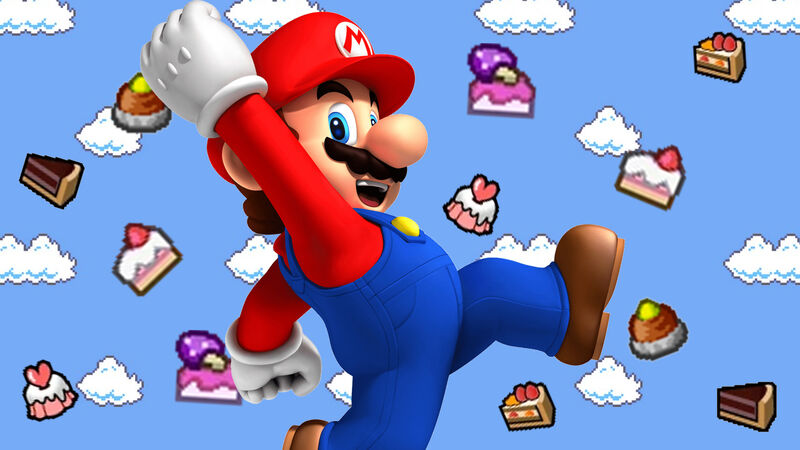 The Delicious Evolution of Mario’s Cake

Grab your forks, because we’re celebrating the 25th anniversary of classic 3D platformer Super Mario 64! As with any anniversary, we find that it’s best to celebrate with an extra helping of something sweet. In the world of Mario, cake is more than a delicious treat—it’s also a plot device, health item, board map and so much more. So finish up your dinner, and get ready for dessert—we’re taking a look at all of the cake in the Mario franchise.

Are those wedding bells we hear? Up first we have a wedding cake that is so good… it might kill you! In the events of Super Mario RPG: Legend of the Seven Stars, Mario, Princess Toadstool, and Bowser all get sent flying in opposite directions thanks to the big bad member of the Smithy Gang: Exor. Princess Toadstool unfortunately lands at a place called Booster Tower. Booster is a pretty crazy and naïve character who hangs out with three Snifits. When Toadstool lands at his Tower, he decides that fate thrust her into his life and that he must marry her. They then go to the town of Marrymore where Booster hires Chef Torte to make their wedding cake for them.

This wedding cake seems to have a lot going on. Three layers covered in frosting with stars on the top layer, what looks like a gingerbread layer in the middle, followed by a raspberry bottom with some sort of candy cane sticking out. Ambitious! Maybe a bit TOO ambitious, as the cake starts to move once Chef Torte finds that Mario is trying to stop the wedding. Chef Torte runs in terror when he realizes the cake actually is moving. Mario and his party must fight the rampant cake, known as “Bundt,” all on their own.

After dealing enough damage, the top two layers of the cake are defeated, leaving only the bottom layer, known as “Raspberry.” Eventually, Booster arrives and, thanks to his pump-up squad of Snifits, is motivated to eat Raspberry whole in one bite.

A frightful event to behold for sure, but according to Booster, the cake was so delicious, he could cry. So, congrats to Chef Torte for making a cake that’s to die for!

“Dear Mario, please come to the castle. I’ve baked a cake for you. Yours Truly– Princess Toadstool, Peach.”

These famous words may have been a lot of folks’ entries to cake in the Mario Universe! Super Mario 64 introduces us to the first Princess Peach cake, which just looks mouthwatering delicious!

As stated in the letter from Peach to Mario, “I have baked you a cake.” This cake is DONE! But upon arriving, Mario discovers that Bowser has taken the castle and has captured Princess Peach. In order to save Peach and eat some of that cake, Mario has to reclaim the power from the Power Stars to open up the pathway to the top of Peach’s Castle, defeat Bowser, and save the day!

Princess Peach’s cake is seen in the final shot of the game, thanking not only Mario for saving the day, but also thanking you, the player, for playing. We can see that this cake has two layers and seems to be a moist yellow cake with homemade frosting topped with Berries as well as cake toppers featuring a Super Star, Mario, and Peach. In Super Mario 64 DS, we see the same cake, but all of the playable protagonists are also added as toppers: Luigi, Wario, and Yoshi. We’ll take another slice, please!

Talk about a great party host! Princess Peach outdoes herself by making an extravagant birthday cake for herself that features the rest of the Mario Party playable characters. This cake really does feel like a reflection of who she is as a character, and looks to be a double-layer strawberry cream cake with homemade buttercream frosting and Jordan Almonds. The cake has magical properties as well, as the winner’s stars create a giant star that causes the cake to light up. It is finished with figures of the winner, second & third place players. You definitely want to be in the top three, since it seems that Peach sends the loser to be eaten by her Piranha Plants… “Very off with their head” of Peach, she’s not messing around!

The map has a ton of Happening Spaces, where players can plant a Strawberry Seed for 30 coins. If ONLY this actually grew strawberries! No, instead these seeds grow Piranha Plants, setting traps for the opposing players. If someone lands on a Piranha Plant, they will lose a star and the player who planted it will gain a star. Talk about a party favor!

Speaking of party favors, Bowser is hanging out in a bowl of hot fudge sundae that a player can get to by “winning” the flower lottery from Goomba by choosing the seed that sprouts a flower with Bowsers Face instead of toads. The player then has to interact with Bowser who makes you pay 20 coins for an inedible piece of cake that looks like Bowser’s shell with candles lit. Gross… we’ll pass on seconds, thanks.

Ah yes, the “we’re in a house, in space, with giant toys and food” galaxy. The Toy Time Galaxy in Super Mario Galaxy has a lot of mystery to it. First on our list of questions: who made these delicious-looking cakes Mario is jumping around on? Rosalina? Celestials? Mary Berry!?

While the history remains unknown, what we do know is that these are still some top-tier cakes here! As Mario flies into the mission “Bouncing Down Cake Lane” from the launch star at the back of the toy train, he lands at the bottom of a three-layer fruit sponge cake. Here, Mario must don the Spring Mushroom ability and bounce between the slices of cake! Once atop Mario proceeds to bounce forward over some chocolate bars and onto his next piece of cake—orange, this time.

The next cake we see in this galaxy is a massive three-layer strawberry cake. Here Mario must blow out all of the candles in order to create a Launch Star. The Launch Star takes Mario to his final cake, a giant three-layer fruit tart, where he must defeat an Undergrunt Gunner.

Is this a buffet? Because I’m getting stuffed!

If this was The Great Mushroom Kingdom Bake-Off, this next cake would have sent the baker home immediately. Princess Peach is having a birthday party and for the first time, she doesn’t make the cake herself. Instead, she receives a dense, dry-looking two-layer vanilla cream cake, which turns out to be a trap set by Bowser Jr. and the Koopalings. They jump out of the cake, throw the cake on top of our birthday girl, and carry her away to an airship. Lesson learned, Peach! Always bake your own cake!

This cake also makes an appearance in the end credits of Super Mario Galaxy 2 with the addition of a bunch of Yoshi Fruit. Look, if Peach loves this cake so much that she’d have it made again, then maybe we’re judging a book too much by its cover.

The Shiverians, who live in the Snow Kingdom in Super Mario Odyssey, may have the best cake in the entire Super Mario franchise: The legendary Frost-Frosted Cake. In the Snow Kingdom’s brochure, you can read all about how this kingdom is known for their exquisite five-layer cake that is popular in weddings and can only be made by the Shiverian Elder. Covered in the best-looking frosting and piped expertly to give a regal finish, this cake was a must-have for Bowser’s wedding plans.

Traditionally the Frost-Frosted Cake is meant to go to the winner of the Bound Bowl Grand Prix, which Mario enters by taking control of a Shiverian. Since Bowser and the Broodals stole the cake, the winner in this case would receive a Multi Moon. We guess that’s a pretty good replacement… but definitely doesn’t taste as good!

The Paper Mario series is no stranger to cakes. In the original Paper Mario you are able to find Cake Mix in Shy Guy’s Toy Box which can heal your FP by one point. If you bring the Cake Mix to the Toad chef Tayce T., she can bake a slice of strawberry cake for you. Give a cake slice to Gourmet Guy, a large Shy Guy, in order to advance the plot. A cooked cake serves as one of the most important FP recovery items in the game as well, healing 15 FP instead of the single FP the cake mix alone gives you.

Continuing with strawberry cake tradition, Paper Mario: The Thousand-Year Door nonetheless uses this familiar slice in an unusual manner. In Chapter 3 of The Thousand-Year Door, Mario enters the city of Glitzville and enters a fighting arena called the Glitz Pit under the alias The Great Gonzales. The team decides to join this tournament since a Crystal Star seems to be attached to the Champions Belt. This is some really incredible Paper Mario storytelling that deals with fame, corruption and sabotage!

While in the tournament, Mario receives a piece of cake from a mysterious fan! If Mario and his partner eat the cake, it restores all of their stats. A little later in the game though, Mario is sent another piece of cake from another mysterious fan. This time, though, it makes Mario’s partner feel sick before Mario can have a bite. It’s been poisoned by the reigning champ Rawk Hawk! That cheater! This malicious act forces Mario to enter the next fight all by himself. This piece of cake isn’t worth the pain!

Look, if you haven’t played Paper Mario: The Thousand-Year Door, make sure to get on that ASAP. It’s a top-tier Mario game that also has cake in it. Get on it, fam!

Anyone else love a good rivalry? In Bowser’s Inside Story we are introduced to one of Fawful’s minions: Midbus. Midbus is like a reflection of Bowser; they have the same mannerisms and use their brute strength to handle any situation. Bowser ends up fighting Midbus multiple times throughout the game.

In the fight at Fawful Theater, the audience will sometimes throw a piece of that infamous strawberry cake up on stage for Midbus to eat, healing some of his health. Bowser can instead attempt to inhale the cake, if he is successful in doing so, then Bowser will get the health regeneration.

Cake deserves so much more credit than it gets in the Mario franchise. Serving as a great plot device, healing item, board map or a thank you for playing, it gets a spot as a top-tier item in our book. We can always count on Nintendo to make sure that these games are super fun, and the addition of cake makes it all just a little sweeter.

Thanks for joining us on this tasty adventure. Want to learn more about Super Mario Bros? Be sure to check out our official Mario wiki!

Matt Acevedo
TheMattAcevedo
Matt Acevedo is a producer, writer, gamer & comedian in Los Angeles. You can find him on Nintendo, Funimation, Oh My Disney, Nerdist, HyperRPG & more. He hopes to one day be "King of the Pirates" & convince his landlord to lift his "Puppy Ban."