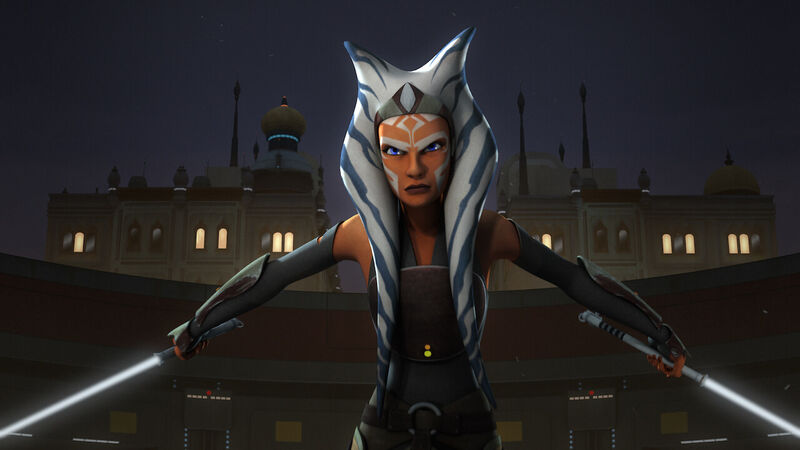 Star Wars fans who watched Star Wars: The Clone Wars, the animated series that ran from 2008 to 2014, were introduced to one of the best characters in the entire saga when the show first premiered: Ahsoka Tano, the Padawan learner of Anakin Skywalker. Eight years ago today, on Jan. 29, 2008, Ahsoka was announced as a character on the show and the world got its first glimpse at Anakin’s apprentice. That led to questions that lasted for years, chief among them was how Anakin could have an apprentice who was never mentioned in Star Wars: Revenge of the Sith. There was natural skepticism.

As Ahsoka was introduced and audiences saw her grow over time, though, not only did we get to follow the story of one of the coolest characters in Star Wars history, but we also saw just how important she was to the mythology of the saga, to characters like Anakin, and — once she was re-introduced in Star Wars Rebels — the rebellion against the Empire.

In honor of the eighth anniversary of Ahsoka’s announcement, here are my eight favorite Ahsoka Tano moments and stories from Star Wars: The Clone Wars and Star Wars Rebels.

Audiences weren’t the only ones surprised by the fact that Anakin Skywalker was given a Padawan. Anakin himself was shocked to learn that Ahsoka, who arrived as a courier from Master Yoda during the Battle of Christophsis, was assigned to be his apprentice. Anakin argued against it, but he and Ahsoka soon formed a close bond and their ability to work together was on full display during the Battle of Christophsis and the ensuing mission to rescue Jabba the Hutt’s son from Count Dooku. Ahsoka proved adept at heeding Anakin’s training and was quickly able to take on battle droids and Sith assassins alike. The playful banter between master and apprentice even led to them giving each other nicknames: Ahsoka called her new master “Skyguy,” while Anakin called her “Snips” because of her often-snippy remarks.

It came as no surprise that the apprentice of the Chosen One would become one of the most skilled Jedi warriors of the Clone Wars. Ahsoka put those skills to the test during the Second Battle of Geonosis, when the Republic entered a tough fight to reclaim Geonosis — the world on which the Clone Wars began — from the Separatists. Ahsoka worked alongside fellow Padawan Barriss Offee during the battle, when the two were cut off from Anakin, Master Luminara Unduli, and the rest of the Republic forces. The masters feared their apprentices were dead after they were trapped underground, but the apprentices survived and forged a close friendship — a friendship that would ultimately have major consequences for the Jedi Order.

Heroes on Both Sides

War isn’t easy. What is easy is being caught up in a frenzy and believing that your enemies are monsters. For Ahsoka, she had little reason to believe otherwise when every Separatist she ever met was either a battle droid or a Sith trying to kill her. That all changed when Ahsoka teamed with Senator Padmé Amidala on a secret mission to Raxus, the Separatist capital, where Padmé hoped to begin a peace process with her old friend, Separatist Senator Mina Bonteri. It quickly became clear that Mina was not a monster, nor was her son, Lux Bonteri. Ahsoka learned that Lux’s father was killed by clones while setting up a Separatist base, and that, despite their loss, Mina and Lux were not interested in destroying the Republic. Like the people of the Republic, many Separatists just wanted to live in peace, despite whatever evils their leaders were unleashing. This taught Ahsoka that the war was not as black and white as she had once believed.

During the Battle of Felucia, Ahsoka was captured by Trandoshan hunters and brought to Wasskah, where Trandoshans had been bringing captive Jedi younglings for years. While the younglings who remained preferred to stay hidden from the Trandoshans, Ahsoka wasn’t about to sit still and be a captive. She organized the younglings to fight and even joined forces with another prisoner: a Wookiee named Chewbacca. Together, they fought off the Trandoshans and escaped. Ahsoka returned to the Jedi Temple, where Anakin blamed himself for what happened. Ahsoka disagreed — it was his training that helped her survive, and it was her moment to shine without her master.

In order to fight the Separatists who had invaded their homeworld, the rebels of the planet Onderon asked for help from the Jedi, but the Jedi Council and the Republic were not willing to become directly involved. Instead, they sent Ahsoka, Anakin, and Obi-Wan Kenobi to train the rebels to combat the Separatists and ultimately liberate their planet. This Jedi-trained rebellion helped plant the seeds for what would eventually become the Rebel Alliance, and the skills that Ahsoka learned in fighting with a rebellion against a much larger enemy would prove valuable later in life.

Disillusioned with the Clone Wars and the Jedi Order’s involvement, Barriss set off a bomb in the Jedi Temple, killing numerous Jedi and civilians alike. She framed Ahsoka for the crime and Ahsoka was labeled a traitor and a terrorist. She was imprisoned by Admiral Tarkin, but she was able to escape and went on the run to try to find the real culprit and clear her name. Through it all, Anakin never gave up on her, even after she was put on trial for the crime. He uncovered Barriss’ treason and Ahsoka’s name was clear, but she couldn’t escape one harrowing fact: the Jedi Council didn’t trust her, and had even expelled her from the Order. Though they offered to reinstate her, Ahsoka chose not to return. She walked away from the Jedi Temple, leaving Anakin behind as she made her way into an uncertain future.

That uncertain future led Ahsoka to join the growing rebellion against the Empire, organized by Senators Bail Organa and Mon Mothma. Ahsoka coordinated with rebel cells across the galaxy and kept her identity hidden, operating under the shadowy alias “Fulcrum.” One of the rebels she coordinated with was Captain Hera Syndulla of the Ghost. “Fulcrum” often gave Syndulla and her rebel cell missions and supplies needed to combat the Empire. After Kanan Jarrus, a Jedi on Syndulla’s crew, was captured and taken to Mustafar, Ahsoka led a rebel fleet there and helped in Jarrus’ rescue. It was then that “Fulcrum” revealed her true identity as Ahsoka Tano and said that the rebel cells were beginning to work together in a larger rebellion — one that would eventually give rise to the Rebel Alliance.

Ahsoka vs. the Inquisitors

While working with the rebellion, Ahsoka encountered the Sith Lord Darth Vader and saw inside his mind — and she grew suspicious that Vader was none other than her former master, Anakin Skywalker. While on the hunt for more information about the mysterious Sith Lord, Ahsoka learned that two Inquisitors — the Seventh Sister and the Fifth Brother — were kidnapping Force-sensitive children for the Empire. She sent the Ghost crew after the missing children, but she too joined the fight and fought against the two Inquisitors. It was here that Ahsoka showed off just how skilled a warrior she had become since the Clone Wars, easily dispatching the two dark Force users with her white-bladed lightsabers.

What are your favorite Ahsoka Tano moments? Join the discussion on Wookieepedia!

Would you like to be part of the Wikia team? Join our Fan Contributor Program and share your voice on Wikia.com!