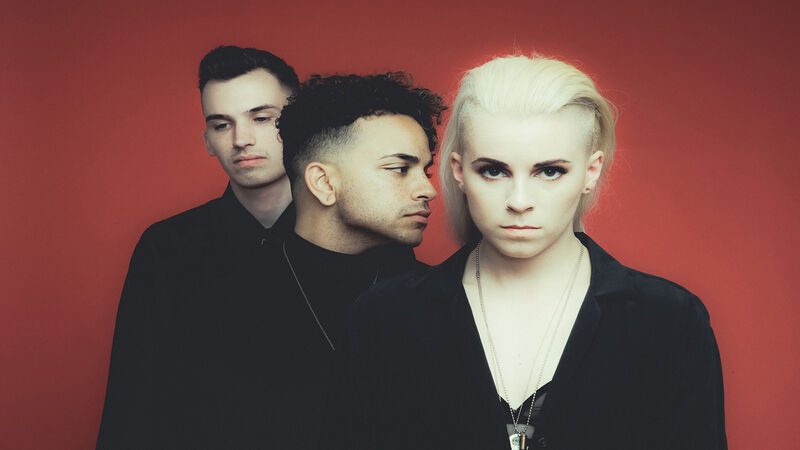 The Games That Rock Pvris’ Tourbus

In the last few years, Massachusetts’ Pvris have cemented themselves as one of the hottest names in modern rock. Serving up a unique blend of synth-pop and post-hardcore, this noir-tinged trio – think The Cure gone emo – are stadium headliners in waiting.

What you may not know about them, however, is that their love of huge-sounding anthems is only rivaled by their passion for gaming.

Currently touring their critically acclaimed second full-length record,  All We Know of Heaven, All We Need of Hell, we caught up with the band’s gaming mad guitarist before their return to the UK later this month. Alex Babinski hardly ever does interviews, preferring to leave the talking to the bands singer, Lynn Gunn. “But that’s because nobody ever wants to talk about games! I am all about videogames. I can talk about videogames all day!”

Here’re the games that keep Pvris sane on the road.

Hey Alex. Let’s start with how you got into gaming?

“Oh man. Well, I grew up with two older brothers, and they’d play all the time and I’d watch them play. between my brothers and I, we had every system growing up. Genesis, Atari, GameCube, Dreamcast, PS1, and then when I was a kid, one Christmas, I got a Nintendo 64 and I was all in. That was my console, no question. I’ve been a Nintendo guy since then.”

What’s the game or games that first got you hooked?

“My favourite game series ever is Final Fantasy, specifically one, seven, eight and ten. Those were the first truly life-changing games I ever played. I loved the stories – I’m a big RPG fan now, but I’d never played anything like that before I played those games. I have played those games for thousands of hours. And I could play them for a thousand more. I’ll play everything, but RPG’s are my favourite. Actually, I’ll play everything other than racing games! I don’t even have a car or a licence in real life, so they just don’t appeal…”

Is it hard to keep up with your gaming when you’re on the road with Pvris?

“Oh it’s fine. The band get concerned about me a bit, because I’ll sit in my room playing for hours. I’ve got something called a GAEMS Vanguard case. It’s this thing where I can take consoles with me on the move. It’s currently got a PlayStation in there, with a 19” monitor, and it travels all over the world with me. I’ll pull it out in hotels, backstage at venues, even at airports when flights are delayed.”

Amazing. What games do you currently have out on tour with you?

“So, the only games we really play as a group are Fortnite and Call Of Duty, but personally, I’m playing a tonne of stuff at the moment. I’m really focused this year on getting all of the achievements in a few games I’ve never been able to do that with before, mainly the Dark Souls games. I think the Dark Souls series is to me as an adult, what Final Fantasy was to me when I was a kid.

I love it because it’s so hard! It’s a true challenge. I’ve been doing the same on Bloodborne and I recently beat Far Cry 5. I really like that game. I really like that landscape, the Pacific North West, all the lakes and mountains and stuff. I just like wandering around there really. I just wish I could do it without everything wanting to kill me.”

Tell us about it. Bloody turkeys. What’s your next fix?

“Today I literally just beat God Of War, but I’ve got to go back and unlock everything now. That’s a great game. I really enjoyed the first couple, but I kinda lost interest in the others. I was so excited about this one. It’s much less hack ‘n’ slash than I expected it to be, and I thought that was a really cool evolution for the series. I bought it digitally and the venue Wifi was so bad for about four venues in a row, so it took me ages to download it. That was really frustrating!

Almost as frustrating as the ending of the game, actually. It finished so abruptly! I literally finished it about thirty minutes before talking to you now, so I’m still processing it…”

So what are you excited about playing that’s coming down the line?

“Well, the remaster of the first Dark Souls game is so close! That’s the most excited I’ve been about a videogame release in a long time. I always get all the sports games too. Baseball, hockey, football… I’m not really a FIFA guy. I’m just terrible at it and it frustrates me. Brian [Macdonald] our bassist is crazy about FIFA though. He’d play that over any game.”

Have there been any Pvris/gaming crossovers yet?

“Not yet, sadly. Lynn [Gunn, Pvris singer] did a song with a DJ that got on one of the NHL hockey games. I really want Pvris to get on one so badly. As a kid, I’d find so much music I loved from videogame soundtracks. I discovered so many bands I liked from Rockband, or Tony Hawks. Man, I adored the Tony Hawks games.

I’ve got a friend in Paris, the actual Pvris, who works for PlayStation and he feeds me games. Maybe we can get us on a soundtrack somewhere down the line…”

We hope so too. So last question. Your tourbus is on fire. Do you save your musical equipment or your gaming stuff?

“Oh what a question. Hang on, let me look at the bus. I think it would have to be my games. I could get them out in a backpack quickly… and anyway, my instruments are insured.”

PVRIS PLAY SLAM DUNK FESTIVAL ON SUNDAY, MAY 27. THEIR NEW ALBUM, ALL WE KNOW OF HEAVEN, ALL WE NEED OF HELL, IS OUT NOW.