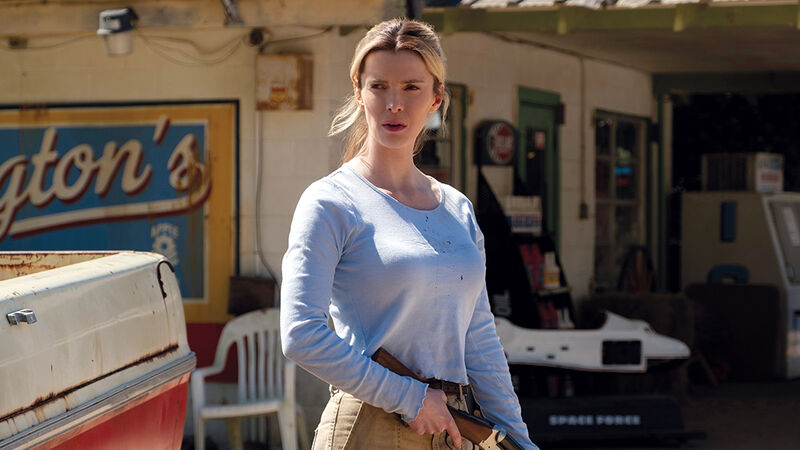 You wait ages for a controversial movie, and then two come along at once. It seems like just yesterday that the global conversation was all about Todd Phillips’s Joker, which was criticized for glorifying gun violence. In fact, it was literally still being talked about yesterday, amid all the end-is-nigh fears (just check the hashtag). And then The Hunt pitched up. Targeted for its violence in a similar way – in particular due to a trailer released last year in which the focus was on gunplay – the film’s supposed politics were called into question. This was prompted and magnified by a certain prominent head of state who took issue with, as he saw it, the film’s “Liberal Hollywood” standpoint.

The Hunt’s intended opening date was pushed back as a result, but it’s finally getting its release this week. We’ve yet to see how it performs at the box office – though it’s fair to say the current coronavirus outbreak will probably affect results.

But controversy makes money, that’s for sure. Joker took $1.074bn worldwide during its 22-week reign at the box office making it the highest-grossing R-rated film ever made.

“I feel like the one place where there’s similarity is this sort of idea of worry, you know?” notes Lindelof as we chat, of the comparison between the reaction to both Joker and The Hunt. “We’re worried about the fact that the movie is going to inspire violence, which is a reasonable [concern], you know… we’re very stressed out as a worldwide culture right now.”

But for Lindelof, the worry is actually rooted in repulsion at what we’ve become, and the fear of what we see when we hold a mirror up to society.

Lindelof seems to hold the belief that art imitates life rather than the other way around.

A Legitimate Demand for Responsibility

Lindelof concedes that the writer must, however, take a responsible and considered approach to the material: “I think that the conversation beneath the conversation is, what is the responsibility of the storyteller? And, like, is it provocative? Are you just making fun of people to get them to go to the movies, etc? There is a just and legitimate demand for responsibility.”

Lindelof points out that there’s a critical point of difference between his movie and Todd Phillips’s – and that’s satire.

“That’s where I feel like the divide between our movie and Joker separates,” he says. “Joker is not really a satire, but it’s using a character that everyone is familiar with, who is essentially famous for being a sociopath. It’s not Todd Phillips’s and Joaquin Phoenix’s fault that we love the Joker, you know, and literally three actors who have portrayed the Joker have been nominated for Academy Awards, and two of them have won them. So, I think the more interesting question [here] is, why are we so fascinated with sociopaths? And, less, you know, ‘Is Joker responsible?’ Or ‘Is Joker going to incite violence?’”

Lindelof is intelligent and thoughtful, and his back catalogue of work shows that (whatever you may think of the ending of Lost). Lindelof’s recent hit series, Watchmen, has been roundly appreciated, and tackles social and cultural issues. There are certainly some contentious subjects raised throughout those nine episodes – violence included. Although its violence isn’t the main talking point of the series, and Watchmen hasn’t stirred controversy the way The Hunt or Joker has, or, indeed, other big-screen releases of the past.

“Whether people like [The Hunt] or don’t like the movie, that’s always a legitimate conversation, of course,” he says. “The idea that the movie was dangerous, or that it condones violence… that’s completely absurd to me. Why in God’s name would I do that?”

Lindelof’s intention with The Hunt is a little more complex than simply exploring how those at the ‘top’ of the United States’ erroneously labelled classless society look down upon those at the ‘bottom’. But that’s part of it. I suggest it’s in large part about hypocrisy, as well as prejudice, and the fact that human beings are complicated and don’t fit neatly into boxes.

Based on Richard Connell’s 1924 short story The Most Dangerous Game, the plot of the film centres around a ‘game’ known as The Hunt, in which a group of elites kidnap a bunch of ‘deplorables’, plonk them down in the middle of nowhere and start picking them off, one by one. But they don’t bank on Betty Gilpin’s Crystal – something of a wild card, and one who ably and commendably fights back.

“My favorite pieces of satire are current, or what Armando Iannucci did in Veep over here, and [In the Loop],” he says. “So, [I asked] is there a way to do satire for the groundlings? The idea of not being too ‘heady’ and finger-waggy about it — my natural disposition is to lecture — but to encase some ideas about the divisiveness, the cultural divisiveness [in the US]. Because I think it’s more cultural than it is political. The idea of chastising people for making assumptions about other people based on what state they live in or the way that they talk, or what their job is, etc. I felt like it might be nice to watch those people get murdered.”

He says this completely deadpan – it’s worth a reminder here that firstly we’re talking about a film, and secondly, that said film is a satire. It’s Gilpin’s perfectly pitched Crystal who fights, unflustered and unfettered, for survival – and, a little bit, retribution – in The Hunt, meting out death to anyone who might be in on it.

Crystal Clear (But a Bit Impure)

“What’s really interesting to me about this movie, more than anything else, is — independently of how people identify on the political spectrum, whether they’re incredibly conservative or incredibly progressive — they all love Crystal,” says Lindelof. “And so the idea that there is a character in the movie who does not identify as being a member of either tribe, I think is indicative of where a lot of people see themselves. This idea that I have to pick a team, or, if I say to my team, ‘Someone on the other team just said something reasonable’, and then you’ll basically be tarred and feathered. There’s sort of a purity test that’s going on that is of deep concern. And I think that the idea that Crystal is a character who we actually want to be a little bit impure is really interesting.”

It’s probably true to say that as you watch The Hunt, you’ll also judge Crystal a little bit, even if at the back of your mind you’ll also be storing some questions about where the heck she picked up those razor-sharp reflexes and learned to be so resourceful. And that’s partly the point.

“We all got together and said — and Betty felt really strongly about this and I think she was right – ‘Let the audience decide if this entire movie is based on making a judgement about someone else’, as if trying to fit them into a box when, in fact, people are so much more nuanced and so full of contradiction, and, as you mentioned, hypocrisy.”

Turning ‘The Hunt’ Into a Franchise

So is there mileage in The Hunt as a franchise?

“Nick [Cuse] and I, and Craig [Zobel, director], certainly started to talk about what might happen next, just in the exploration of the story,” says Lindelof. “And for us, the really fertile ground is the idea of conspiracy theory writ large, versus just calling the movie The Hunt 2 and then having, you know, another hunt in another place. The Hunger Games, of course, was another inspiration for these movies. And the idea that that franchise ultimately started to migrate away from this specific contest of the Hunger Games and became about a cultural revolution, and overthrowing of the classist society that was basically in the future. And so for me, the question just becomes, are there other crazy conspiracy theories out there that, if they become true, Crystal now has the great pleasure of decimating one by one?”

In The Hunt, following a leaked text message, the internet gets wind of the game, and news of it circulates until it grows into some kind of urban legend – or conspiracy theory – dubbed ‘Manorgate’. Of course, it winds up being true. But was Crystal in on it from the start?

Lindelof reckons it could be fun to take this novel approach to a possible franchise, and explore Crystal’s background in a sequel.

“It could be interesting; it could be revelatory,” he says. “I think that the tone of these movies… people like the violence, they like the thriller aspects, but they also love the ability to laugh at the absurdity of it all. And I feel like if we lose that element, then it’s not this franchise anymore.”

The Hunt is out now in the UK and hits screens in the US on March 13.