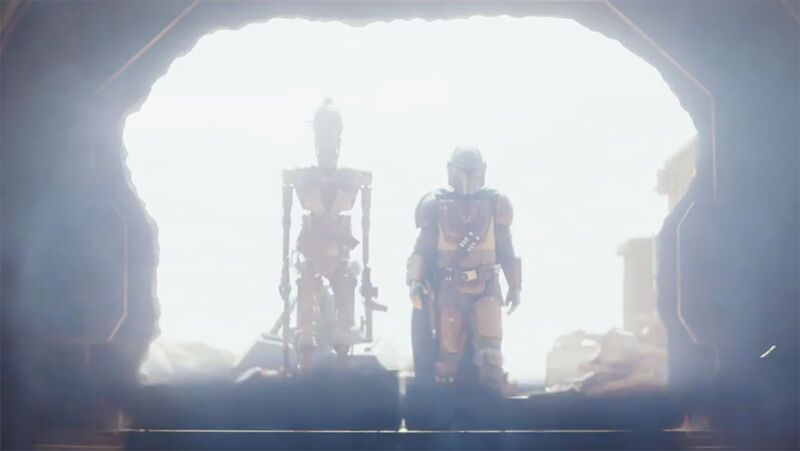 Disney used their big D23 Expo convention this past weekend to debut the first full trailer for The Mandalorian. The upcoming Star Wars series — the first-ever in live-action — is coming to Disney+, which will debut on November 12th, when the new streaming service launches.

The trailer instantly got a ton of big reaction, including among Fandom’s own Star Wars community, Wookiepedia.

A poll at Wookiepedia asking for the initial reaction to The Mandalorian trailer found 90% of those responding feeling positive about what they’d seen at the time this story was published, with a tied 45% and 45% for both “It’s perfect!” and “I’m digging it!” Only 2% clicked on the most negative option, “Not feeling it.”

Many Wookiepedia community members expressed enthusiasm based on the footage, though some were more tempered, while noting what they’d like to see in the series.

StarTargaryen: “With Jon Favreau overseeing it I think it will live up to the hype.”

Shulzeb: “Hope it lives up to my expectations. A series about a mando living a life as a bounty hunter, taking jobs with no care as to whose side his clients are on, just how much they pay.”

SpEdEd: “I’m hoping there are overarching themes of Mandalorian values and conflict amongst Bounty Hunters, Mandalorians, and the New Republic.”

Responding to a thread asking what looked the most exciting about The Mandalorian, Christian Holmes replied, “Looking very forward to seeing an IG in action!”

Christian was not alone in this, as the glimpses at the droid 1G-11 in the trailer caused a ton of interest on the page for 1G-11 himself, while also leading to a massive 3500% jump in traffic over the weekend on the page for IG-88, the droid who first introduced fans to the IG-series in The Empire Strikes Back.

Curiosity about the title character’s background also led to the Fandom page for the Mandalorian people jumping 1144% in the two days after D23.

Pedro Pascal stars in The Mandalorian, though it’s notable we never see him take off his helmet and reveal his face in the trailer. Still, Pascal’s new role looked to also have folks thinking back on an old one, as The Mandalorian trailer debut led into a 53% jump in traffic over the weekend on the Game of Thrones community page for Pascal’s memorable role as the Red Viper of Dorne, Oberyn Martell.

One other spike we saw? 303% more people were visiting the page for Mandalorian armor. Which makes sense, because whether it’s Boba Fett, Sabine Wren, or The Mandalorian, that armor sure is cool looking.

The Mandalorian is executive produced by Dave Filoni and Jon Favreau. Set after the events of Return of the Jedi and the fall of the Empire, the series follows the travails of a lone gunfighter in the outer reaches of the galaxy far from the authority of the New Republic. At D23 Expo, Favreau described the series as set in a time and place in Star Wars history where “The gunfighters are roaming and the people are fighting for their own safety. It’s a dangerous world.”