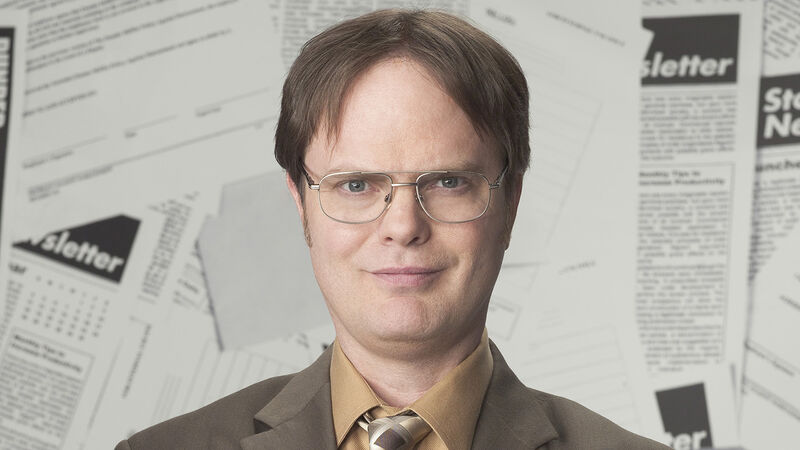 How Dwight Schrute’s Hobbies on ‘The Office’ Humanize Him: Fandom in Fiction

Fans connect to their favorite characters for many reasons, and sometimes it’s by seeing those characters as fans themselves. Our new recurring feature Fandom in Fiction takes a look at those times when we learn just what makes these fictional folks geek out.

If you were to pick a single character who is most important to the legacy of The Office (okay, who isn’t Michael Scott), a strong case could be made for Dwight Schrute. As played by Rainn Wilson, from the very beginning of the series Dwight was a package of, more often than not, annoying quirks that somehow coalesced into a clear whole — the co-worker who you pray you’ll never have to share an office with.

As the beloved US remake of the UK series celebrates its 15th anniversary this week (the pilot aired on NBC on March 24, 2005), it’s still impressive how quickly Wilson not only found Dwight’s voice but made him feel distinctive from Gareth Keenan, Dwight’s original British equivalent (played by Mackenzie Crook). It helps, of course, that Wilson as an actor has demonstrable range but does fall easily into a specific type — that of the resident weirdo. Before The Office, his most prominent TV role was as Arthur on Six Feet Under, the unnerving new intern at the Fisher family mortuary. And it was only a few months after the premiere of The Office Season 1 that Wilson also guest-starred in the Entourage Season 2 episode “I Love You Too,” playing a malicious movie blogger whose secret interests are a lot less wholesome than Dwight’s.

Let’s take a look back at how Dwight expressed his own fandom on The Office — or put up with Jim using it against him.

Dwight’s passions and interests, beyond his unique approach to office politics — slavish loyalty to the company blended with a love of Machiavellian gameplay — are a big factor in what defines him as a character. But what’s fascinating about Dwight is that while he definitely falls into stereotypical nerd tropes, there’s a unique spin to them. The first details we learn about him in the pilot have nothing to do with pop culture — Michael introduces him to Ryan by saying “So Dwight, tell him about the kung fu, and the car and everything,” at which point Dwight starts getting into the technical specs of his 1978 Nissan 280Z. Minutes later, he reveals he’s a volunteer sheriff’s deputy.

In the second episode of the series, Dwight reveals that he’s at least conversant in pop culture when, during the Diversity Day meeting, he presents his own definition for what a hero is: “A hero kills people, people that wish him harm… A hero is part-human and part-supernatural. A hero is born out of a childhood trauma, or out of a disaster that must be avenged.”

But what moments like that revealed about Dwight early on is that he’s obsessive, but largely uninterested in being passive about his passions. Instead, he wants to live them, buying into the fantasy that “Everyone has a hero in their heart,” and in Season 2, bragging about being Sempai at his dojo (or, as Jim points out, “assistant to the Sensei”).

It’s only in later seasons that his exact pop culture interests come out — on Fandom’s list of Recurring Cultural References, Dwight is responsible for a large majority of them (the exception being any callbacks to Saturday Night Live, which is prime Michael Scott territory), but his primary favorites prove to be Battlestar Galactica and the Harry Potter universe. Loving Harry Potter is hardly unique amongst sitcom characters — Leslie Knope of Parks and Recreation happily reveals her fandom whenever it comes up — but the casual way Dwight incorporates references into his life, such as naming his beach games team “Gryffindor” ring true to the nature of not just his fandom, but fandom in general.

Battlestar seems to be his most passive interest, and thus the most stereotypically nerdy aspect of his character — which is perhaps why it’s one of the three that Jim mentions while imitating Dwight in the iconic cold open for the Season 3 episode “Product Recall.”

They make “Bears. Beets. Battlestar Galactica.” t-shirts these days; wearing one of those would arguably be even nerdier than Dwight’s own BSG sweatshirt.

The show more often than not positions Dwight in an antagonistic role, but while he literally dresses up as a Sith Lord in the show’s first Halloween episode, that doesn’t tie too often into him being a fan. In fact, one of the character’s most hilarious moments of all time comes in the Season 5 episode “Business Ethics,” when Jim — deliberately trying to push Dwight into wasting company time on something personal — starts inaccurately describing the plot of Battlestar to Andy: “I mean I like all the crazy monsters and stuff, you know like Klingons and Wookies and all that…”

Dwight somehow manages not to snap, even when Jim describes the show as “practically a shot for shot remake” of the 1970s original, but the torture on his face is him at his most relatable. While sometimes it’s hard to understand all of the different pieces of Dwight’s personality, as a whole they end up making sense. And anyone who understands the joy of nerding out over something might find Dwight’s fandom to be one of his most likable aspects — because we can see ourselves in him.