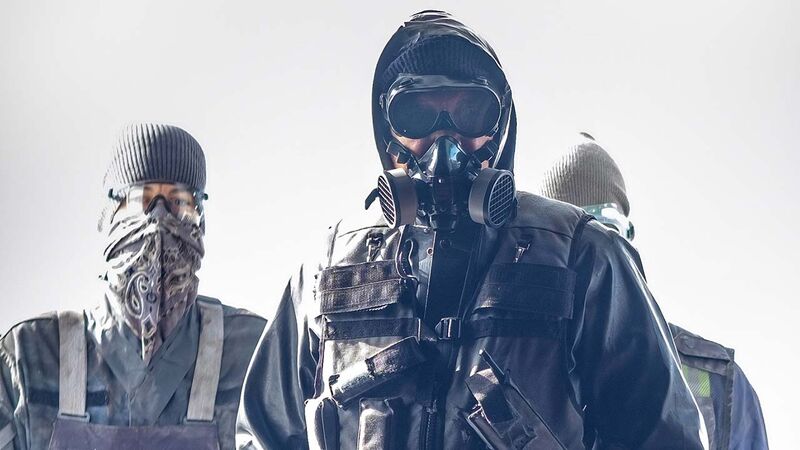 A shiny new adaptation of Stephen King’s legendary apocalyptic tome, The Stand, is headed to CBS All Access, premiering December 17.

Unlike the one previous adaptation, a 1994 miniseries, which clocked in at around six hours, this new version, shepherded by The New Mutants’ Josh Boone (who directs the first episode and the finale), comes in at close to nine hours in total – and that’s including a new coda, written by King himself more than 40 years later, that will comprise the ninth and final episode!

In The Stand, a government-made plague escapes a lab and wipes out 99.4% of all humanity. The few immune survivors are then drawn into a dangerous and vital conflict, between the forces of good and evil, over rebuilding the world. It’s a famously massive and sprawling story, and one that couldn’t have come at a stranger time as the real world itself struggles under the weight of a pandemic.

Fandom spoke to the showrunners, Justified’s Ben Cavill and Taylor Elmore — as well as key cast members James Marsden, Amber Heard, Greg Kinnear, and Jovan Apedo — about what it was like to finish shooting the series right as the world went into lockdown, Stephen King’s new coda, and how The Stand shouldn’t be seen as a “pandemic story.”

IT’S ABOUT WHAT COMES AFTER

Because of the timing of The Stand’s release, it will be almost impossible for viewers to not draw comparisons and parallels between the outbreak depicted in the series and COVID-19. Of course, in the story, the virus, dubbed “Captain Trips,” is just the jumping-off point.

“What we’re living through now is a very different thing,” James Marsden, who plays Stu Redman, said when asked about comparisons to the COVID-19 crisis. “My first instinct was ‘Is this gonna work? Is this responsible, to tell this story right now?’ I feel like there was great sensitivity in cutting these episodes together and not making anything look like we’re trying to get it out now because it’s more relevant than ever. The book has always been, for me, about what happens after that. The pandemic is a catalyst to the bigger story.”

“I’d be lying if I told you it wasn’t surreal though,” Marsden shared, “when the first week or two of March came around and we were wrapping up, and we were shooting a scene where I was laying on the ground and people were running around me and dust was getting kicked in my face, and 70 people were on set, and we’re shooting a show based on a book about a pandemic that wipes out 99.4% of the population.”

Ben Cavill agreed the story’s virus shouldn’t be the single focal point. “I don’t believe The Stand is a book about a pandemic or a plague,” he explained. “What I really think it’s about is this question of ‘If you had the chance to press the reset button on humanity or human civilization, what would you do?’ How would you behave? What are the fundamental rules? What if we were back to the state of nature? Would we build everything back to the way it is now or would we try something different and avoid the problems we know have arisen in the course of the development of human civilization?”

Greg Kinnear, who plays survivor Glen Bateman, also remarked about the coincidental timing. “I came home on the 14th of March from Vancouver and two days later the NBA shut down,” he said, “so the timing of it is extraordinary. The fact that I’m sitting here on a Zoom call, a company I’d never heard of a few months ago, and I’m zooming with you in a pandemic about show that deals with a pandemic, knowing people will want to connect their own experience with this situation, and with Stephen’s… But if you’ve read that book you know it was a nuclear bomb situation of a pandemic. No one was surviving in The Stand. Almost everybody is lost. And it happens very very quickly. I don’t know the parallels people will draw, but we’ll see.”

Those who survive Captain Trips in The Stand are soon lured, through shared dreams, into a new landscape consisting of a “good” colony in Boulder, Colorado, nurtured by Whoopi Goldberg’s Mother Abigail, and the debaucherous “evil” city of Las Vegas, tyrannically ruled by a man calling himself Randall Flagg – aka “The Dark Man.” King fans will know Flagg as a perennial painmaker in other books, like The Eyes of the Dragon and The Dark Tower series.

But the struggle in The Stand goes way beyond fairy tale versions of good and evil.

“We hesitate to call it a tale of good vs evil, because even on the evil side, within that spectrum, there are degrees of moral turpitude and questioning,” Taylor Elmore said. “It’s not as stark. Randal Flagg is the apotheosis of evil but the people who are gravitating towards him are just people. People who are just trying to figure themselves out. Some of them are evil and some of them are bad but some of them are just mixed up.”

“It was really important that we really dug into the nuances of how it’s not just Randal Flagg, the Dark Man, and his evil minions versus the good, awesome people from Boulder,” he added. “That seemed too simplistic.”

Flagg is played cooly and confidently by Alexander Skarsgård, in a way that’s more than your typical “mustache-twirling” villain. Amber Heard, who plays Nadine Cross, noted how Flagg is supposed to feel more real and relatable than the Devil. “He’s meant to serve as a surrogate for our temptations,” she said, “and our baseline desires and impulses. The less socially-conscious. The less empathetic versions of ourselves. But he’s in the between zone. Between full demon, you know, demonic forces that are supernatural and unrelatable, and then someone you can relate to because he does represent that inner part of ourselves that wants to cheat. Or wants to cut corners. Or wants to act out of anger and aggression. And Skarsgård, the genius of him, is that he can play that while being infinitely likable and charming.”

“It’s a fun balance that Alex plays so wonderfully,” Jovan Adepo, who plays Larry Underwood, said, “of good and evil, of making the grey areas even greyer, of what is the good thing to do and what is the bad thing to do. And for those who stand on the side of religion, we forget that the Devil was an angel as well so I think Alex really plays with that.”

The remnants of humanity in The Stand, those who survived Captain Trips, find themselves with the near-impossible task of starting over and developing new societies. Some are drawn to Randall Flagg’s marauding metropolis in Vegas while others, like Marsden’s salt-of-the-earth Stu, settle in Mother Abigail’s Boulder and try to make an earnest go at crafting a new world.

“I think Stu is recognized as an ordinary man,” Marsden observed. “A blue collar worker from Arnett, Texas who finds himself smack dab in the middle of everything when the outbreak occurs. I think he’s a man with a rigid sense of morals. I think he’s meant to be a surrogate for the audience. I think the audience will be experiencing a lot of Captain Trips, and what happens afterwards, through his experience and through his eyes. “

“Stu is one of these characters who finds himself inexplicably motivated by forces that aren’t necessarily there for him to see, and guiding him towards choices he has to make.”

Along the way, Stu pairs up with Kinnear’s Glen Bateman, who has more of a cynical edge to him. “[Glen is] kind of this slightly stoned professor that has a super interesting take on everything in the world,” Kinnear revealed. “In a way, he was more prepared for the end than anyone as he had already resigned himself to the idea that society would find its way to this place. He has almost a gallows humor about it. I think he’s sort of thrown his hands up. I also think his relationship with Stu and some of the characters he meets on the way start to thaw him out a bit. He starts to gain a bit of hope about humanity through this story.”

“I read [The Stand] in high school,” Kinnear said. “The only book of this length I got through, I promise you. And [Glen] bounced off the page at that time for me. I liked his journey on this show and how he was part of everything, but also slightly removed at the same time.”

Also on the path to Boulder are Adepo’s Larry and Heard’s Nadine, two characters in need of redemption – though one of them may be too far gone. .

“Larry always really seemed to me one of those people who wears his heart and his emotions and his insecurities on his sleeve,” Adepo explained, “and that was a fun experience. To get to show the unfavorable side of him and then gradually see him start to make different choices that affect the community versus just him.”

Meanwhile, Heard’s Nadine finds herself uncomfortable and unsettled by the Boulder community. For reasons that date back to childhood. “I think Nadine has always been different,” Heard said, “and has always been an outsider. And part of what makes her real and part of what made me appreciate her as a character, and why people can relate to her, is that she’s an inherently lonely character. She’s an orphan, she’s been on her own forever, and she’s had a very long relationship with Randall. And Flagg has been grooming her since she was a child, which only exacerbates the loneliness.”

Heard then explained how perverse it was that Nadine experiences her first glimpses of goodness after the world’s already in shambles. “[After the pandemic] she develops the first bonds she’s ever had in her entire life,” she said. “Everything in the Boulder Free Zone exemplifies the benevolence of the human spirit, and I think for the first time she is enveloped in a world that embodies the best parts of humanity when she has only seen the worst. She is stuck between a rock and a hard place in that this is the first time she’s ever seen decency in humanity. It’s on the last step of her pathway. She’s been walking down that pathway her entire life and on that last step she meets what it means to be human and to be loved.”

Stephen King fans who are simply excited to see a modern adaptation of one of his most famous books will most assuredly be going out of their minds at the idea of a brand new ending for The Stand, written by King, which will comprise the finale. Marsden himself was super stoked about the story update.

“I can’t tell you how enthusiastic and thrilled I was when I heard he was doing it,” Marsden said. “I’ve always viewed The Stand as one of his top books. It’s a masterpiece. There’s so much to it and the fact that Stephen gave us his stamp of approval to go ahead and make this…and we’ve been afforded a little more time than the miniseries had in the ‘90s. His presence was felt throughout the shoot. He was just jazzed we were retelling this story. He’s one of the greats.”

“It’s one thing to bring The Stand to a new generation, a new audience, but also to have an original piece of work from Stephen is just icing on the top.”

The Stand premieres Thursday, December 17 on CBS All Access.