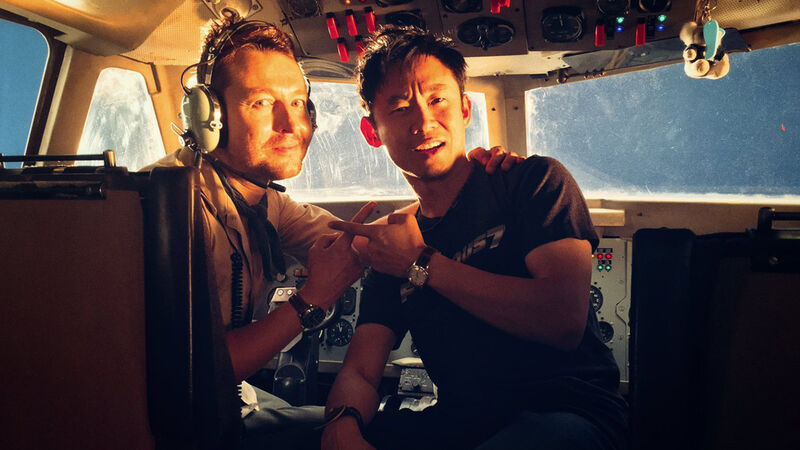 The Story Behind the ‘Aquaman’ Cameo You Might Have Missed

Actor/writer/director Leigh Whannell made a surprise cameo at the end of the most recent Aquaman trailer, playing a pilot who points out that Amber Heard’s Mera — who has just jumped out of a plane — doesn’t have a parachute.

Though the appearance isn’t entirely unexpected as he and director James Wan are old friends who have collaborated on the likes of Saw and Insidious. The only real surprise being that the cameo doesn’t have a horror element. Aside from that lack of parachute.

So while chatting with Whannell about his new movie Upgrade, we also slipped in a few questions about landing the Aquaman role, working with star Jason Momoa, and potentially directing a superhero flick in the future. This is what he had to say…

Leigh Whannell: “It was fun to be on the set. That was why I wanted to do it. James Wan and I have the same manager so she called me up and said, ‘Do you want to fly down to Australia and do a cameo in Aquaman?’ ‘Sure!’ Because I wanted to see that set. I wanted to see a giant comic-book movie set. It was just as impressive as you would expect. I flew to Brisbane and then we went to the Gold Coast where the Warner Brothers’ studio is and I’d just gotten off the plane and they took me straight to the studio to have me outfitted for the costume. Then they drove me around in a little golf cart.

“They took over the entire studio, so four different sound stages were filled up with different sets. I remember walking into one of them and seeing these huge polyurethane statues and the scale of it was pretty impressive. It definitely starts to worm its way into your brain. You see that and you’re like, ‘What would I do if I had this kind of money?’ It’s very intoxicating to be painting with that many colours and to have that much at your disposal.”

Leigh Whannell: “I don’t know. Who knows? It’s not something I’m really aspiring to, like ‘I have to be the guy that makes Plastic Man.’ But I guess when those phone calls come; if you ever get that phone call, ‘Hey. We’ve been watching your work over the last few years and we’d love you to come and do Green Lantern.’ I think the flattery of that would be pretty intoxicating. You could pretend you’re cynical about superhero movies: ‘I don’t want to do any of those!’ Then the phone call comes and you drop all your integrity. ‘I’ll be right over.’ So I don’t know what I would do if I suddenly got a call from Marvel. I’d be very flattered.

“But a lot of the directors I’ve spoken to over the last few years, either they’re lying when they say ‘I always wanted to do Doctor Strange.’ Or they really did — in which case, their life turned out pretty great, because they got to do the movie they wanted to do. But they certainly tell you that. ‘Oh, that’s the one I always wanted.’ I don’t have that. Well, I have a guy, but he’s already been done. The one superhero movie — the one superhero I would have been excited to do [does Batman ears] has been done so many times that even I don’t think I could bring anything new to it.”

Leigh Whannell: “I have to admit that one thing I’ve always been very cynical about is star quality. You hear that a lot in Los Angeles [affects LA accent], ‘He’s just got it.’ And maybe because I was a failed actor, I was always like ‘There’s no such thing as ‘it.’ It’s just people.’ But then I did a scene with Jason Momoa and he slapped me on the arm in the middle of the scene. I think I had one line in the scene that I was supposed to say to him, and he responded, and I remember when he was looking at me in the scene I was like, ‘Ahhh’ [holds heart]. I am now a begrudging believer in — and I feel ill for saying this — but I’m a begrudging believer in star quality. There is such a thing as movie star quality. Some people have ‘it,’ and some people don’t.

“But maybe what people call star quality is just charisma. I’m sure in every group of friends there’s the charismatic one that when you’re at dinner is dominating with stories. The best storyteller of the group. And that’s charisma. Maybe Jason Momoa would have that ‘it’ quality if he was a plumber. All the other plumbers would sit around and go, ‘Oh that Jason, bloody hell he can tell a story.’ Because he’s 6 foot 4 and a giant. Even if he was digging ditches you’d look at him. You’d go, ‘Christ, look at that f**king ditch digger. That’s the biggest ditch digger I’ve ever seen.’ But I think the lens is a weird thing, and I think it likes certain faces. Certain faces just look good on camera. And conversely, there are other people who look fine in real life but can’t take a photo. It’s like the camera just doesn’t like the angles of their face. But I definitely came away from that impressed with Jason Momoa.”

Will Whannell’s ‘Pilot’ Get a Spin-Off?

Leigh Whannell: “I definitely wrote down a backstory. You know how Tolkien filled that bible of the world before he wrote those stories? I had the bible for my character. I wrote it myself. [Laughs] I didn’t. I don’t think I even knew my lines. Because it was James. Five seconds before they were about to roll I was like, ‘S**t, what’s my line again?’ I was just happy to be there.”

As for whether Leigh’s pilot will ever get a celluloid spin-off, Whannell said, “I’m going to go with no. I don’t think so.”

Upgrade hits UK screens on August 31, while Aquaman is out in December.