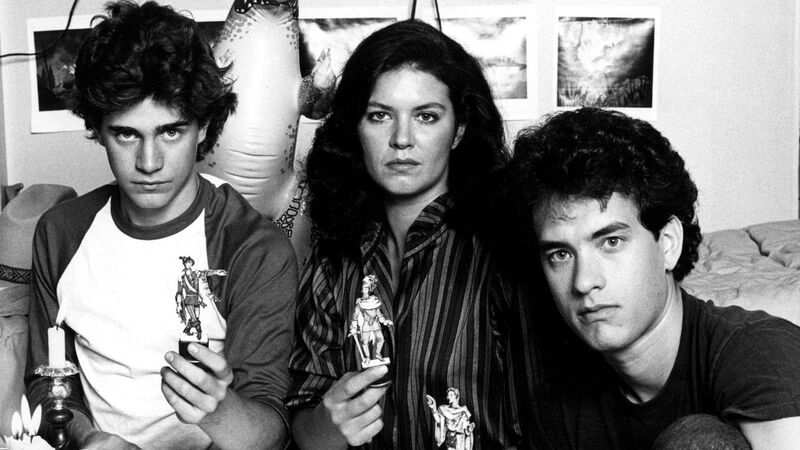 It’s Tom Hanks’ birthday today – July 9 – so to celebrate, we thought we’d examine one of his lesser-known and lesser-seen films in the shape of Mazes and Monsters.

A TV movie that revolved around the Dungeons and Dragons craze that was sweeping through college campuses at the time, Mazes and Monsters screened on December 28, 1982, and was then largely forgotten.

Until, that is, lead actor Tom Hanks became one of the biggest stars on the planet. Then Mazes and Monsters became known as something of an oddity; a film that had controversial origins rooted in real-life, and one that seemed to be for the moral panic that briefly surrounded role-playing games at the time, highlighting the corruptive influence of Dungeons and Dragons, and effectively suggesting that such activities could kill.

So read on for details of the film that featured Tom Hanks’ first lead role – the deeply strange Mazes and Monsters.

What is Mazes and Monsters?

The film kicks off with a group of students returning to Grant University after the summer break. Each with their own set of problems and personal struggles.

Kate (Wendy Crewson) is smart and popular, but reeling from her father walking out on the family. And Daniel (David Wysocki), who yearns to be a games designer, but is under pressure from his parents to become a computer programmer. He’s also really good looking, which in Mazes and Monsters means he gets lots of casual sex, but can’t hold down a relationship. And that’s also a problem, apparently.

The trio escape their real-world issues by playing the Dungeons and Dragons-style role-playing game of the title. But they need another person to make up their foursome.

That’s where Robbie (Tom Hanks) comes in. Robbie’s older brother went missing when he was a kid, while his parents constantly drink and argue. Robbie also got kicked out of his last school, which is why he’s joining Grant.

But he also loves Mazes and Monsters, and even though Robbie promised his parents he’d quit, he agrees to be their fourth, and so the game begins.

It all kicks off innocently enough, with the gang bonding over candle-lit tournaments, and Robbie embarking on a relationship with Kate. But Jay Jay decides to play a game in the real-world, using nearby caverns as a venue. And it’s down there that Robbie has a psychotic episode in which he does battle with a monster called Govril.

From here on in, fantasy and reality mix in his mind, with Robbie believing himself to be a holy man called Pardieu. Claiming that he needs to be pious, humble and celibate to reach the next level, he breaks up with Kate, and then goes missing, the police believing he is hiding in the caves.

But Robbie is in New York City, stumbling around in a bloody, hysterical and delusional state, and believing the World Trade Center to be ‘The Two Towers’ he has been searching for. His friends come to the same conclusion, and make it to the top of the Twin Towers just in time to prevent Robbie from jumping off.

The trauma of the situation results in Jay Jay, Kate and David leaving role-playing games behind to enter into adulthood. But there’s a sting in the tale when they visit Robbie and discover that he still believes Mazes and Monsters to be real, and continues to play the game in his mind. Resulting in what Kate calls “the death of hope, and the loss of our friend.”

Is Mazes and Monsters Based on a True Story?

Yes and no. Mazes and Monsters is based on a book of the same name – by Rona Jaffe – which itself was inspired by the disappearance of Michigan State University student James Dallas Egbert III in 1979.

Egbert disappeared from his dorm in August 1979, and when the police weren’t able to locate him, his parents hired a private investigator called William Dear.

Dear came up with a bunch of theories regarding Egbert’s whereabouts, one of which connected his disappearance to a game of Dungeons and Dragons in the steam tunnels underneath the university.

That wasn’t the case, however. Egbert did indeed enter the tunnels, but to commit suicide. When he was unsuccessful, the troubled teen went on the run, staying in friends’ houses and finally travelling to New Orleans.

Following another failed suicide attempt, Dear tracked him down, but even though he handed Egbert over to his uncle in September 1979, Robert died of a self-inflicted gunshot wound less than a year later.

In spite of the fact that his death was unconnected to Dungeons and Dragons, the press took Dear’s theory as fact, the story spreading far and wide, and kicking off a moral panic that cast a shadow over the role-playing game for years.

Rona Jaffe decided to base a novel on that version of the story, changing the places and names and writing her own ending, but retaining many details, and laying the blame squarely at the door of Dungeons and Dragons.

She rushed the book out in 1981, before Dear got the chance to tell his side of the story in his own tome – The Dungeon Master – in 1984. And it was Jaffe’s somewhat hysterical cautionary tale that was adapted into Mazes and Monsters.

Is Tom Hanks Good in Mazes and Monsters?

Tom Hanks had popped up in the likes of Taxi, Happy Days and The Love Boat at the start of the 1980s, and starred in crossdressing sitcom Bosom Buddies, but Mazes and Monsters was his first leading role in a  feature. And wouldn’t you know it, he’s really pretty good.

Robbie is the most complex character in the movie. Jay Jay is initially set-up as the troubled one, even contemplating suicide early in proceedings. Robbie is much more together, being good at the game, cool at parties, and a charmer with the ladies, all of which Hanks effortlessly pulls off thanks to that natural likability and charisma we’ve all come to know and love.

But then the cracks start to appear. When Robbie is telling Kate about his missing brother, it’s genuinely upsetting (though the nightmare scenes in which Robbie calls out to his bro are a bit clunky). His breakdown in the caves is also pretty effective, though when you see the monster that he claims to be doing battle with, it’s somewhat laughable.

But Hanks nails Robbie’s full-on breakdown in the film’s final third, the actor utterly convincing as a kid in the grips of serious mental health issues. It’s harrowing, heartbreaking stuff.

All-of-which adds up to a pretty powerful performance from the future Oscar-winner. Definitely the best thing in the film.

So while Tom Hanks probably isn’t particularly proud of the movie Mazes and Monsters – which is something of a misguided mess – he should be proud of his work therein; a solid turn that helped kick off one of Hollywood’s most successful careers.