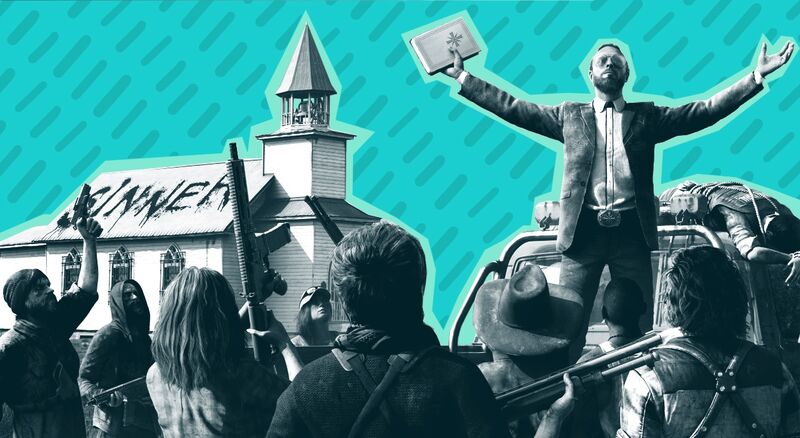 For decades now, audiences have been scaring themselves silly watching films and TV shows about the paranormal. Yet, despite us gleefully seeking out ghosts and demons to scare the crap out of us, once the credits roll, we can leave the cinema or turn off the TV, safe in the knowledge that these otherworldly horrors are resigned to the realm of fiction.

When it comes to stories about cultist groups, however, there’s no such solace to be found.

Viewed through the lens of our comfortable lives, movies like Martha Marcy May Maylene might seem a bit farfetched. Yet, for many people, cults aren’t just an intriguing narrative setup – they’re a horror story that’s all too real.

Few know this better than renowned cult expert Rick Ross — so we spoke to him in order to dig a little deeper into the truth behind the fictional portrayal of cults.

While not quite as famous as the rapper who shares his namesake, Ross has slowly become one of the most respected voices in cultist research nonetheless. Making his name deprogramming brainwashed cult members and fearlessly exposing countless twisted groups on his encyclopedic website, Ross has admirably spent over 30 years attempting to bring Americans back from the brink of lunacy.

Now, he’s helping Ubisoft create the same kind of monsters that he’s spent most of his life fighting.

When first settling on their cultist setting for the upcoming Far Cry 5, Ubisoft’s narrative director Dan Hay was adamant that the game’s story needed to feel authentic.

While many game creators seek real-world experts to help them fact check mid-way through development, Ross reveals that the team wanted his involvement right from the very beginning.

“When I first started [work on Far Cry 5], there was a lot of reality testing going on. The team would ask questions like: ‘Could a group move in on an area in rural America and start to take over a town, a county? Has that happened?’ I would give them historical footnotes and then cite different groups that had done that and how they accomplished that, step by step.”

In Far Cry 5, a period of economic and political uncertainty has allowed a radical Christian cult named the Project at Eden’s Gate to violently overrun a once-quiet state in rural Montana.

Yet, despite this deranged cultist uprising making a brilliant concept for a video game, to me, the sheer scale of Eden Gate’s Montana takeover just seemed too farfetched to be plausible.

It turns out that I couldn’t have been more wrong.

The terrifying reality of cultism

“I can tell you that right now there are towns in the United States that are controlled by groups called cults,” Rick says solemnly.

While he’s reluctant to provide specific names and locations due to ongoing court cases, Ross sheds some light on a few chillingly recent cult uprisings.

“I’ll give you two examples that I can give you. Hilldale, Utah and Colorado City, Arizona. Both are controlled by a group called the FLDS, led by Warren Jeffs who is now serving a very long prison sentence for abusing children.”

Unbelievably, despite its twisted leader being locked behind bars, Ross reveals that the FLDS is still very much a threat.

“Due to the visitation and communication that [Jeffs] is entitled to as a prisoner, he still continues to run a group with more than 10,000 members in multiple states.”

In Far Cry 5, Montana’s fictional cult uprising is led by a tenacious leader of its own – Joseph Seed. Just as charismatic as he is sadistic, Seed convinces his flock that the rapture is upon them and takes over a large portion of Montana so swiftly that the authorities begin to fear him.

“Joseph Seed, to me, is vividly real – and much like cult leaders that I have met. Right now, there is a female leader of a certain group in a state in the US who has such influence that the police are afraid to act, Child Protective Services are afraid to act.

There’s an ongoing criminal prosecution right now taking place, but this particular woman has so much power in this town that the [authorities] are afraid of her.”

Facing the wrath of a cult

As someone who has made a living from exposing these dangerous groups, unsurprisingly, Ross has been unlucky enough to experience their terrifying tactics first hand.

“I’ve been sued, I’ve been harassed, I’ve been stalked by private investigators. One group even arranged to buy my garbage and penetrated my private phone and banking records.”

Unfortunately for Ross, the harassment he faced only got worse over time.

“I was actually under the protection of the United States Justice Department because one group put me on a list of people to be murdered. I’m happy to tell you that I survived all that — and beat five lawsuits filed against me. One group even spent $5 million suing me over a period of ten years and they lost in federal court on all counts.”

While experiencing such sustained and horrific abuse would stop many activists in their tracks, the more that cultist groups attempt to silence Ross, the more confident he feels that he’s doing the right thing.

“Many groups called cults have harassed me, and I take that as an indication that I’m having an effect. They’re lashing out at me because they feel that I’m a threat.”

As you’d expect, this wasn’t a career path that Ross dreamed of from a young age, but one that he fell into after experiencing a cultist group first hand.

“It started when my grandmother was living in a nursing home. Somehow, the paid professional staff was infiltrated by a radical kind of fringe religious group that targeted the elderly in that home.”

Despite appearing like a fairly reputable retirement community on the surface, the home’s staff were quietly attempting to convert its Jewish residents to a Jesus-recognising subsect of Judaism called Messianic Judaism.

Despite many of these elderly residents fleeing persecution in Europe during World War II, the home’s increasingly aggressive missionaries repeatedly told these vulnerable retirees that they would burn in hell for all eternity if they didn’t convert.

“My grandmother was very upset by a confrontation she had, and that led to me being concerned about what was going on there. I worked with the home and got five people fired from the paid professional staff. What I saw there inspired me to become an anti-cult activist.”

Since then, Ross has become somewhat of an expert in deprogramming the brainwashed. Traveling the world, Ross has performed over 500 deprogrammings as a private consultant. And he’s managed to incur the wrath of the world’s most prominent cult along the way — Scientology.

It turns out that Tom Cruise’s favourite church isn’t a big fan of Ross’ work either. With Ross making a name for his deprogramming work, he began to criticise Scientology Detox centres that Cruise himself was setting up – and it didn’t go unnoticed.

Desperate to shut Ross up, the church used its money and influence to take him to court.

“They recruited a young man whose mother retained me to do what was called an involuntary deprogramming back in 1990.”

Interestingly, this case didn’t even revolve around one of their own, but of United Pentecostal Church member named James Scott. With Scott’s mother seeing shocking accounts of manipulation and abuse, she became increasingly concerned about her children’s involvement in this dangerous cult, begging Ross to perform an ‘involuntary deprogramming’ on Scott.

Despite Ross being acquitted of this forcible deprogramming charge by a jury, The Church Of Scientology saw its chance to strike back at Ross.

“I went through a criminal trial on that and was found not guilty, and later Scientology recruited the young man to sue me civilly, and they managed to win. They had a $2million judgment against me, and in 1995 I declared bankruptcy.”

Ironically, Scott eventually saw the error of his ways and quickly turned his back on both the United Pentecostal Church and The Church of Scientology.

“The young man decided to leave the group he was in, which was not Scientology but another group that had been called a cult. He reconciled with his mother and ironically, agreed to settle the multimillion-dollar judgment with me if I would provide him with 200 hours of my consultation time and $5,000 cash to get a new start, which I happily did. Ultimately, Scientology was humiliated by the way things turned out.”

Now The Church of Scientology has moved on from gunning for its least favourite anti-cult activist. Yet, with Ross revealing that plenty of horrific cultist groups still having a stranglehold on rural parts of America and Australia, Ross’ work is far from done.

“These groups have sued me predominantly because of the Cult Education Institute, which is an online database. They wanted to shut down the information and make it impossible for people to find out what they had done.”

It may seem strange then that this anti-cult activist has time to spend doing consulting work for video games, but for Ross, it’s crucial that more people understand just how dangerous a threat cultist groups can be.

“When I saw what had been done with that character [Seed], it just totally resonated with me. Unfortunately [based on my experiences], Joseph Seed is chillingly real to me.”