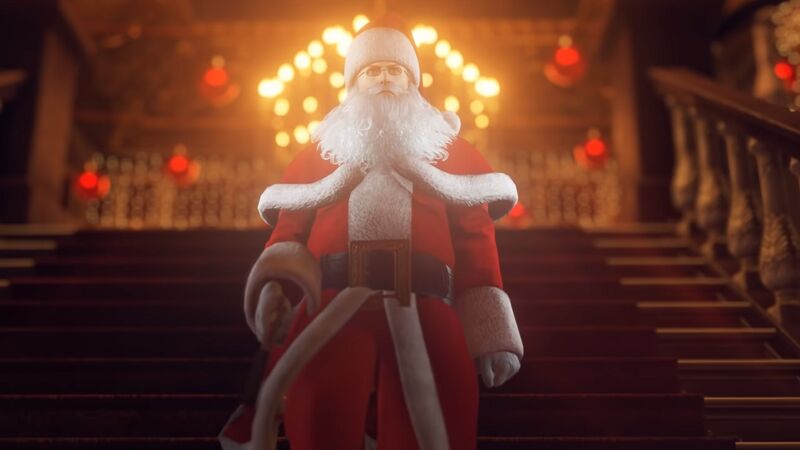 The Twelve Games Of Christmas – Part One

Christmas, to paraphrase the American crooner Barry Manilow, is just around the corner. This means lots of things. Presents. Family. Laughter and good times. But also sitting in your bedroom in your pants playing videogames on your own, because really, the whole thing is a vulgar cashgrab and it’s not even like there’s even a new episode of Doctor Who this year. What there are, though, is loads and loads of Christmas themed videogames. Some are surprisingly good. Some are predictably bad. And this list features examples of all of the above. Why not get stuck into some of these come the big day? It’s better than explaining the rules of Monopoly to your granddad again, surely…

ON THE FIRST DAY OF CHRISTMAS MY CONSOLE GAVE TO ME… SOME FESTIVE LEMMINGS WALKING OFF A CLIFF!

1991’s Lemmings, as well as its subsequent onslaught of sequels, was unquestionably one of the jewels of the Commodore Amiga’s golden age. Programmed by the Scottish pair of Mike Daiily and David Jones (who both share credit for the invention of Grand Theft Auto in 1997), the game gave you just one task; stop as many lemmings, or at least anthropomorphised versions of the legendary life-hating Arctic rodents, from committing suicide. Between 1991 and 1994, publisher Psygnosis released a variety of yuletide-themed Christmas titles. They were great. It’s also harder to feel sad about mass genocide when the victims are wearing Santa hats.

ON THE SECOND DAY OF CHRISTMAS MY CONSOLE GAVE TO ME… A MURDEROUS BALD MAN!

Hitman: Blood Money saw a host of new additions to the murderous repertoire of Agent 47. You could now use an NPC as a human shield. There were some seriously fugly improvised weapons. But best of all was that each mission always included a narrative where you could make an assassination look like it was an accident. Released in 2006, the fourth game in the series had a mission in which 47 was sent to execute one Chad Bingham Jr. by draining his swimming pool over a cliff edge… with Chad and his party guests sat inside. Best of all, you had to do all this dressed as Santa, which kinda confirms some rumours we’ve heard about Saint Nick and his mass grave of reindeer in Lapland. Brick up your chimney. Nobody who is jolly as much as that guy is should be trusted, really they shouldn’t.

ON THE THIRD DAY OF CHRISTMAS MY CONSOLE GAVE TO ME… A WHOLE WEEK OF FESTIVE FUN FOR THE HORDE!

What do Necromancers get at Christmas if they’ve spent the subsequent twelve-months being good boys and ghouls? Well, it doesn’t matter if they’ve been good or not, really, since every year, from the sixteenth of December until the twenty-fifth itself, the land of Azeroth celebrates their own version of Christmas, The Feast Of Winter Veil. Yes, the massively successful fantasy MMO World Of Warcraft even has its own version of Santa Claus, named Greatfather Winter, who gives out festive gifts from beneath the decorated trees of Orgimmar or Ironforge. Don’t like the gift? Like it or lump it. There are no branches of Argos here, let alone anything resembling a returns policy.

ON THE FOURTH DAY OF CHRISTMAS MY CONSOLE GAVE TO ME … A RIDICULOUSLY DRAWN, HYPERSEXUALISED NERDY WITCH!

Platinumgames’ 2012 hack ‘n’ slash adventure Bayonetta 2, starts off with a preposterous freeze-frame crotch shot… but after that, the story picks up with our long-legged heroine doing her Christmas shopping, wherein she’s attacked by a bunch of angels during a stunt plane flyover, which is confusing, because we thought Christmas was a Christian holiday, and obviously Bayonetta is a witch and then there are the angels and we have literally no idea what the stunt plane thing is about… oh, it’s all just so confusing. Good game though. Terrible posture. Wearing high heels all the time will do that to you.

ON THE FIFTH DAY OF CHRISTMAS MY CONSOLE GAVE TO ME… A LOST CLASSIC FROM THE GOLDEN AGE OF THE SEGA SATURN!

If you can wrap your head around the idea of quantum mechanics, objective reality, universal wavefunction and the probable lack of wavefunction collapse (and really, who can’t, especially after a few drinks) then it’s not that hard to imagine there’s a parallel universe out there somewhere where an androgynous, exiled Nightmaren called Nights is the face of SEGA and not a speedy blue hedgehog. Directed by Sonic creator Naoto Ohshima, 1996’s Nights Into Dreams not only riffed on some pretty heavy themes (the game is heavy influenced by the theories of psychoanalysts Carl Jung and Sigmund Freud) but is unquestionably one of the greatest games ever made. A truncated Christmas themed version was released later that year, in a bid to boost sales of the SEGA Saturn, but what we’d really like for Christmas is a new, much overdue outing for the titular character.

ON THE SIXTH DAY OF CHRISTMAS MY CONSOLE GAVE TO ME… A VERY SILLY OPEN WORD GAME ABOUT A GANGSTER WHO BECOMES PRESIDENT OF THE U.S.A, WHICH AT ONE POINT WOULD HAVE SOUNDED CRAZY, BUT Y’KNOW…

The How The Saints Save Christmas DLC for 2013’s extremely bloated, yet brilliantly batshit Saints Row IV not only features naked Santa (because of course), but sees a character dying after being impaled on top of a Christmas tree. There’s another mission that features decapitated reindeer. In another, you have to fight gingerbread men. Now we know what you’re thinking. This all sounds a little bit too much like the FANDOM staff party, right? We couldn’t possibly comment. Saints Row actually has form when it comes to adding Christmas content to their games, releasing the Ho Ho Ho pack for the original game on the Xbox 360 back in 2006. This allowed you to grow a big white beard, and dress as Santa while committing unspeakable crimes. It was a different time, it really was.