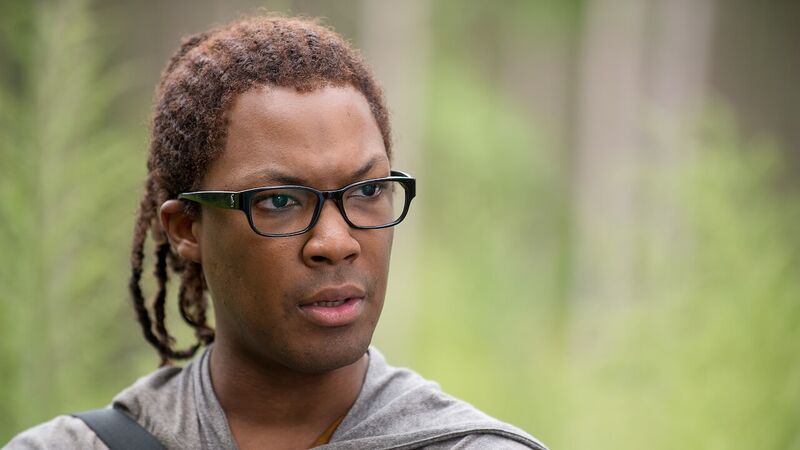 As The Walking Dead Season 8 continues apace, we caught up with series executive producer Greg Nicotero and fired a bunch of fan theories at him. One of which involved Heath reappearing. Heath was last seen getting separated from Tara in a Season 7 flashback sequence. Here’s how he responded:

THEORY: Babies born into the apocalypse are immune.

Nicotero: “Nah. I don’t think so. Because I think if the mothers are affected then by right the babies will be infected. It’s an interesting idea though.”

THEORY: Jadis is Alpha of the Whisperers.

Nicotero: “That’s an interesting theory. I mean I can see exactly why they would think that.”

THEORY: The helicopter is connected to the Fear the Walking Dead crossover.

Can you see it working?

Nicotero: “Oh, I miss Heath. I haven’t thought much about Heath because it’s been a while since he’s been gone. I’d love to see him again! Corey’s a great actor. I’d love to have him back.”

Well, we didn’t see him die, did we? And there is this mystery around it…

Without intending to resolve it?

“Well, there are instances as we’ve proven on The Walking Dead that characters can disappear for a while, and much like Morgan reappear with great flourish.”

Nicotero: “What? Who are these fans? Wow. Huh. I don’t know. Why would Carol kill Morgan? People have had issues, they haven’t killed each other over it. Unless you’re Negan. Yeah, I don’t know about that one. I don’t feel that’s a very valid theory because I don’t feel it’s warranted that he would do something so despicable that Carol would kill him. That’s like saying Carl comes back and eats Rick’s face off. What? I don’t … there is a fan theory that I just heard that you never see Carl shoot himself.”

THEORY: Jesus and Daryl will fall in love.

But the fans want it.

Nicotero: “Yeah, that’s not going to happen. I don’t see it. Sorry, fans.”

Daryl and Jesus shippers may be disappointed, but fans of Heath should keep their eyes open. Perhaps he’ll show up soon, maybe even as a member of the Whisperers, a group of survivors from the comics who were introduced to the story right after the war with Negan ended.