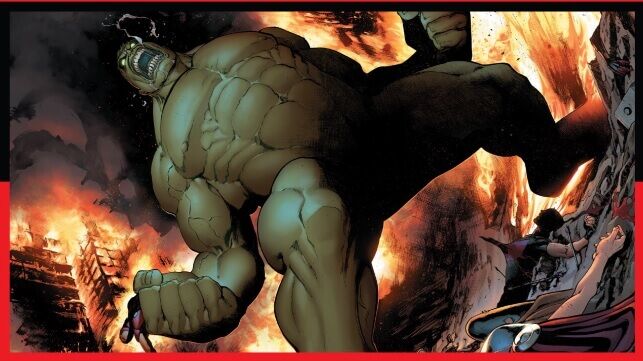 Things the Hulk Won’t Be Remembered For

Ladies and gentlemen, I regret to inform you of the passing of Robert Bruce Banner, who was best known as the Incredible Hulk. Conceived in 1962 by Stan Lee and Jack Kirby, the Hulk was one of the first characters that helped revitalize Marvel Comics. For over 50 years, Banner has been living a tormented shared existence with his alter-ego, the Hulk. However, during this summer’s Civil War II event, Banner has been killed off. I hate to speak ill of the dead, but I’d like to share five moments that the Hulk will not be remembered for.

In Incredible Hulk #182, the Hulk crossed paths with a hobo named Crackajack Jackson, one of the few people who showed the Hulk kindness. On top of teaching the Hulk how to write his name, Crackajack fed him some beans. For a time after that, the Hulk was obsessed with beans. Did he prefer them with molasses? Tomato sauce? We may never know as his untimely passing has left this question unanswered.

The Hulk Once Had a Pet Deer Named Bambi

The Hulk once saved a baby deer from some hunters and kept it as a pet he named Bambi. Taking the pet back to his allies in the Defenders, it became possessed by Chondu the Mystic. Poor Chondu found himself a disembodied brain and used a mind-swapping technique to possess the deer and escape. After clashes with the Ludberdites and the Headmen, Chondu’s mind was returned to his head. What became of Bambi? None knows for sure, as the Hulk abandoned the adorable critter shortly thereafter. It happened in Defenders #31–35.

The Hulk Had a Bad Time at the YMCA

Even a superhero can fall on hard times. As seen in Hulk! #23, all Bruce could afford was a seven-dollar-a-night room at the local YMCA. The poor guy couldn’t catch a break, but at least there was a shower. There’s no way this could get any worse.

He certainly won’t be remembered for this, but the endless debate sparked by this story certainly will.

Everyone knows that whenever Bruce Banner gets angry, he turns into the Hulk. However, from Incredible Hulk #425–437, whenever the Hulk got mad, he turned into a savage Bruce Banner. Turning into a 98-pound weakling whenever you get mad is not exactly a career highlight. This was greatly illustrated that time the Savage Banner tried to stop a grenade with his face.

Following the Onslaught event, many of Earth’s heroes were transferred to a pocket dimension to avoid being killed. There they lived out “reborn” versions of their lives. This was Marvel’s attempt at rebooting their classic heroes to try to compete with Image Comics. This led to heroes having massive muscles, skimpy outfits, and other tropes common with Image Comics’ early superhero books. This also included the Hulk, who spent a lot of his time between Iron Man #1–4 and Avengers #4–6 running around without pants.

That concludes my look back at some of Bruce Banner’s less than memorable moments in comic history. Let’s all have a moment of silence for a fallen hero and try to forget everything I just said. But don’t shed a tear, nobody ever really stays dead in comics. The Hulk will be back whenever Marvel figures it’s profitable to bring him back.