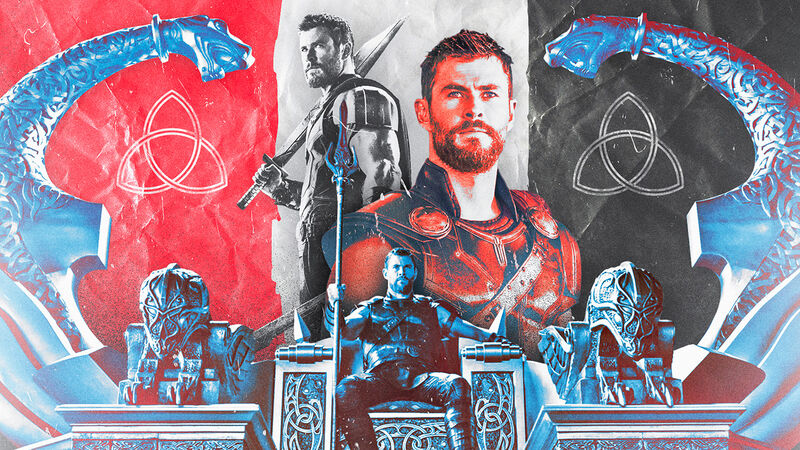 A Day in the Life of Thor

Between being Prince of Asgard, God of Thunder and general hammer-wielding space Viking, how does Thor maintain a healthy work-life balance? How does he manage his time between his royal duties at home and protection of Midgard? How does he get any avenging done? When does he get his cape cleaned? These are all questions you may have asked if you have ever wondered about the daily routine of a crime-fighting Nordic deity.

Well, to shed light(ning) on Thor’s day-to-day deeds, here’s what an average day in his life looks like, stitched together from as much actual fact and data as is possible when dealing with a fictional character based on abstract ideology. Of course, given that a ‘day’ is a unit of time based solely on Earth’s rotation around the sun, and Thor lives in an entirely different realm of the universe, a day for Thor likely consists of a different number than 24 Earth hours.

With that in mind, here’s a window into a day in the life of one Mr Thor Odinson. An average Thor’s Day, if you will.

There’s not much information on whether Thor has a regular morning schedule, but it’s safe to assume that this routine includes a wash of some kind. After all, Thor’s shirtless scene after being taken home from the hospital in Thor (2011) proves that the God of Thunder is familiar with showers beyond the meteor kind. He might even have a coffee too, although as he makes clear in Uncanny Avengers #1, he actually prefers a latte.

Then there’s the matter of getting ready for the day. What Thor lacks in wardrobe choices, he makes up for with his grooming regime. Chris Hemsworth has explained in the past that his long hair as Thor requires him to spend an hour (or more) in make-up and it has been stated separately that, when he wears a wig for the role, it takes an extra 40 minutes, so Thor’s hair has to take him at least 20 minutes to style every morning. Indeed, the video above reveals a substantial amount of styling going on. And he’s worth it.

“This mortal form has grown weak. I require sustenance,” says the recently crash-landed God of Thunder in Thor (2011) before wolfing down an entire box of Pop Tarts and a plate of eggs, and then literally smashing down his finished mug of coffee. This ‘mortal form’ caveat is important because Asgardians don’t actually need food or drink to survive. In fact, in The Black Galaxy Saga (Thor #419-424), Thor went for months in space without a single bite to eat and it didn’t make a difference to his strength or abilities. That said, Thor: Ages Of Thunder (2008) explains that Asgardians “gained their wisdom and youth and vigor and verve” from the Apples Of Idunn, which they feast upon morning, noon and night.

So, depending on whether he is on Asgard or Midgard, breakfast will either be a nice, healthy, golden apple, or some Pop Tarts and eggs, for energy and because they’re delicious.

At least a good 30 minutes is put aside for this activity though because, even though Bifröst travel is relatively instantaneous, Thor and Heimdall often have a natter first, and that is often the cause or result of some other larger obstacle to Thor’s plans. Take Thor: The Mighty Avenger #6, for example, which sees Heimdall – under orders from Odin – preventing Thor from returning to Asgard by threatening TO SEND Jane Foster to a distant unknown planet. This kind of discourse is pretty common between the two and conversations tend to include these phrases: “Stand thee aside, Heimdall”, “Odin has said thou shalt not pass” and “So what’s Jane Foster up to, right now?”

As with any member of any royal family, much of Thor’s day job is mostly made of those duties pertaining to his standing within Asgard. Generally speaking, this can be best summarised as ‘Diplomatic Relations’, but more specifically, this means keeping the peace across all worlds, and more specifically still, this means going into battle and hitting big monsters with a giant hammer.

As Odin explains in Thor: The Dark World (2013), Thor must strive to undo the damage that has been done and “he will bring order to the Nine Realms, and then, yes, he will be king”. Sure, it sounds easy, but it isn’t helped that, throughout the comics, Thor doesn’t just keep the peace but finds himself on all manner of quests too, often at Odin’s behest. Take Thor: Blood Oath (2005), for example, where Thor helps the Warriors Three with their punishment for accidentally killing a giant and they are sent to get several obscure items like the skin of a magic pig. Honestly, it’s a wonder he finds the time for any of it.

Taking in the Sights

A bit of a long shot this one, but writer Walt Simonson’s run on Thor in the mid-1980s included a stint where Asgardians were forced to stay in New York for a short time, only to quite enjoy seeing the sights and shopping in the Big Apple. If Thor ever found time in his day to properly explore city life in Midgard he might want to hit up some tourist spots too. Who knows, he might even find himself wearing an ‘I heart NY’ T-shirt, like the one Volstagg wears in Thor #357.

A quick food fix, which, to reiterate the Asgard/Midgard rule, can either be another golden Apple of Idunn or… ooh, let’s say shawarma?

From his huge wealth of comic-book, film and TV history, one thing about Thor’s life is very clear: his day always involves a big fight or battle of some kind. It might be for the fate of the universe, such as the time he battled with Mangog, powered by a “billion billion beings” in Thor #154-157, or it might be personal, like when he first encountered Beta Ray Bill in Thor #337. It might even be a disagreement with a fellow mythological strongman like Hercules (Thor #126-128), a massive Midgard Serpent (Thor #380), or one of the gajillion times he has confronted Loki. Either way, Odinson always makes sure he gets in his daily dose of shouting and punching.

After a tough bout of world-saving, apples just don’t cut it and, because apparently there is no middle ground in Asgard, only a giant celebratory feast will suffice. Meat of every kind and mead of every measure fill banquet tables for a riotous dinner and loud drunken revelry. Although, for Thor, it often also results in a moment of quiet reflection. A moment to ponder on his relationships, or to dwell on a recent loss, as seen during the first two Thor films, where he leaves a drunken revelry both times to pine for Jane Foster. Basically, he’s the worst kind of person to invite to an actual party.

In Thor: God Of Thunder #20, Thor is shown to take great interest in reading books written by other Gods to learn new information, and there’s no better time to fit this in than right at the end of the day. Especially when it’s reading aloud from to explain to a mere mortal their relationship between their magic and their science.

Listen to a Little Prayer

There’s some uncertainty around whether Thor actually receives power through worship and prayer, as is often the suggestion for religion and deities. In Thor: God Of Thunder #11, it’s certainly suggested that Thor is given an extra power boost through prayer. Either way, it is usually established that he can always hear prayer, and has even responded to those trying to contact him that way before. Given that most followers would pray before their own sleep, night-time must be a constant broadcast of voices for Thor to hear.

When we talk about sleep in the world of Asgard, it’s normally in relation to Odinsleep, a state of rejuvenation that allows the All-Father to recharge the Odinforce, but there have been plenty of times throughout Thor’s history where he has been seen to sleep too. Granted though, most of these have been a result of him getting knocked out, or sedated or, in one instance, tasered by Jane Foster’s intern, Darcy.

Of course, there’s nothing to say that Thor would be going to bed to sleep anyway. Plenty of suggestive comic panels in the past have indicated that when he DOES go to bed, he doesn’t always go alone, but let’s not dwell on that too much. It’s enough to make even the fire giant Surtur blush.