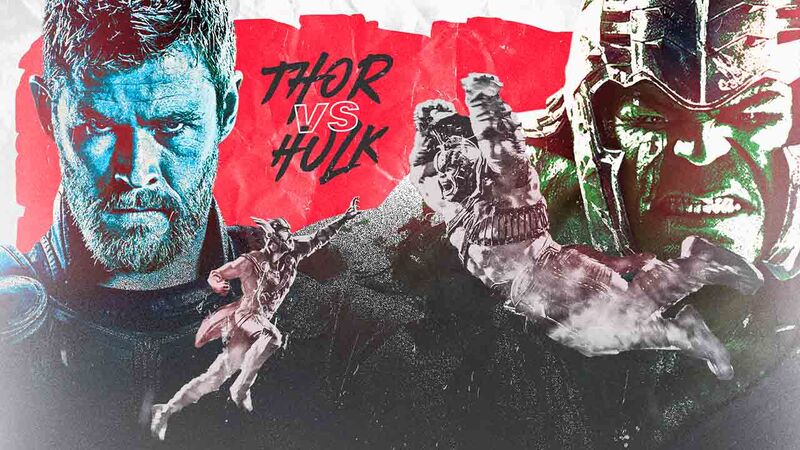 Fight Breakdown: Who Won Between Thor Vs The Hulk in ‘Ragnarok’?

Thor: Ragnarok had no shortage of awesome scenes, but one of the most memorable was a much-needed rematch to decide the mightiest Avenger. Captured and sold by rogue Asgardian bounty hunter Valkyrie, after finding himself stranded on the planet of Sakaar following a tussle with sister Hela within the Bifröst Bridge, Thor is thrown into an arena to fight for the Grandmaster‘s entertainment. The Marvel Cinematic Universe’s two strongest heroes would have to battle it out — for the second time — as Thor was pitted against the Grandmaster’s prized ‘Champion’. Before, of course, Thor could reconnect with his long-lost ‘friend from work’ Hulk and alter ego Bruce Banner to plan their escape.

Ahead of Avengers: Endgame, the final instalment in what Marvel boss Kevin Feige has labelled the ‘Infinity Saga’, let’s take a close look at one of the MCU’s biggest and baddest matches to date. Here’s a breakdown of how that epic fight went down, blow by mighty blow — concluding with who actually emerged victorious.

In the Blue Corner is Thor “Lord of Thunder” Odinson, an Asgardian capable of taking the full energy force of the heart of a dying star — as revealed in Avengers: Infinity War when he assisted Dwarf Eitri in forging new weapon, Stormbreaker. In the Green Corner, meanwhile, we have The Hulk, who famously stopped a Leviathan in its tracks with one punch.

According to Fandom’s Vs Battles community, which is dedicated to quantifying power levels and abilities for the grand purpose of “who would win” arguments, the training Hulk undergoes on Sakaar is significant. While simple-minded, his sessions with Valkyrie are enough to consider post-Sakaar Hulk a different entity entirely — one with no reservations about smashing his one-time friend/colleague, for sure, but also one akin to Dragon Ball’s Goku reaching a new level of Super Saiyan. So, a Hulk that’s even more formidable than before, then.

But it’s Thor’s name in the movie title. Not to be outdone, the God of Thunder has his own transformation to make in Ragnarok.

On paper this is a one-sided fight, as our ‘tale of the tape’ shows:

But if size meant everything, then we wouldn’t be obsessed with the terrifyingly adorable Flerken just introduced into the MCU in Captain Marvel.

Thor is also granted a disproportionate amount of solo screen time, which isn’t insignificant when determining the outcome of this head-to-head. From the moment he enters the arena, there’s a full two minutes and 19 seconds when we’re staring at nothing but sweet, sweet Hemsworth. That’s contrasted with the one minute and one second of CGI Green Guy.

We suspect that’s because it’s quick and easy to communicate Hulk’s usual behaviours: equal parts running and roaring. But also because cinematically, this fight has a purpose — to introduce us to a new Thor.

As the grand showdown in Ragnarok nears, we don’t yet know who Thor will be fighting. He’s trapped on Sakaar, unable to break free from the Obedience Disk the Grandmaster has implanted in his neck, and forced to fight. The Hulk, we learn, has been here fighting for two years, quickly ascending to the title of ‘Champion’ and somehow unable to revert back to his Bruce Banner persona.

Thor entered the arena without his beloved hammer Mjölnir, to find a Hulk who’s enjoyed a two-year ramp-up in strength in addition to the bolstering that basking in the glory of his successes in the ring — not to mention private quarters and a hot tub — inevitably bring. The Hulk powers up as time goes on and his anger increases during the fight, and the crowd’s bloodthirsty chants also have an effect on his aggression.

The Hulk speaks only four words in the whole fight: “No Banner, only Hulk.” Thor realises he can’t reason with The Hulk, and nor can he use the “Sun’s going down” trick to calm him that works so well for Black Widow.

Nonetheless, Thor’s numbers hold steady in the early fight as he trades blows with The Hulk, hitting 93% of his strikes. Thor doesn’t miss Mjölnir, as it turns out, and is able to knock down The Hulk with the Sakaarian weapons just as easily. But over the course of the whole fight, Thor lands just over half as many blows, and gets knocked down more.

The stats are heavily affected by one particular combo from an angered Hulk, who pummels away while Thor daydreams about Odin.

It’s late in the game, but the fight changes from this point. Several consecutive punches from The Hulk enable Thor’s “the-power-was-in-you-all-along” moment. Something that Ragnarok had previously foreshadowed, when the Grandmaster noted the “sparkles” coming from his fingers.

While fighting his other wayward sibling, Hela (mythological families are so dysfunctional), Thor was granted a vision from Odin. The Allfather tells his son that his hammer Mjölnir, now broken, was merely a conduit for Thor’s power — not the source.

Post-awakening, Thor lands just two massive electrically charged blows on The Hulk. The first is perhaps the most interesting, because it launches The Hulk around 150 feet in the air. To do this, Thor would need to be able to generate more than 1.5 million joules of energy with his lightning punch. That’s more than 10,000 times the punching strength of an average human.

This set-up becomes highly relevant when the audience is properly introduced to big bad Thanos in Infinity War, and Thor takes him on, leading the God of Thunder to be vilified by fans for not aiming for the Mad Titan’s head when he strikes his critical blow — something that Thanos taunts him for. Within the Sakaarian arena, all of Thor’s strength and durability still can’t protect him from the Grandmaster’s Obedience Disk.

By most standards of fight scoring, The Hulk would have taken this bout in a unanimous decision. That is, if the fight hadn’t ended prematurely due to tampering by the Grandmaster.

It certainly looked as though Thor was gearing up to win this fight. The Hulk didn’t seem to have an answer to his electric blows, and the Grandmaster’s intervention supports the theory that Thor would have won had the fight continued.

An argument could be made for having more faith in The Hulk. Thor had only scored two electricity-powered blows before the towel was thrown in. That’s hardly giving The Hulk a chance to get angrier and power up further. Given a chance to shake away the stars in his eyes and get furious about what just happened, who knows how strong the Strongest Avenger would get?

When put to the fans, however, there was a clear frontrunner:

Who won the fight?

In terms of the wider Avengers storyline, the fight served its purpose in introducing the audience to Awakened Thor. Whether he won or not, having the power to knock the Green Guy 100 feet in the air is an indicator of Thor’s true strength, and a precursor to us seeing him strike his potentially fatal blow against Thanos with the Stormbreaker.

In a fair world, the Grandmaster’s interference would make this fight invalid. We don’t always agree with the referee, and if we’re to treat this as a real fight, then it doesn’t matter how great your flow is in the 12th round if you lost the first 11.

But as the audience, we know the score. We saw the foul play. It’s pretty clear that Thor had been building up lightning energy for quite some time without his conduit. And being able to channel it for the first time naturally, he was unstoppable. Narrative-wise, it was clear that this was building towards a Thor victory, and the poll above agrees. So we give this one to Thor.