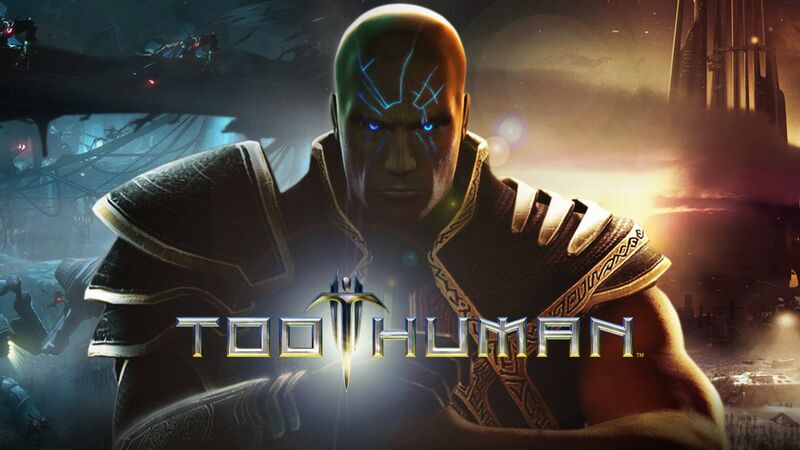 Too Human was supposed to be the Xbox 360’s killer app – the game that pushed Microsoft’s fledgling new-gen console out of adolescence and into adulthood. It was supposed to be brooding, adult, positioned defiantly at the intersection between sci-fi and fantasy, an all-out reinvention of the action RPG for the seventh generation of games.

It was supposed to emerge triumphantly from its decade-long gestation in development hell and stand defiantly against Sony, Bethesda, Ubisoft – even Blizzard! – and make a statement about what Microsoft and the 360 can do.

But everything went wrong. From lawsuits that crippled and eventually closed developer Silicon Knights to delays that cost the game a large portion of its audience, Too Human managed to systematically tick every box in the proverbial ‘How Not To Release a Game’ guide. But to understand how everything fell so spectacularly to pieces, you first have to understand how it all started.

Too Human was originally pitched as a four-disc epic for the PlayStation in 1999, intended to sit alongside other multi-disc behemoths like Final Fantasy VII and VIII . An E3 trailer was released for the project, showing the distant, cyberpunk future of 2450 rather than the alt-history sci-fi Norse mash-up we’d eventually get in 2008.

A year later, Nintendo announced they’d signed an exclusive deal with Silicon Knights, and the target platform shifted to GameCube. As per the company’s contract, Silicon Knights delivered two GameCube games – Eternal Darkness: Sanity’s Requiem and Metal Gear Solid: The Twin Snakes – and Too Human skulked into the background.

Five years later, Too Human re-emerged. It was to be built exclusively with Epic’s cutting-edge Unreal 3 Engine – remember this, because it will be important later. By now, Microsoft was championing the game, and made a massive song and dance about how it’d redefine the action-RPG and it’d do so in time for the 2006 holiday period. That deadline came and went and Too Human – now three platforms later and seven years older – was nowhere to be seen.

A year and a half later, in July 2008, the game’s fortunes started to change: a single-player demo for the game launched on Xbox Live, and despite not showing off the point of the title (it was being marketed as a co-op RPG in the vein of Diablo at this stage), it set the gaming scene on fire. Within months, the demo had been downloaded over a million times, and in its first week on the console, it had clocked more playtime than Grand Theft Auto IV which had launched just over a month prior.

Websites waxed on about the game, magazines printed glowing editorials, message boards erupted. Rumours started to surface that development on the game had been uneasy, and that it was going to ship in a state – even two years later – Silicon Knights and Microsoft was unhappy with. It was the Crackdown 3 of its day – it had already suffered one delay too many, and now something had to give.

Still basking in the afterglow of the demo’s triumphant success, the game finally launched in on August 19 in the States. The reviews were unkind. The game’s Metacritic rating landed on a deflated 65/100, critics mourned the missing features in the game, early adopters balked at the lower-than-average playtime and lengthy, ill-advised death sequences.

There was no four-player co-op, there was no post-game, there was no real depth. The combat – which was supposed to rewrite how RPGs games handled action! – was mapped to the right analogue stick and came off cumbersome and unwieldy. The characters were wooden and stiff. The level design – which had received almost universal praise on the demo’s release – quickly became repetitive and uninspired.

Too Human sold less than 700,000 copies, and plans to complete the original idea of a trilogy were soon shelved. Worse yet, prior to the game’s launch, the studio had filed a lawsuit against Epic Games for breach of contract – apparently, the studio had been creating Too Human on prototype versions of Unreal 3 and this had contributed to the troubled development of the game. As Silicon Knights told it, Epic missed deadlines on giving the studio a working, final version of the engine – and the developer was out for blood.

Things got messy. Epic – perhaps emboldened by the runaway success of Gears of War – refused to back down. It counter-sued Silicon Knights, slapping allegations of copyright infringement, breach of contract and misappropriation of trade secrets on the developer. Epic suggested Silicon Knights had used its tech for a Silicon Knights’ produced title published by Sega, for which it never received a licensing fee. It took five years (heading on into 2012), but Epic won, thanks to ‘overwhelming’ evidence in its favour. And the judgement was brutal.

In 2011, Silicon Knights released the bloated, unloved and entirely forgettable X-Men: Destiny. Another critical and commercial flop, the story goes that Silicon Knights was hamstrung from the start of the game’s development by the ongoing Epic legal battle. A year after the game’s lacklustre launch, the studio was ordered to pay $4.45 million to Epic.

But the most painful punishment came in the form of a product recall. Silicon Knights was ordered to recall and destroy all unsold copies of Too Human, and remove the title from the Xbox Marketplace. It was, effectively, to be erased from the pages of history.. A game that had been a decade in the making, with PlayStation, GameCube and Xbox 360 in its DNA, was scrubbed from the face of the earth. The game is still visible on the Xbox Marketplace, but without an option to download or purchase, it just feels like an awkward memory lingering in the dusty corner of a virtual museum.

Too Human doesn’t get to rest in peace, either. As if the project and everything associated with [bad] enough, eight years after its release some slightly more disturbing tales from the orbit of its development game to light. It was reported that Kenneth McCulloch, credited as content director and narrative lead on the game, had been sentenced and imprisoned for child pornography and sexual assault charges. The timeline of the charges and their historic relevance were never disclosed by the Ontario Court of Justice, but in various reports around the case, his relationship to Silicon Knights was cited often.

It’s another grimy shadow clinging to the legacy of a game that seemed plagued from its conception. Too Human was an unfinished tragedy, a parable of development woe and broken promises.

Between Too Human’s brazen misleading [advertising] and Peter Molyneux’s questionable interview habits, the early life of Microsoft’s Xbox 360 RPG exclusives left a bitter taste in the mouth of gamers. Offset only by Mass Effect and Lost Odyssey, it could be argued the genre never really recovered on the platform, and that Too Human contributed in a very real way to Microsoft’s alienation of the Japanese side of the industry in the 360’s difficult adolescent years.

Too Human was late, over budget, embroiled in legal issues, commercially lukewarm and critically beige. It went from the darling of the gaming industry – from being The Next Big Thing – to being denied even the dignity of legacy sales, scraped from the face of the marketplace. It’s a sad tale, really… one that, in some ways, quietly echoes the Norse tale of hubris and downfall it’s based on.