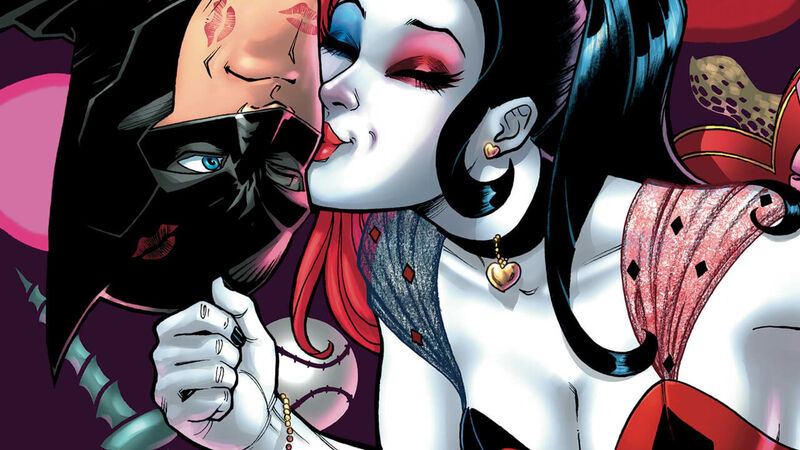 The Top 10 Kisses of the DC Universe

It’s International Kissing Day, and the DC Comics Database put together a list of the top 10 all-time best kisses in DCU history. It was a struggle and there were a lot of heavy contenders. But we know how important it is for all of you to hear a bunch of grown men who spend all day writing about comic books tell you about kissing. If you’re like me spending #IKD all by my lonesome, we’re sure you’ll enjoy this trip down memory lane. Check out these memorable superhero smooches below.

10. Robin and Starfire in New Teen Titans #2 by Marv Wolfman and George Perez

This might not seem like a huge deal now since Dick Grayson has become the DCU’s resident turnstile. Seriously, I’m pretty sure sleeping with him is the requirement to get your own mini-series. But Robin’s kiss with Starfire in the pages of New Teen Titans was hot-stuff, this was before his relationship with Batgirl had really been explored. She immediately explains that frenching is how her people learn a new language, but this was the beginning of a relationship that would last until a horrible demon pregnancy ruined their wedding in the 90’s.

The Legion of Super-Heroes are one of DC’s most tragically under-rated properties. Their continuity is probably the most confusing in comic book history, and I know this because I wrote that stupid article. In ’94 they decided to reboot the Legion during Zero Hour, and the resulting story End of an Era is absolutely heartbreaking. For all their faults, the Legion of Super-Heroes told idealistic stories about how great the future can be if we make it so. While the team is fading away and all reality is erased, they don’t show fear or pity themselves. They hope what remains of the universe will have someone left to fight the good fight, and they reflect on how lucky they are to die with their loved ones. The founders put their hands together to shout “Long live the Legion!” while Lightning Lad and Saturn Girl share one last kiss in their final moment.

8. The Brain and Monsieur Mallah in Doom Patrol #34 by Grant Morrison and Richard Case

Morrison has always been one of DC’s weirdest writers, and his surrealist phase on Doom Patrol makes you actually have to lie down. The aptly named “Brotherhood of Evil” are exactly as much fun as you’d expect a preserved brain and his gun-toting gorilla sidekick to be. When Morrison reintroduces them, he adds the tragic love story that Brain and Monsieur Mallah are lovers who can never be together. Despite the fact that Brain is an evil brain in a jar, Mallah is a super-intelligent gorilla terrorist, and they’re both French, you really find yourself rooting for them. In this crazy world, who are we to say no when somebody else finds love? It’s beautiful and it gives me hope.

The return of Barry Allen as The Flash was inevitable, but still a very difficult move. It’s undeniable that when he died, they killed him off for being incredibly boring. Barry Allen was that rare character who didn’t have some tragedy or personality flaw, he’s just a nice guy who likes helping people. When they brought him back they knew they’d have to establish him as a dynamic character to keep up with Wally West. This is immediately seen when he confronts Iris, his wife who believed him dead. She’s possessed by the unbreakable Anti-Life Equation, and Barry frees her by proving life is worth living with a single kiss.

6. Aquaman and Wonder Woman in JLA #48 by Mark Waid and Bryan Hitch

If you’re not into 90’s Aquaman, check that stuff out. Beginning with The Atlantis Chronicles, Peter David took the under-appreciated hero and made him into a grizzled badass you just wanted to hug. This Aquaman was a lonely guy who couldn’t call the land or sea his home. His one-sided attraction to Wonder Woman was Morrison’s idea, giving the character a reason to stick around with the JLA. She never returned his affections, but when Wonder Woman was put to sleep by the Queen of Fables she could only be awakened by a true prince.

5. Apollo and Midnighter in Midnighter #7 by Brian K. Vaughan and Darick Robertson

Everything about this issue is amazing, it’s a must-have. Midnighter’s ability is seeing everything several steps ahead, and Vaughan gives us a look into his mind by showing the pages in reverse order. Apollo and Midnighter have a mind-blowing kiss overlooking Earth, before we go backwards through several pages of fighting cyborgs. The cyborgs react with disgust to his opening line: “I’ve settled on the finale that leaves your sick operation toppling like a house of cards… and me making love to my husband.”

Batman and Wonder Woman have always been a dark horse pairing, but their relationship is fun when it’s explored. There was a stint in Joe Kelly’s JLA where they tried dating, after sharing a pre-battle kiss right before they died in Obsidian Age. “Perchance” is a beautiful story that deals with the possibilities of this relationship, although they decide that neither of them really has time to date someone. During Blackest Night, Diana was turned into a Black Lantern and the only thing that could snap her out of it was the memory of her love for Bruce. Aphrodite used him as an illusion, allowing Wonder Woman to break free and use the strength of her love to join the Star Sapphire Corps. This was a really cool plot-point that immediately went on to be explored by nobody.

This wasn’t the first time DC has experimented with Superman and Wonder Woman falling in love. It certainly won’t be the last. They’re an obvious power couple, but because of Lois Lane this is usually Elseworlds territory. One of the most interesting choices they’ve made with The New 52 is putting them together for real, to explore the consequences of the most powerful duo in the world getting it on. It’s true that they’re not the most compatible people, but they’re in a unique position to understand each other as nobody else can.

2. Batman and Catwoman in Batman #610 by Jeph Loeb and Jim Lee

The prospect of having Batman in a relationship at all has always been controversial. People usually cite that he’d never have time for a wife, and couldn’t risk having loved ones for his enemies to hurt. The nice thing about Batman comics in the last decade is we’re finally getting away from that all-dark-loner-all-the-time attitude. There’s this huge belief that Batman is only interesting when he’s a sad fucked-up dude. But the serene warrior and loving father figure made popular by Grant Morrison is proving to have every bit as much story potential. When Jeph Loeb had Batman finally get with Catwoman after decades of flirtation, we knew it would have to end but it’s just nice to see him happy for once.

1. Superman and Lois Lane in All-Star Superman #3 by Grant Morrison and Frank Quitely

Superman and Lois Lane are the first relationship of the DCU. They are the President and First Lady. What makes them such a great story is they’re the perfect juxtaposition of super and human. It would be easy to pair Superman with another supe like Wonder Woman or Maxima. But his relationship with Lois emphasizes the humanity of Clark Kent. Superman is a story about the most fantastic man on Earth, but he’s never above humanity. He’s a hard-working American who’s able to do incredible things, and wants to share that greatness with everyone. This is epitomized by Quitely’s drawing of Superman and Lois together on the moon, standing as equals while he shows her the wonders of the universe from his eyes.

For more information on the greatest couples of the DC Universe, check out the DC Comics Database.