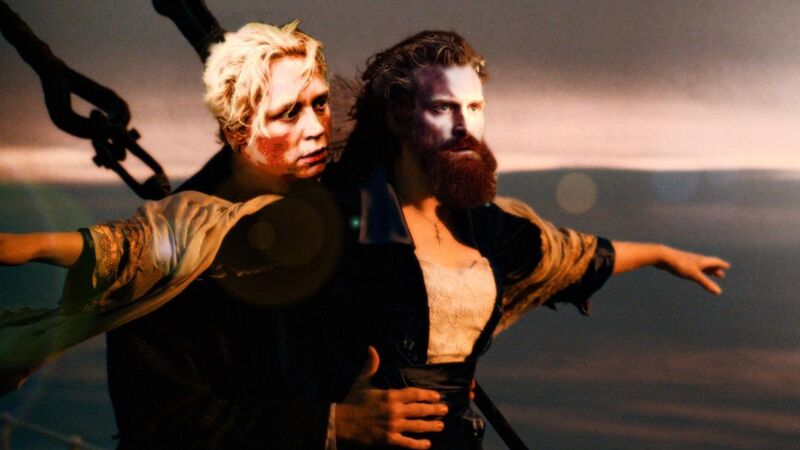 Tormund & Brienne: An Epic ‘Game of Thrones’ Love Story We 100% Want to See

Fans of Game of Thrones have begun shipping what may be the most unexpected duo: Tormund Giantsbane and Brienne of Tarth and we are loving it.

In Season 6, Episode 4, “Book of the Stranger“, as Jon Snow was preparing to depart Castle Black, we finally got the Stark family reunion we had been waiting for since the first season (Though now that we have it, do we actually want it? But I’ll save you from my Sansa-better-not-betray-Jon speech this time).

Though perhaps the most important thing that reunion brought us was our new favorite Game of Thrones ship: Briemund.

The look on Tormund’s face as he watches Brienne ride into Castle Black is fanfiction worthy. (No really, there’s a ton of Briemund fanfiction out there! There’s also amazing fan-art out there too.)

But that look was only the beginning. Since then, we’ve watched Tormund’s very adorable attempt to seduce Brienne.

Not surprising though, Brienne is not falling for any of his tactics.

No really, she’s not falling for any of them. Yet he keeps trying. Maybe she’ll find his persistence endearing? (A girl can dream, right?)

Where we are now:

In last week’s season premiere, we got a little moment between the two to break up the tension.

Tormund watched as Brienne practiced fighting with her squire, Podrick Payne, and couldn’t help but to take the opportunity to express his devotion to her, just as he had last season, without subtlety.

Then last week at Comic-Con, when asked about her thoughts on the Tormund/Brienne romance, actress Gwendoline Christie gave the most bad-ass response.

“What I love about Brienne of Tarth is I don’t think that at the foremost of her consciousness is a value system that’s based on how men appreciate her. But, who doesn’t like being appreciated as both [a woman and a warrior]?”

Then when asked about what Tormund would have to do to win over Brienne, she answered,

“Really, to win Brienne’s heart, it’s all about mutual respect. It isn’t about any sort of overpowering or sexual advance. It has to be about a mutual respect that’s born out of skill and an ability about your ideas.”

So it seems Tormund is going to have to step up his game if he plans on winning Brienne’s heart anytime soon – or before either of them are killed off the show if we’re being completely honest with ourselves.

Why we love it:

The reason why Tormund and Brienne seem like the perfect pairing is that they’re both so badass and independent. Imagine what a power couple they could be if they joined forces! The look Tormund gave Brienne when he first saw her sums it up. They’ve both met their matches, whether Brienne would ever admit it or not.

And although Tormund seems to be strictly seducing her for now, there’s obviously a level of respect for her as a warrior and as a woman.

On top of that all, it’s great to see a woman like Brienne, who breaks the norms of what it means to be a female and makes us all rethink femininity, being appreciated for how resilient and beautiful she is.