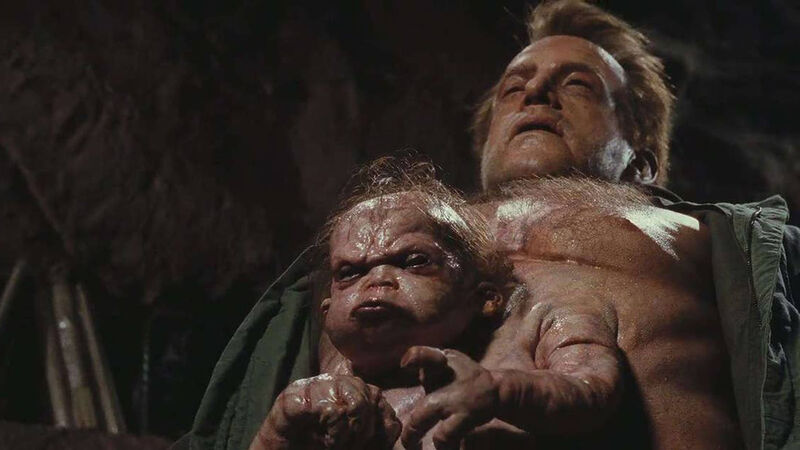 ‘Total Recall’ at 30: What it Was Like to Become Kuato

Total Recall reached its 30th anniversary this year and fans of the sci-fi classic can also celebrate it receiving its first-ever 4K release as part of a new 3-Disco combo out this week, with director Paul Verhoeven supervising the film’s 4K scan from the original 35mm negative.

Based on the short story “We Can Remember It for You Wholesale” by Philip K. Dick, Total Recall has a ton of memorable moments, as Arnold Schwarzenegger’s Douglas Quaid (or IS he?) goes on his trip to Mars. However, one of the most iconic moments is when Quaid meets Kuato, the leader of a rebellion force. As Quaid (and the audience) learns, Kuato is one of Mars’ mutants, a psychic who is conjoined to his brother, George, appearing as a small, mishappen creature growing out of George’s stomach. Kuato’s screen time in Total Recall is fairly brief, but he makes a big impression – so much so that he inspired a Saturday Night Live sketch many years after the film came out.

Playing George – and voicing Kuato as well – was character actor Marshall Bell, known for his work in everything from A Nightmare on Elm Street 2 to Stand By Me to Twins – the latter of which would end up being the first of two films with Schwarzenegger.

Bell spoke to Fandom about what it was like making Total Recall with Schwarzenegger and Verhoeven, the latter of whom he would re-team with seven years later for Starship Troopers.

Looking back on Total Recall, it’s a wonderfully weird movie, combining elements of an amnesia story with a spy story, on top of the Mars setting, the planet’s mutant populace, and more.

So did Bell have an idea of just how wild this movie would be in its entirety going into it? Said the actor, “Absolutely not. That’s the honest truth. I would love to be able to tell you I had it all in my head. I had no idea! I had to live the movie to be in it.”

In order to get set to play George and Kuato, Bell needed to have extensive lifecasts of his head and body made by acclaimed special effect make-up creator Rob Bottin (The Thing, RoboCop, Se7en). Or as he put it, “I had to go to Bottin’s torture chamber and have them sink me into all kinds various goods all day. And that was fun, because working with somebody like that is just a treat because I think he’s the kind of Leonardo da Vinci of prosthetics and that was a [full] day’s work.”

GET YOUR ASS TO MARS

Bell shot most of his material as George, pre-Kuato reveal, first, but said when it came time to film the Kuato material, “I just was so nervous and I didn’t get any sleep. And they came to get me at 3:30 in the morning and then I’m in the up there [with the prosthetics] for nine hours”

Bell noted that by filming in Mexico back then, they were able to avoid the usual mandate for a designated amount of time after one shooting day ends before the next one can begin that typically occurs on a film production. He observed, “SAG wouldn’t let us do that now. But back then, we didn’t have any kind of restrictions on us.”

He recalled that after a grueling week of shooting the Kuato material, he had what he called his “baby incident,” where he lashed out in frustration on set, “because by the end of the week, I had like one hour of sleep and so I was gone. By the time I was Kuato, I was gaga.” Bell noted the apparatus for the Kuato prosthetics “weighed about eighty-five pounds and I had to cut a hole in it so I could pee. It was just a long, interesting, unforgettable process.”

Seeing what Kuato actually looked like, “I couldn’t get over that, and it was a puppet, there were wires attached to it and everything. So you had puppeteers in front of you. And it was just fascinating.”

Many of Bell’s characters tend to be pretty hostile if not downright unlikeable, but George himself stands out as a fairly normal guy, in terms of how he interacts with others. Bell joked that George is, “Very, very normal, except his brother lives in his stomach. He’s probably like, ‘Yeah, I just don’t have the energy to be an asshole here.’ So he’s normal, but here comes Kuato. And he lives in George.”

Bell in fact didn’t just play George and wear the Kuato prosthetic, he voiced Kuato as well, but noted that initially, “That wasn’t a done deal.”

After the film wrapped production, Bell was asked to come meet with Verhoeven and record some additional dialogue, “and I didn’t realize I was auditioning [to voice Kuato], because Paul just gets you to come in and work and doesn’t tell you what he’s up to sometimes and which I love, by the way. But because he surprises people all the time anyway, I think I was auditioning for it when I did that. And then they used me [in the final film].”

Bell first met Verhoeven auditioning for RoboCop and said the director instantly made an impression.

“It was something striking and I was taken with him from the minute I saw him. And then to work with him, you know, that’s pretty intimate, and then working with that [Kuato appliance] on and me whining occasionally and then being reprimanded in front of everybody for whining and everything and having to cope with that…”

Bell said that he always felt Verhoeven was fair with him, even at the director’s most intense moments, remarking, “There’s not an unkind bone in his body. He’s a very kind person, but he’s energetic.”

PUMPING IRON WITH THE TERMINATOR

Bell also had nothing but praise for Total Recall’s famous star, saying, of Schwarzenegger, “He’s got a big heart and he’s a problem solver.”

While making Total Recall, Bell recalled Schwarzenegger had “huge semis full of gym equipment and his own gym set up. Everybody that was on the cast got to go over there and have a huge gym to work out in, during lunch or whatever.”

Bell laughed, recalling the time Schwarzenegger came over to him in the Total Recall gym and gave him some advice on how to best do a curl, saying, “I’m sitting there and I’m getting trained by Arnold during the lunch break! And then you go into the trailer and have a Sachertorte [cake] that he had flown in from Vienna.”

Bell described Schwarzenegger as “A consummate total pro. And a very good actor.”

Bell would work with Verhoeven again in 1997’s Starship Troopers, playing the cowardly and utterly panicked General Owen, whose behavior is so off-putting to the main characters, that one of them – Jake Busey’s Ace – can’t help but grin when Owen is taken out by an alien Hopper Bug.

Recalling working on that film, Bell noted, “I drove down at the last minute. They called me down to the set. They shot it in Casper and I had to drive down in the snow. And I was driving about 95 miles an hour but I arrived on time, really happy. And I have to go out there and then I get squashed by the grasshopper, right? So Paul’s behind the camera and I’m going way over the top before I’m going to die.”

Bell said Verhoeven seemed very pleased with his heightened performance, recalling the director saying, “I like this. You’re terrified! You’re so terrified. You’re a horrible, terrified coward. And you don’t even see the grasshopper!’

Bell said he then couldn’t resist turning to Verhoeven and exclaiming, “I’m not terrified of the grasshopper, Paul. I’m terrified of you!”

Added Bell, “There were 100 people all standing around in the amphitheater and they all clap. And Paul said, ‘I like that. I like that!’”