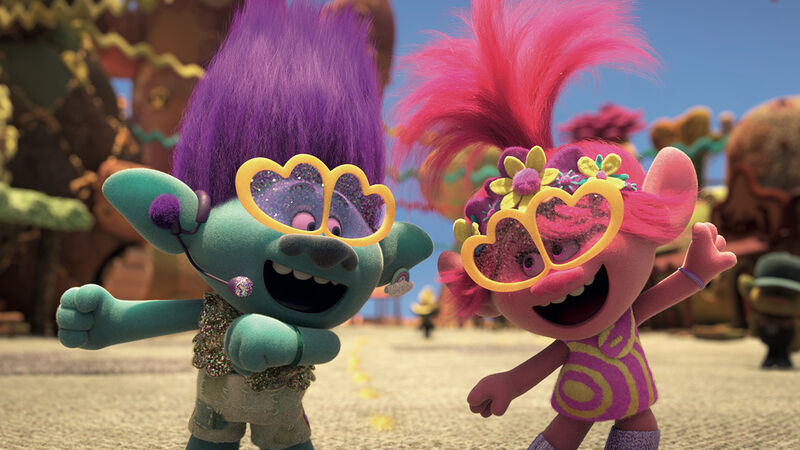 SPOILER WARNING: The following article contains SPOILERS for Trolls World Tour. Proceed at your own risk.

When the first Trolls film came out in 2016, it set about building a universe for a toy that had been popular with kids since first hitting shelves in 1959. The small figurines were known for long hair that stood upwards in a shock of frizzy colour. That was about the extent of their backstory, though cartoons, video games and even an appearance in Toy Story did their bit to fill in some details.

When Dreamworks bought the rights to the brand in 2013, however, they wrote their own magical Troll lore that’s ripe for exploring as the franchise takes off. A TV series and made-for-TV short followed the film’s release, and with its big-budget sequel, Trolls World Tour, premiering this week, we’re diving into both movies to explore the rules, traditions and customs that make the Troll world go round.

The first film tells us that the world of the Trolls we meet was basically a tree in a forest, where they lived happily until a predatory species known as Bergens started munching on them for pleasure. Seeing them as their route to happiness, the Bergens would hold an annual celebration, known as Trollstice, that revolved around the Trolls becoming the main course of a big feast. They would gather around the Troll Tree in order to ‘taste happiness’.

Bergens had many recipes that used Troll as a main ingredient, including Jellied Cassetroll, Fruity Troll Roll, Beef Trollganoff, Troll Slaw, Spicy Tuna Troll and Fillet of Troll. Trolls definitely taste good – when a young Troll licks his own arm, he realizes he tastes “delicious”.

Basically, at the start of the film, they are living their lives in the knowledge that they are prey. “Face it,” says sad Troll, Branch. “Sometimes people go into other people’s mouths and they don’t come out.”

The defining characteristic of the Trolls we meet in the first film — those that we come to know in World Tour as the Pop Trolls — is their sunny disposition. Their existence is based around three principles: dancing, singing, and hugging. It’s these things that feed their own happiness. According to the Bergen chef, er, Chef, Trolls taste better when they’re calm, and at ease.

So important is hugging to Pop Troll culture, that, according to the first film, they set aside time to hug every hour, with a flower on their wrist flashing and chiming to remind them all to get their cuddle on. One child Troll tells Princess Poppy: “I wish it was every half hour,” to which Poppy replies: “So do I, but that wouldn’t leave much time for singing and dancing, now, would it?” At the end of the first film, when Princess Poppy is crowned Queen, she decrees that hug time is now all the time.

Troll society is monarchical. Each tribe we meet has its own king or queen. Among the Pop Trolls, beyond the King and Princess, there are no clearly defined roles for other citizens. King Peppy, and later, Queen Poppy, leads by example.

Peppy won’t expect any Troll to do anything he wouldn’t be prepared to do himself. He’s even willing to sacrifice his own life to save others (if it comes to it). He’s heroic and admired. He lives by the adage: ‘No Troll left behind.’ Pop Troll society functions a little like a commune, where everyone mucks in, and that looks to be reflected among the other tribes.

After the Pop Trolls escape the Troll Tree and the horror of living from year to year in fear for their lives, they set up a new life in a village they build elsewhere. It has everything they need – fresh air, clean water, and sweet acoustics, three elements prized by all Trolls.

We meet Poppy and the Pop Trolls again, 20 years after having set up a thriving community that revolves around celebrating birthdays, weddings, slumber parties, and other occasions. They also mark deaths with funerals. Princess Poppy plans a big celebration to mark the 20th anniversary of their escape, and the opportunity it brought for every Troll to be “happy and live in perfect harmony.”

It’s important to Trolls that they document and remember their history – and Princess Poppy takes it on herself to teach the young Trolls about the past. She’s honest with the little ones that the Bergens would still eat them given half a chance, “but just because it’s the only way they’ll be happy.” That is, until Poppy is able to teach them to be happy in other ways. In the sequel, we learn that Poppy’s father hasn’t been completely honest about their prior history.

The Troll universe is bigger than their community alone, with six different tribes spread throughout the kingdom. King Peppy reveals that one day, when once there was silence, someone made a sound. The sound inspired music, and led to the creation of the Six Strings, with the power to control all music. But as Trolls grew intolerant of the music genres they didn’t dig, the Troll elders separated the tribes, sending each off with a String to live in isolation.

World Tour later reveals that the Pop Trolls had once tried to claim all the Strings with the intention of taking over the Troll kingdom, spreading pop music everywhere. Precisely what Hard Rock Troll Queen Barb is trying to do now with her own beloved genre.

The six main Troll tribes include Techno, who live under the water and have aquatic bodies; the Classical Music Trolls from Symphonyville; the Country Music Trolls who live in the Lonesome Flats; as well as Funk, Hard Rock and Pop factions.

Each String held by the respective tribes has magical properties and is sacred to its people. The Pop Music String is kept concealed behind a shimmery curtain within a harp-type instrument, and when plucked, sends a heart of pink lights into the air that gradually dissipates. United, the Six Strings have immense power. When Barb succeeds in stringing her guitar with all six, she plays the Ultimate Power Chord, which has the power to turn all Trolls in the vicinity into Rock Zombies.

However, once the guitar is smashed, the Strings disappear, draining all the colour, music — and division — from the land. It’s actually a chance to start again, though, and they discover, from the ensuing silence, that music comes from within as one Troll’s heartbeat begins to set a new rhythm for all the tribes to groove to.

The Most Important Songs in the History of Music

On meeting the downcast Country Music Trolls, Poppy attempts to cheer them up by pulling out all the stops. She rallies her companions to lift her country counterparts with a rousing medley of “the most important songs in the history of music”. According to the Pop Trolls, these are: “Wannabe” by the Spice Girls, the Baha Men’s “Who Let the Dogs Out, “Good Vibrations” by Marky Mark and the Funky Bunch, Psy’s “Gangnam Style” and “Party Rock Anthem” by LMFAO.

It is not clear what the other tribes’ most important songs are, or if they even consider it necessary to have them or keep them documented. But the Country Music Trolls definitely hate the Pop Trolls’ song choices.

Not unlike Medusa of Marvel’s Inhumans, Trolls have strong, prehensile hair. Not only can it lift heavy weights – one Troll is inspired to lift a barbell to great heights simply because of Princess Poppy’s confidence in him – but it can also grow at will.

Troll hair can even be transformed to perform the duties of legs, allowing Trolls to walk, and dance, upside down. It’s very helpful for getting them out of any scrapes they get into, and can additionally be turned into a propeller or parachute as needed.

When Guy Diamond – a Troll made entirely of glitter — breaks wind, he releases a puff of glitter. When Cooper, the four-legged giraffe-like Troll, is scared, he poops cupcakes. We don’t know if said cupcakes are edible, and we don’t know what other things may come out of Troll behinds, but on this evidence it’s safe to assume that all Trolls emit nice, rather than nasty, things from their orifices.

And if you ever wondered how they reproduce, Guy Diamond provides the answer in World Tour, when we see him ‘give birth’ to Tiny Diamond, a fully articulate miniature glitter Troll who emerges from his father’s hair.

In the Trolls universe, a Pinky Promise is a bit more than a standard pinky swear. It’s binding and contains very powerful magic. Once a Pinky Promise is made, all Trolls, at least for some considerable distance, become aware that the deal has been struck. They all feel its reverberations.

In World Tour, Poppy makes a Pinky Promise to protect Biggie no matter what. It’s a big deal when he accuses her of breaking that promise.

When Trolls lose themselves, the colour drains out of their world. We see this first in Branch in the first film, who is grey and sad from the start. Later, we see Poppy lose hope and grow sad, the colour draining out of her as she realizes “the world isn’t all cupcakes and rainbows.” Her sadness is infectious, and the rest of the Trolls lose their colour. But as Branch finds something within himself to sing, Poppy’s colour returns and we see him gain colour for the first time. Through their singing and dancing, they bring colour to their environment, including injecting new life into their former home, the dead Troll Tree.

In World Tour, once all music is destroyed, the entire kingdom is drained of colour. But as they all gradually find their own music within themselves, and they are uplifted by acknowledging and accepting their differences, colour returns, brighter and bolder than ever.