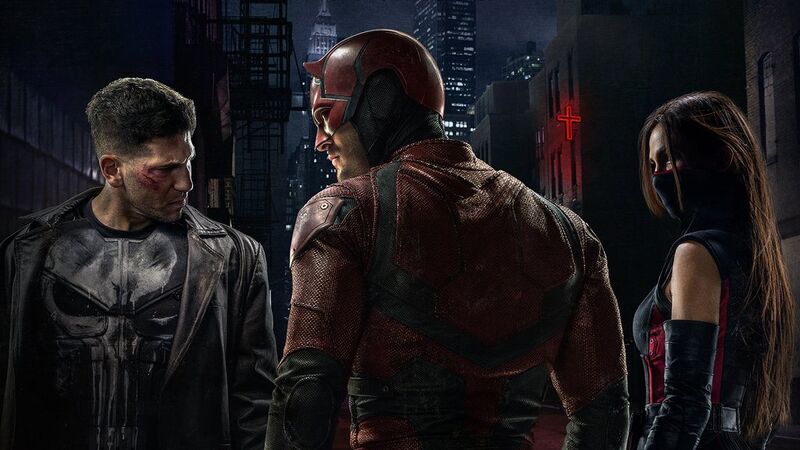 Everybody is pumped about Daredevil coming back to Netflix right now. Season 2 is available as of today, and if you’re anything like me you’re gonna be holed up all weekend bingeing it. I like to put together themed menus when I’m excited about a new release, especially if I want to throw a party or have friends over. Here are some suggestions I have in case you want to make your Daredevil viewing party a special occasion!

My first one isn’t in the show, it’s from the comics, but I have a soapbox right now and this is important to me. We all know that Matt Murdock uses his superhuman sight, hearing, and sense of touch, to help him fight crime. Daredevil’s first appearance in the 1964 comic Daredevil #1 mentions another superpower that we never hear about. Apparently Daredevil also has super taste powers, and he can tell how many grains of salt are on a pretzel just by putting it in his mouth! Why does this not come up more often!? If I had that power, screw 360° vision, that is all I would ever talk about. I just want like an entire miniseries devoted to Daredevil solving restaurant/bakery-themed crimes.

Anyway, now you have a chance to be like Daredevil! In the safety of your own home! Try making a delicious soft pretzel and seeing if you can tell how many grains of salt are on it. For bonus points, make them in the shape of the logo on Daredevil’s chest.

The first season is loaded with allusions to specific foods, and any one of them would make a tasty themed meal. Foggy Nelson tries to cheer Karen Page up by staying out with her all night drunk, so they can visit the fish market first thing in the morning. He tells her “You haven’t lived until you’ve argued with a 90-year-old Okinawa survivor about sturgeon meat.” Foggy also repeatedly talks about how his mother wanted him to be a butcher. “I could be carving my own corned beef. Making my own pickles, having a little shop of my own.” Wilson Fisk and Vanessa Marianna connect over their mutual love for Italian food. On their first real date, Foggy and Karen eat authentic Guatemalan food prepared by Elena Cardenas.

Guacamole would be another excellent choice, because avocados are very important to the history of Nelson and Murdock. When Foggy asks Matt how to say “lawyers” in Spanish, Matt tells him “abogados.” Foggy promptly announces that someday they will be “El Grande Avocados.” That’s the kind of avocados you want in your guacamole. Shout it so the whole campus can hear you, “we’re gonna be the best damn avocados this city’s ever seen!”

Whenever we see Wilson Fisk at home he is making the same thing for breakfast. A simple French omelette with two eggs and a little milk, sprinkled with fresh chives, and a piece of baguette on the side. It appears to be a simple ritual that helps him start his day right. If you really want the authentic Kingpin experience, crack your eggs by placing them in the doorframe of a car and repeatedly slamming the door until they can no longer embarrass you in front of your girlfriend.

The most prominent dessert on the show is, of course, the Zuppa Inglese that Wilson Fisk loves so much. It’s shown to be his favorite childhood dessert, and he later introduces it to Vanessa. The sugary carbs will give you the energy you need to build your own criminal empire, or at least kill your dad with a hammer.

You could also go with the vanilla ice cream that Stick uses to teach young Matt Murdock about his powers. Make sure to really savor the flavors, and try to figure out where the dirty hand of the man who scooped it for you has been.

This season hasn’t come out as of the time of this writing, so I wrote options that are inspired by the characters rather than directly taken from the show.

I’m going to be honest with you; pretty much this entire article is based around this one pun. Every time I hear the name “Elektra Natchios” I want to eat nachos, and that is why I am here today. What would make nachos “Elektra” though? Greek ingredients! You can make delicious pita nachos with feta cheese, fresh tomato, olives, tzatziki, and anything else you feel like. There’s a recipe I like here that also includes ingredients for a Greek-seasoned ground lamb if you’re feeling ambitious. They’re so tasty, you’ll want to repeatedly bring them back against their creator’s wishes! For extra authenticity, you can skewer the pita chips with toothpicks and hold them up dead in front of the man who loves them.

This is more of a presentation idea than an actual food suggestion. Have you ever wanted to feel like Frank Castle the moment his war on crime began? Boy, have I got a fun idea for you! Everybody knows that Frank Castle became the Punisher after his family was gunned down by mobsters while they were having a nice day in the park. Take any normal picnic basket, fill it with whatever ingredients you want, and cover your food in a light drizzle of Sriracha (you can also go with ketchup if you’re not big on spicy food). Haha, woah, what’s that stuck in your teeth? Is that a chunk of your wife’s brains that got in there while your mouth was wide open in horror? You’ll never know!

There’s a lot of alcohol on Daredevil. Young Matt Murdock is given his first sip of scotch whiskey when his dad wants him to sew up an injury without his hands shaking; that appears to be the drink of choice for Battlin’ Jack Murdock. Young Wilson Fisk is forcedby his dad to drink something brown from a bottle. Karen and Foggy get trashed on some kind of liquor that has an eel in it, which this Reddit thread thinks is pálinka (although they might just be referencing the worm inside a bottle of Mezcal). Wilson Fisk and Vanessa drink red wines recommended by Wesley.

Of course, there is a cocktail called the Daredevil. This is typically made with 151 proof rum, a little dark rum, orange juice, cranberry juice, pineapple juice, and a splash of lemon-lime soda or lemonade on top. I’m not sure why it has that name, but I can guess that the 151 proof rum has made plenty of people blind. You might also want to try the “Drink Without Fear” shown on Secrets of the Booze.

You knew they were coming. I do these articles mostly as an excuse to write terrible puns, so here’s everything that didn’t make it to a full entry. They will not amuse people. They will make people groan in agony and horror… and when you are done… people will truly know what it means to be in Hell’s Kitchen.

Thanks for reading! For more information on Marvel’s Daredevil, check out the Marvel Database on Wikia!