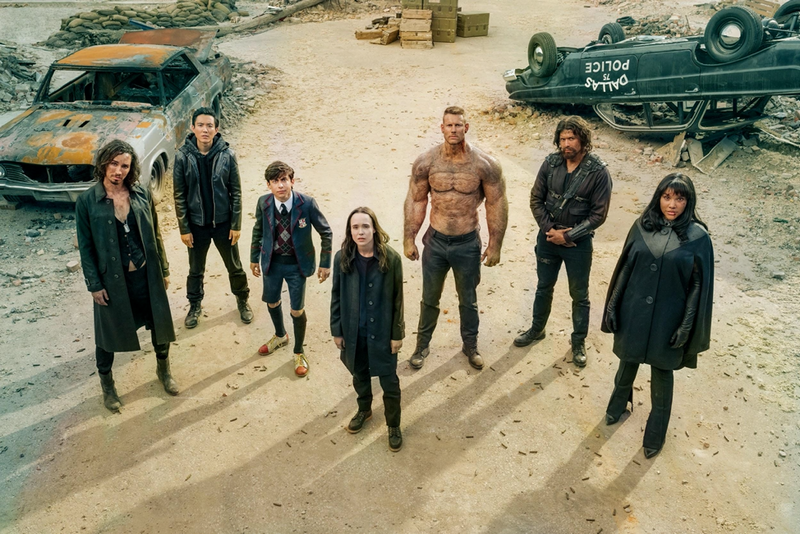 The Evolution of ‘Umbrella Academy’ in Season 2

One of the most buzzed-about binges of the summer is Season 2 of Netflix’s ghoulish and goofy comic book-based series, The Umbrella Academy. Based on the award-winning pages by My Chemical Romance’s Gerard Way and artist Gabriel Ba, the second season started things off by scattering our favorite dysfunctional semi-siblings through time, planting them in 1960s Dallas.

Recently, executive producer and showrunner Steve Blackman, along with most of the Hargreeves clan, sat for a virtual Q&A session with the press where they spoke about how the show changed things up for Season 2, including the themes, the music, the runtime, and – yes – the apocalyptic nature of Ellen Page’s Vanya.

The end of Season 1 saw a bitter and all-powerful Vanya release a bolt of pent-up energy into the sky… and break off an Earth-destroying chunk of the moon in the process. This year, now with amnesia following the battle with her family, Vanya is a newly-healed person. “That release has actually helped her a lot in many ways,” star Ellen Page explained. “She’s much lighter. She’s much more able to connect with human beings in a real way. She falls in love for the first time. She’s more able to be connected to and in control of her emotions.”

“For me, to have the opportunity to film a season where Vanya falls in love for the first time and has this experience and have it be with a woman was a really exciting opportunity,” Page shared. “And especially since it takes place in the 1960s, being able to show some of the obstacles at that time obviously in an era where it was illegal, considered a mental illness. And, yes, to be able to do it in a show like this that has the reach that the show has and to tell a story that I think hopefully shows the beauty and the joy that these women have together and then also reflects very realistic obstacles.”

Setting the story in Dallas, in the early 60s, doesn’t just auspiciously saddle up to the John F. Kennedy assasination, but also the Civil Rights movement, which was deep in the midst of trying to bring about meaningful social change and racial equality. It’s the place that Emmy Raver-Lampman’s Allison finds herself in after she unceremoniously lands in an all-white neighborhood without the ability to speak.

“We definitely challenged ourselves, both production and story, by going to 1960s Dallas,” Blackman said. “It was a tumultuous time, a time of upheaval. This year we dealt with obviously racial injustice, homophobia, and some mental issues. We wanted to do some serious stories and not glaze over them, even though we’re in a heightened world.”

“I did extensive research,” Raver-Lampman said about Allison’s new challenging adventure as a Civil Rights activist who’s now supremely hesitant to use her mind control powers. “I was reading every kind of book and watching every documentary. Congressman Lewis and his life’s work was dedicated to that movement and he was still alive while we were shooting this. He was a living, breathing, inspiration for my work, but also Ruby Bridges, who was the first black child to integrate in an all-white school. She just turned 65. And so I was also looking at these people that are still alive and still dedicating their lives’ work to furthering the message of that movement and ending systemic racism.”

When asked about her favorite moment from Season 2, Raver-Lampman described what she referred to as the “rumor rampage” in the sixth episode, “A Light Supper.”. She enjoyed “getting to see Allison kind of use her powers, kind of for the first time, but also kind of in a way that’s like still unhealthy I think this is how she’s been using her powers her whole life and I think she’s trying to move away from that, but I think for that moment she falls back into her old self and is showing off for Raymond. And then I kind of love how at the end they go back into the diner and it kind of turns into this malicious scenario. And I think for me, I think that’s kind of a side of Allison we haven’t really seen before.”

The first season of The Umbrella Academy not only wowed fans with stellar storytelling, but also a kick-ass soundtrack featuring everything from Queen to Tiffany to Gerard Way’s cover of “Happy Together.” It was a run of songs that was going to be hard to beat.

“Music is a big part of my life,” Blackman said. “Music is another character of the show. I definitely wanted to top Season 1 and I already had sort of the list of songs. Unlike most shows, we don’t add the music after we shoot. We write the music into the show. It’s in the scripts. [The cast] sometimes get to see the songs they’re gonna be playing a scene to a lot of the time, which makes us unique. So the music is really a big part of it and I think we might have topped it in Season 2.”

But aside from getting songs for Season 2 like a cover of Gnarls Barkley’s “Crazy,” a Swedish cover of Adele’s “Hello” and Backstreet Boys’ “Everybody,” Blackman admitted that they weren’t always able to get the tracks they wanted. “I wanted to get a Miley Cyrus cover of ‘Jolene,’” he said. “We just couldn’t get that, this rockin’ version that she does. And there’s a few other songs that we just simply couldn’t afford, but we mostly got the songs that we wanted.”

David Castañeda, who plays Diego, admitted to using the soundtrack to help fuel his performance. “I get very attached,” he said. “I get extremely attached when I read the script. I’ll just put it on my Spotify and I’ll make a playlist out of it.”

Another big difference to the series this season is the show’s format. Instead of 13 one-hour episodes, Season 2 boasts 10 episodes that run about 15 to 20 minutes shorter. This was by design, of course, and it posed its own set of obstacles. “It was more challenging to write in shorter scripts,” Blackman said.

“We were looking at our longer episodes from Season 1 and we felt at certain times they were lagging,” he added. “And I think we are a very binged show. That’s one of the things that we found out about Season 1. And we wanted this to feel like a 10-hour movie, so you just finish one and you go on to another. And we realized around 45 minutes is sort of the time period that feels pretty good for people viewing at home to just go into the next one.”

Even within these shorter storytelling standards, Blackmen felt free to deviate from the comics whenever necessary. “We absolutely have certain limitations,” he said, “in terms of swearing and how much sexuality we can show. We’re definitely a four-quadrant show with very broad demographics, which I think makes us successful but you know, we wanted to be palatable for younger people, as well as older people. But there was no limitation from Gerard and Gabriel — the creators of the graphic novel — to go any place I wanted to go and to deviate in ways and to also pay homage to the comics.”

“So, I felt very free as a creative person and as a creator, to just do whatever stories I could do with these crazy, fun people.”

Aiden Gallagher, who plays Five, finds the comic books crucial to getting the tone right for the series. “I always reference the comic books and MCR’s music in terms of just portraying the tonal quality of whatever scene that Steve writes for us.” he said. “So driving in I’m looking at different panels from the comic book for facial expressions, for mood, and I figure out how I want to portray each line, and I sort of weave them together with connective tissue of elements of if I’m sad at the end, then there has to be vulnerability at the beginning if it’s starting as angry. And then I’ll just use whatever song tonally fits that. And I sort of do that as I’m memorizing the lines and once I get to set, I can bounce it off the other actors and see what their take is and readjust.”

Another huge part of Season 2 is Justin H. Min’s more prominent role as Ben. Still mostly trapped in an ethereal limbo, only seen by Klaus, Ben got to become more of an active member of the team this year (even though many weren’t aware of it).

Then, in the end, when the Hargreeves returned to what they thought was their normal 2019, a brand new Ben was awaiting them. It was a moment Min says was very exciting to read. “To know that there’s this sort of different iteration of Ben that could potentially come in a potential third season is really exciting,” he said. “It was so much fun to shoot that. And then, finally, for my siblings, to be able to make eye contact with me was a huge moment.”

“I think one of the biggest things that we really wanted to do was create as much of a contrast from ghost-Ben to Sparrow-Academy-Ben as possible,” Min continued. “So while these guys were dealing with the crazy snowstorm and shooting of episode ten, I was in the makeup and hair trailer figuring out this new Ben’s look. I think we tried like seven or eight different hairstyles, different scar placements and the size of the scar, and I was able to grow my incredible beard out for the first time on this show.”