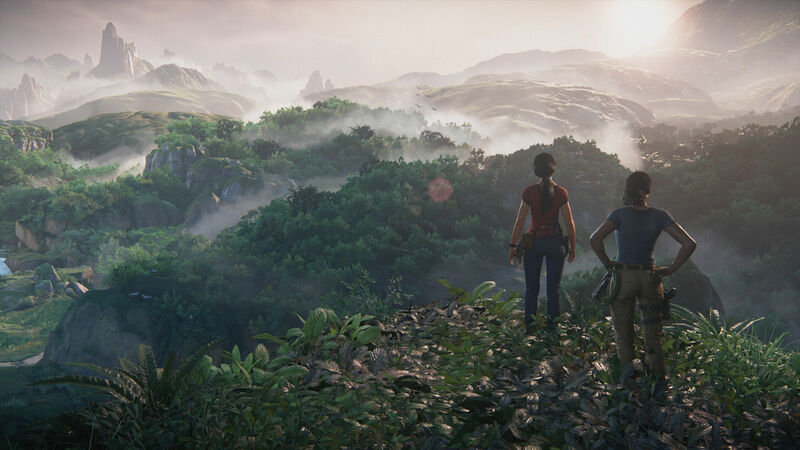 When Uncharted: Lost Legacy was revealed late last year, this unexpected expansion raised its fair share of eyebrows. With Nathan Drake seemingly out of the picture, the first gameplay demo the world saw looked unlike anything else we’d seen from the long-running franchise.

Instead of the series’ mascot quipping his way out of a jungle, Naughty Dog’s gritty new trailer showed a mysterious veiled woman (who turned out to be Uncharted 2’s Chloe) sneaking through the streets of a war-torn Indian city. With explosions rocking nearby buildings and snarling rebel soldiers dragging civilians out of their homes, this surprise expansion hinted at a very different type of Uncharted game.

Now that Lost Legacy’s actually here though, we’re sorry to say that those hoping for a darker take on the popular franchise are going to be severely disappointed. While the first level gives you a nice glimpse into what a bleaker kind of treasure hunt might look like, the rest of Lost Legacy is very much just another Uncharted game – for better and for worse.

Nathan Drake is nowhere to be seen

Placed in the shoes of Uncharted 2’s Chloe Frazer, an artefact you find in the city soon sends you off to the sprawling Indian countryside.

Unsurprisingly, you’re after a legendary treasure once again, but this time it’s one that belonged to the ancient Hoysala Empire. With Uncharted 4’s moody mercenary Nadine tagging along for the ride, the pair soon find themselves in a trusty 4×4, exploring the same kind of luscious green locales that wowed us in last year’s A Thief’s End.

Mercifully though, it’s not all re-treading old ground here. For the first time in the series, Lost Legacy’s fourth chapter puts players into a sprawling open landscape, giving them an expansive playground to explore at their leisure.

Tasked with tracking down a slew of ancient artefacts, you’re free to tackle each mini temple in whatever order you please, with other hidden collectibles also scattered throughout the landscape.

While finding additional trinkets can often be a bit of a drag in open world games, Lost Legacy thankfully doesn’t hide these precious tokens in absurd places, instead demanding that you earn them by solving various puzzles or engaging in a spot of platforming.

While Uncharted isn’t exactly known for its head scratching puzzles, we were surprised by how varied and enjoyable these little trials were, with puzzles ranging from everything to fiddly rotating dials to trickily timed switches.

Open environments are the breath of fresh air that ‘Uncharted’ needed

Some of those optional tokens, however, will be a bit simpler to track down, with a couple merely sitting inside crumbling buildings. While that may not sound particularly exciting, stumbling on a trinket inside an old tower you just spotted on the horizon feels like a genuine archaeological discovery. It adds a fun sense of adventure to treasure hunting, feeling slightly reminiscent of the recent Tomb Raider games.

Thanks to the varied puzzles and the sheer size of the map, this open chapter is a refreshing change of pace from the series’ usually painfully linear adventures.

Unfortunately, though, that sense of freedom doesn’t last long. Without wanting to spoil anything, the usual bait and switch shenanigans you’d expect from an Uncharted adventure rear their head, causing the rest of the game to sharply change tack.

After letting players off the lead for the first time, it feels as though the game designers were all too swift to put them back in their place, quickly sending players back to the tried-and-tested linear temple missions of old. This means that the last half of the game falls into a predictable Uncharted rhythm, with Chloe and Nadine jumping around a bit, gunning down a few enemies and then solving the occasional simplistic puzzle.

But a poor story lets ‘Lost Legacy’ down

The core gameplay here is still undeniably great, but sadly, there’s just not a strong enough narrative to keep players motivated. After the brilliant and emotional journey players embarked on in Uncharted 4, it’s pretty disappointing to be following characters that feel so poorly fleshed out.

Without a compelling reason to keep pushing through each new area, the generic script turns what should have been an exciting adventure into a series of repetitive action movie tropes.  There’s a fan-pleasing appearance from a key Uncharted character towards the end of the game, but at that point – it’s simply too little too late.

Is ‘Uncharted: Lost Legacy’ any good?

Still, despite the poor narrative, there is some fun to be had throughout the 9 or so hours it’ll take you to beat Lost Legacy. While it’s definitely not the globe-trotting adventure of a full, numbered Uncharted, this expansion has a few great moments of its own.  If you’re desperate to lose yourself in another treasure-hunting escapade, Lost Legacy will be just the ticket. For everyone who still feels satisfied by the giddy highs of last year’s Uncharted 4 though, your money is probably better spent elsewhere.