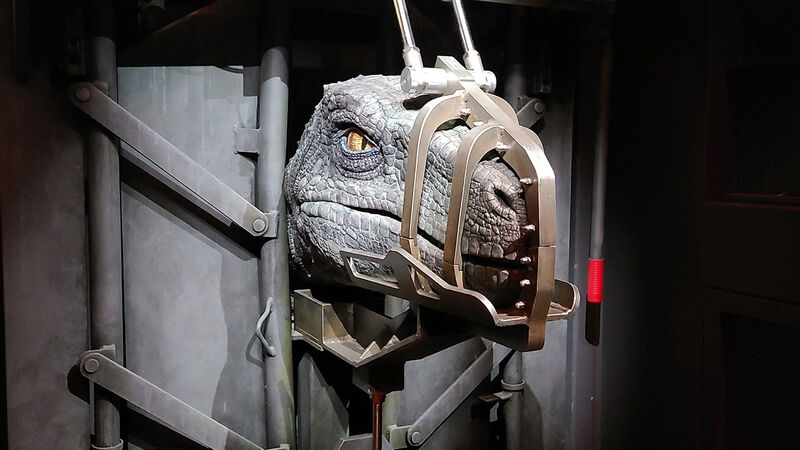 Before Jurassic Park opened, most people had very little knowledge about velociraptors, if they had even heard of them at all. But things quickly changed once viewers saw the raptors in action in Steven Spielberg’s classic 1993 film, as they became a standout element of both that first movie and the entire series that followed.

Given the raptors’ constant presence in the films, it feels like an adventure 28 years in the making now that the ride Jurassic World: VelociCoaster has opened at Universal Orlando’s Islands of Adventure. A new flagship attraction at the park, the VelociCoaster made its official debut this past week, and I attended the media event for Fandom.

Read on for more info on VelociCoaster‘s creation, what it feels like to ride it, and how it taps into the love Jurassic fans have for those decidedly clever girls…

Why have raptors made such a big impression in the Jurassic films? On Fandom’s Jurassic Park wiki, Kind Pegasus 95 wrote, “What I think makes the Raptors so memorable and iconic is how creepily smart they are.”

Zack Stentz, who developed Jurassic World: Camp Crustaceous, and serves as a Consulting Producer on that Netflix animated series, told Fandom that Jurassic Park, both the film and the novel, introduced a lot of new concepts about dinosaurs to people. “In the 80s, if you’d asked ‘What do you think of when you think of a dinosaur?’ they’d probably say a T-Rex or a brontosaurus. The idea that dinosaurs could be intelligent pack hunters was really a concept that blew people’s minds. It made the raptors in that first movie really stand out.”

That innate intelligence has been a key trait for the creatures since their introduction – who can forget when one of them figured out how to open a door? – which was underlined further when Jurassic World brought the franchise back in 2015. Therapod king noted, “Jurassic World and Fallen Kingdom also furthered many [people’s] love of raptors with the introduction of Blue and her ability of empathy.”

Blue has not only been a continuing presence in the Jurassic World films but also popped up on Camp Crustaceous. Stentz said the character was very near and dear to Jurassic World writer/director Colin Trevorrow’s heart, noting, “We promised him when we featured Blue, we’d feature her in a big way and in a way that was consistent with what we saw in Jurassic World and Fallen Kingdom.” He added that it was important that even when Blue might be helpful, “We made sure we wrote her as a wild animal at all times, not just a big, scaly dog.”

Regarding the decision to focus the VelociCoaster around the raptors in the first place, Universal Creative’s Shelby Honea, who served as Show Producer for the ride, told me that the existence of Blue – and her unique relationship with Owen Grady – played a role.

Said Honea, “Jurassic World is such a fun franchise and there’s so much opportunity but it became clear people love the raptors. They love Blue and they love [fellow raptors] Charlie, Echo, and Delta. But Blue’s really a star of the franchise in her own right. As we were doing some early brainstorming, even including the filmmakers, and thinking about what would be another attraction for Jurassic World, we knew that all eyes are on this raptor pack that Owen has trained, for a number of reasons.”

The in-universe story for the attraction is that the VelociCoaster is a ride that has been added to Jurassic World itself (clearly before the events of the 2015 film), which is running right through the raptor paddock. Before boarding the ride, we see Claire Dearing (Bryce Dallas Howard) and Owen (Chris Pratt) discussing the ride on video screens – well, arguing about it, really – and Owen makes it clear he thinks the ride’s existence a very, very bad idea, pointing out just how fast and smart the raptors are.

Honea explained that when they were discussing the popularity of the raptors in our world, they realized that could apply to the Jurassic World universe as well, noting, “Of course Claire, as Director of Operations, would want to capitalize on that [popularity] as well. So it really made perfect sense in our franchise. It delivers characters that people love and also a lot of the thrill of this attraction is inspired by the raptors themselves.”

Sitting inside the Jurassic Park land at Islands of Adventure, VelociCoaster is the second major attraction inspired by the Jurassic franchise at Universal Orlando, after the water-based Jurassic Park: River Adventure. Having had the opportunity to go on the VelociCoaster myself, I can say it is a truly terrific coaster that has some wonderfully surprising moments of sudden high speed that deliver some great jolts, along with a ton of inversions (via loops and corkscrews) that just keep coming and evoke some big screams of fun – and maybe some occasional terror.

One moment, near the end, over the water, is particularly effective, as you feel like you are going to go straight into that water. And yes, you do spot Blue and her buddies along the way, while what also stands out is how smooth the ride moves, even as it’s spinning you upside down.

“Just the mere fact that man is being outdone by an animal, the beasts we wish to dominate, is a horror in itself. Aside from that aspect, the designs are chilling as well: gray skin, yellow eyes and robust jaws, create the perfect fiend. Not hulking like the Tyrannosaur, nor disturbing like the Dilophosaurus, but instead a killing machine, a weapon of primal nature.”

– Carnotaur on what makes velociraptors stand out

Discussing the early decision to make the newest Jurassic attraction a thrill ride, Honea remarked, “Really, from day one, it was very clear that thrill was an important piece of the DNA [of Jurassic World] and perhaps the most important piece. We wanted to make sure that the thrill factor packed a major punch. So really, it was ‘Thrill’ on that blank piece of paper when we started. It just made perfect sense with the type of excitement that we wanted to deliver with this attraction.”

The ride also has an impressively big geographic footprint, running around and over much of the Jurassic Park land, and giving you some great views of many areas of the park from a unique vantage – I enjoyed my quick glimpses at the likes of The Wizarding World of Harry Potter or the Hulk coaster as I zipped up and down.

When it came to figuring out exactly how the ride would physically fit into Islands of Adventure and the existing Jurassic Park land, Honea explained, “We had to be very strategic about the site and how to use it and [Layout Designer] Keith McVeen and [Art Director] Greg Hall did a fantastic job of studying the sightlines, studying where columns went, studying the view across the lagoon, so every aspect of this coaster was thoughtfully and strategically placed to maximize thrill, maintain immersion, and deliver on teeth.”

Jurassic World is of course based around the idea of a theme park itself, meaning there is a meta aspect to the depiction of the park when you go on the VelociCoaster, considering its real life placement in Universal Orlando.

As you walk through the queue, you are constantly and effectively reminded that, story-wise, you are within Jurassic World, as Dr. Henry Wu (BD Wong) discusses the background of the raptors on a video screen or Owen sarcastically jokes about hoping Claire got the guests to sign waivers, considering the danger they’re going to be in. Oh, and then there’s the part of the line when you see all four of the Jurassic World raptors locked up, getting ready to be unleashed (as seen in the photo at the top of the page), which are very convincing animatronics.

Honea had high praise for the actors from the film and their involvement in the ride, saying, “They know their characters so well and are so fantastic together. It was a lot of fun pitching this attraction to them so they’d have some understanding of it. We were like, ‘Okay, Claire is putting a rollercoaster in the Raptor paddock. How do you think that would go for Owen?’ And [Chris Pratt] was like, ‘He would hate it!’ They just understood immediately what their characters were going to be doing, why they would be doing this, and how they would be feeling and it was great having them as part of this attraction.”

“They have been portrayed as both antagonists and protagonists, and side antagonists like in jp3 and in the lost world.”

– Jurassicworldevolutionfan01 on the unique role raptors have had in the films

Added Honea, of the VelociCoaster blending of truth and fiction, and basing a real ride around an imaginary theme park, “As theme park designers, this is the most fun you can possibly have. The canon is an operating tourist attraction! It allows us to play with the tropes and some of the aspects of theme park design but put it through this really fun lens of Jurassic World and dinosaurs. It’s totally a dream come true for the team and so much fun to play in that world.”

She added, with a grin, “If only we could get some real dinosaurs in here…”