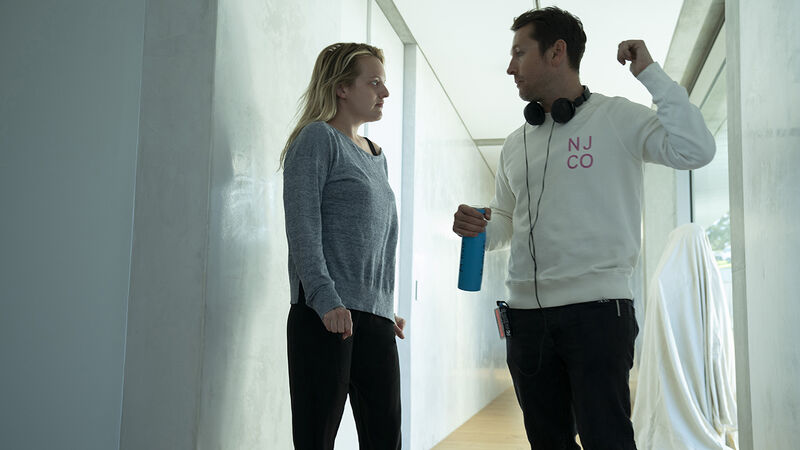 Director Leigh Whannell has repeatedly denied talk of an Upgrade sequel. The film, produced by Jason Blum’s super-fertile production company, Blumhouse, was made on a characteristically low budget and exceeded expectations at the box office. On top of that, it was a critical hit. With the film garnering an army of fans, and the futuristic story — about a technophobe paralysed in an unprovoked attack who receives cybernetic implants then seeks revenge — ripe for revisiting, there’s been clamour for a sequel since the film’s release in 2018. Not least from Fandom user GamerGangGang, who wanted to know where Whannell and Blum are at with that.

Whannell says he’d be very up for making a follow-up with an increased budget, signing off from our chat with a promising “We’ll see”.

“A sequel is a champagne problem created by the success of a movie,” says Whannell when we meet to talk about his latest film, The Invisible Man. “So Hollywood economics dictates whether there’s going to be a sequel, and Upgrade… I wouldn’t exactly call it a monster hit. I’d call it a cult hit, and cult hits, when they look at the books of cult hits, they’re like ‘Nyah, sequel’. So we’ll see. I loved making that film, so I’d love to do it with a bit more money.”

“I would love an Upgrade sequel,” says Blum. “I will say that we haven’t put it to bed yet. We have no immediate plans, but Upgrade is very much on my mind — and on Leigh’s mind as well.”

Blum and Whannell’s latest collaboration – The Invisible Man – is an updated retelling of HG Wells’s classic story. Or upgraded, if you will. But the character is perhaps more synonymous with the roster of Universal Classic Monsters that includes Dracula, The Mummy and The Wolf Man, as well as Frankenstein. Which is a story Blum would be keen to tackle next, at least according to his response to Fandom user Nicholas Pearl‘s question about which Universal Monster franchise he’d most want to reboot after The Invisible Man: “Upgrade was Frankenstein-ish, in a way, but … it would be very fun to think ‘what is the modern-day Frankenstein?”

The Invisible Man could very well nearly have been Frankenstein, in fact – the choice of monsters for Leigh to tackle included all those classic characters.

“I really was asking Leigh to do any…,” says Blum. “I said, ‘What about Dracula? What about Frankenstein? Whatever’. And he was drawn to the Invisible Man.”

“The movie’s about a lot of things, but [is it] about a woman in a very abusive relationship? Yeah.” — Jason Blum

Whannell’s adaptation is seen through the eyes of a woman – Elisabeth Moss’s character Cecilia — who escapes an abusive relationship, and is haunted by her abuser in the aftermath. Almost literally, in this case – and it’s a metaphor for the ongoing turmoil caused by abuse. But was it directly influenced by Hollywood’s #MeToo movement? There are certainly references to rich, successful men taking advantage of their power and using it to ‘own’ people.

“I think that artists pull from what’s out there in the world and clearly that’s out there,” says Blum. “And obviously it affected Leigh’s version of the movie. Because the movie’s about a lot of things, but [is it] about a woman in a very abusive relationship? And a woman being gaslit by a man, and then no one believing her, which is very topical at the moment? Yeah.”

For Whannell – on a conscious level at least – his take on The Invisible Man was mainly an exercise in creating tension.

“With this movie, I was trying to make something crushingly suspenseful,” says Whannell. “I wanted to make one of those suspenseful films that is actually stressful to watch; where you’re not actually having a good time at the movies, where you’re uncomfortable, your palms are sweating. I’ve seen a handful of movies like that in my life. You know, everything from a film like Misery all the way to a recent film like Hereditary. I thought Hereditary was stressful to watch and so I was wanting to make a film in that tradition. And that was the biggest challenge, more so than adapting The Invisible Man as a story.”

“What I wanted to do is make the Gone Girl version of it; drag it out of the fog-bound streets of London into our modern-day reality.” — Leigh Whannell

And, in fact, it was important for Whannell to steer some way away from the story’s origins, which is in part why he avoided the likes of Dracula.

“I felt that The Invisible Man had the most potential for me,” he explains. “I’m still a fan of Dracula and there was a delight in watching the recent BBC series about Dracula, just to see someone take on this character. The difference was, with that series, it had a very Gothic feeling; a retro feeling … they weren’t afraid to embrace the whole cape and the whole Transylvanian thing. Whereas I wanted to strip away all the Gothic trappings of the character.”

Aside from Hereditary and Misery, Whannell mentions another surprising movie that influenced his version of the classic story.

“There’s a version of The Invisible Man that you could make that would be set in the 1800s, London, [there’d] be a lot of, like, clip clop clip clop, you know. Get your paper! Invisible Phantom strikes again! There’d be gas lanterns and fog on the ground of Soho, and I think I’d rather watch that version than make it. What I wanted to do is make the Gone Girl version of it; drag it out of the fog-bound streets of London into our modern-day reality. And almost make the film as if no one had ever made an Invisible Man movie before and this was the very first.”

The Enduring Appeal of ‘The Invisible Man’

So what is it about The Invisible Man that appeals to audiences and makes the concept ripe for remaking?

“The absence of him is his power. You think about other monsters that were created in that era, whether it’s Dracula… there’s a whole load of visual iconography — the fangs, the cape, the bat,” says the Saw co-creator. “The Invisible Man, I find that character fascinating because when you’re not seeing someone at all, it gives you a lot of potential to create fear because you’re using sound, you’re using paranoia. When someone’s not there, you’re paranoid that they are there. And I think a lot of Invisible Man movies in the past have approached the character, I believe, wrongly — because they put clothes on him. To me, that character is the Visible Man. I don’t want to see an invisible character with a hat and a trench coat and the sunglasses. What’s scary to me is not seeing anything at all and wondering, ‘Is someone right there?”

For Jason Blum, the appeal of the character lies in the simple notion that we’d all love to be invisible.

Blumhouse’s ‘The Hunt’ Could Be the Next ‘Get Out’

Ghost stories are also timeless, which goes some way to explaining the success Jason Blum has had with the Paranormal Activity and Insidious franchises. But if tapping into the zeitgeist, and the social and political climate of the time, is an indicator of success, then his next venture, The Hunt, looks set to go stratospheric. It’s already courted plenty of controversy – as films that cut close to the bone are wont to do – and its social commentary should see it elevated beyond simple, plain horror (whatever that is). A film in the vein of Get Out perhaps, another of Jason Blum’s successes?

While Blum says he doesn’t know what films are going to take off, he does admit to having a feeling about The Hunt. Due out in March, The Hunt‘s premise revolves around 12 strangers who wake up in a clearing to discover they have been chosen to take part in a game where they are hunted by the elite. It’s based on a 1924 short story called The Most Dangerous Game, and is a satire about the US’s political divide.

“I don’t know where’s the next Get Out or what’s going to happen next,” he says. “After The Invisible Man we have The Hunt, and I think The Hunt is gonna really reverberate culturally, and I’m very excited about that. That came out of nowhere too, so I don’t know where the next one comes from, but I’m always on the lookout.”

Back to Frankenstein, then. I tell Blum about a recent episode of Doctor Who that saw an unfinished Cyberman head back to the 1800s to inadvertently become the inspiration for Mary Shelley to write her famous novel.

“Maybe we will expand that into a movie,” he muses. You can see the cogs working.

Blum, of course, rebooted Halloween in 2018 with a successful sequel to John Carpenter’s original film before announcing two further sequels. Having also now brought a new version of The Invisible Man to the screen, you can’t help but wonder whether this prolific and enthusiastic producer feels there’s any title that’s untouchable.

“Is there any historic property that I feel is untouchable?” he pauses to think for ages. “Of course. There are books; there are stories from other mediums that I feel that I wouldn’t touch. But the notion that a movie is untouchable? I guess there are movies that are untouchable, too. The answer to your question is yes. The less cynical part of me has decided that yes, there are, even though, especially being in England [right now], the Hollywood producer in me wants to fit right into the stereotype and say nothing is untouchable. I can’t agree with that statement. As much as I’d like to make it. I can’t agree with it.”

Blum seems reluctant to give examples, so the talk turns to the notion that high-concept films can be remade, while low-concept movies are more difficult/impossible.

I suggest The Breakfast Club as a film that resists adaptation. Not exactly a horror, but there’s certainly a darkness to it, and if Blum can call Blumhouse film Whiplash a horror — and he does — then you can probably find horror in John Hughes’s 1985 classic. Mr Vernon is certainly a formidable antagonist. Not that Blumhouse only makes horror.

“The Breakfast Club would be very hard to remake, yes … because it captures a time. I agree with you about that.”

So while we might see Blumhouse’s version of Frankenstein, it’s unlikely we’ll see its adaptation of The Breakfast Club any time soon.

One smash horror success of recent years Blum wishes he could have been involved in is The Conjuring franchise.

“A Conjuring universe … I thought that was preposterous.” — Jason Blum

“I’ll tell you a funny story about The Conjuring,” Blum begins. “A month or two after it turned into a huge hit, someone — it might have been James Wan, even — but someone said to me: “We’re going to make a Conjuring universe”. It wasn’t James because I wouldn’t have doubted James, [it was] someone else who was involved in it. If James had said it, I would have believed it. But I thought that was preposterous and, in fact, that’s what they did. It’s pretty amazing — it goes off into all these things, and I would love to have been involved with it. In fact, I thought about it this morning when I was at the gym!”

His early dismissal of The Conjuring might be fuelling his punishment of himself on the treadmill today, but tomorrow will surely usher in the dawn of a whole new successful horror franchise for Blum. Whether that’s The Hunt, or one of his many other projects, time will tell. But it’ll happen.