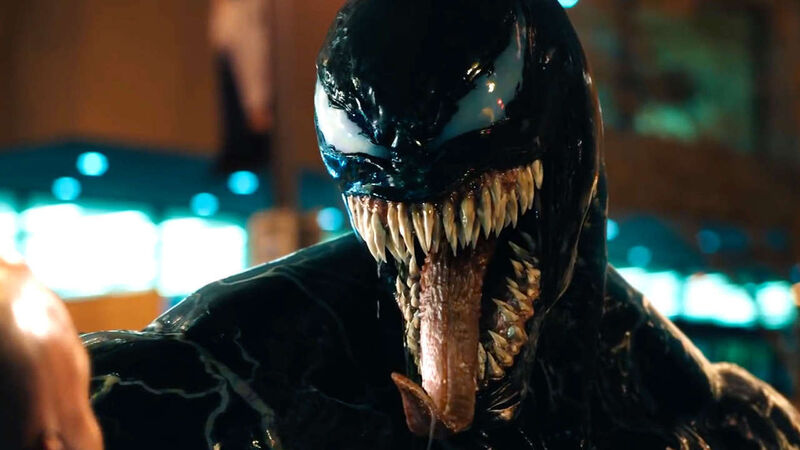 ‘Venom’: 10 Crucial Terms You Need to Know Before You See It

On October 5, Tom Hardy (and a heavy dose of CGI) will bring the beloved Spider-Man villain Venom to the big screen. For die-hard comics fans, bringing Venom to life in his own film has been decades in the making. For the casual moviegoer, however, deciphering the complex mythology surrounding alien symbiotes and shadowy foundations might seem daunting, to say the least. To help, here are some names and concepts likely to play a role in Venom.

In Secret Wars, Spider-Man — along with other heroes and villains — is whisked away to a far-off planet by the all-powerful Beyonder. There, a machine Spider-Man discovers produces a black sphere that attaches to him and turns into a costume, a black version of his traditional red-and-blue threads. Not only does it take the form of any clothing Peter imagines, it also enhances his strength and ability. Spidey makes the strange material his new costume.

Back on Earth, the costume begins to misbehave — taking over Spider-Man’s body while he sleeps and attacking people on its own. Peter discovers the costume is actually a living, sentient alien attempting to bond permanently with him. He tries to rid himself of the costume but it refuses to let Peter go. Knowing that sonic waves hurt it, Spider-Man is able to seemingly destroy it by overloading it with the sounds of church bells.

The symbiote manages to survive in the church until disgraced reporter Eddie Brock — who blames Spider-Man for ruining his career — happens upon it. Sensing the shared animosity toward Spider-Man, the symbiote bonds with Brock, forming the creature known as Venom. Venom’s combined hatred of Spider-Man causes him to attack Spider-Man and terrorize his loved ones.

Eventually, Spidey stops Venom and an uneasy truce is formed. Venom agrees to end his vendetta if Spider-Man agrees to leave him alone. Venom eventually becomes something of a vigilante, returning to San Francisco and protecting the homeless there. As an anti-hero, Venom avoids killing innocents but has no problem taking the lives of those who would seek to harm them.

The Venom symbiote is actually a member of an alien species known as the Klyntar who hail from the planet of the same name. Symbiotes, as a species, are shape-shifting alien beings who seek hosts with which they form a symbiotic bond. Created by the malevolent god Knull, the Klyntar rebelled and imprisoned him on Klyntar, a planet of their own creation.

The Klyntar bond with host species to form a new entity, in much the way Spider-Man’s symbiote costume bonded with Eddie Brock to form Venom. Each host creates a distinct entity, and over the centuries, the Klyntar’s symbiotic bonds have added much to the Klyntar essence, including alien concepts such as honor and peace. Because of this, not all symbiotes are malicious, but even the “good” ones are the product of an evil god.

The God of the Symbiotes, Knull is a powerful being older than the universe itself. He possesses godlike powers and uses them against the Celestials, who were busy creating the universe. He even created a sword, All-Black, from his shadow. Angered that darkness would be broken by the light of creation, he wages war against the other gods.

To aid in his fight, Knull creates an army of symbiotes to lay waste to countless worlds. After a battle with Thor, Knull finds himself trapped in the symbiote dragon Grendel, breaking his hold on the symbiotes he’d created. The symbiotes then turn on their god and imprison Knull’s body on their homeworld.

After freeing themselves from the control of Knull, the Klyntar hive-mind, influenced by the many benevolent hosts the symbiotes had bonded with, decides to leave their dark past behind and become a force for good in the universe. However, the Klyntar with corrupt hosts reject this idea and are shunned from the hive mind.

The renegade symbiotes form the Symbiote Imperium, an army of destruction designed to continue the Klyntar’s original purpose of bringing death and devastation to the universe. So successful is the Imperium that the name Klyntar becomes synonymous with evil, despite the existence of so many peaceful symbiotes. Venom was once a member of the Imperium.

Venom’s arch-nemesis (outside of Spider-Man), Carnage is “born” when the Venom symbiote breaks Eddie Brock out of prison. Demerged from the symbiote, Brock is sent to a prison for non-powered humans where he shares a cell with vicious serial killer Cletus Kasady. Among other crimes, Cletus killed his grandmother, tortured his mother’s dog, and burned down an orphanage.

In the haste to escape, Venom leaves a piece of itself behind. That piece bonds with Kasady, forming the symbiote known as Carnage. Far more violent and powerful than any other symbiote, Carnage’s bloodlust leads him on a vicious murder spree. Only by joining forces are Spider-Man and Venom able to defeat the deadly symbiote. Carnage’s presence in Venom has not been officially announced, but fans are hopeful he’ll make an appearance, even if it’s only a cameo.

A symbiote created from the Venom symbiote, it originally bonds with mercenary Trevor Cole. Reportedly the film’s main antagonist, Riot instead bonds with Dr. Carlton Drake, who created Riot and its siblings in the comics. In Venom: Lethal Protector, the Life Foundation creates five symbiote “children” from extracts of the Venom symbiote. Riot proves to be the most violent and unstable of the bunch.

The symbiotes are to serve as the guardians of the Life Foundation. Unfortunately for the foundation, the symbiotes choose to test their newly acquired abilities on Spider-Man and a very peeved Venom. Ultimately the symbiotes, including Riot, are artificially aged to dust by Venom, and their powerless hosts are caught in an explosion. Eventually, though, both the symbiotes and the hosts return, because comics.

The Life Foundation, led by Carlton Drake (played by Riz Ahmed in the film), is a survivalist organization convinced that doomsday is right around the corner, particularly in the form of nuclear holocaust. The foundation dedicates itself to preparing for that outcome, building fallout shelters to protect the wealthy elite. Through his foundation, Drake has stolen, kidnapped, and even murdered to further his group’s goals.

All symbiotes gain abilities through Parasitic Inheritance, the ability to mimic powers and skills through interfacing with the host’s genetic code. In the case of Venom, it was able to mimic Spider-Man’s wall-crawling powers and even his web shooters. When the symbiote passed to Eddie Brock, it retained these abilities, gaining new ones as it passed from host to host.

Genetic Memory, in the case of the symbiotes, refers to the ability to access information by tapping into the memories of its host. It can even recall memories of previous hosts, much to Spider-Man’s dismay. Venom was able to track down Spider-Man — and terrify Mary Jane — because the symbiote knew his secret identity from having already bonded with him.

After Venom’s immensely popular run as a Spider-Man villain and occasional reluctant ally, Marvel gave Venom his own limited series, the eight-part Venom: Lethal Protector. The series sees Eddie Brock return to his hometown of San Francisco, having given up his vendetta against Spider-Man. While there, he turns to vigilantism, particularly helping a group of homeless people living under the city.

Venom soon runs afoul of the Life Foundation, who capture him and extract five “offspring” from the symbiote. These new symbiotes bond with volunteers to become the guardians of the Life Foundation. With Spider-Man’s help, Venom defeats the guardians and ruins the foundation’s plans to steal an underground gold deposit. The film is reportedly based in part on this mini-series.