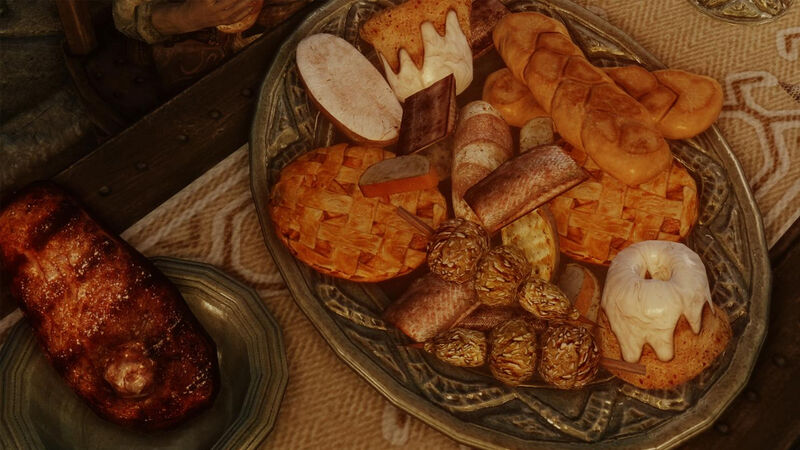 Sure, if you don’t have any food in real life, things can go sideways quickly—but that’s not what I’m talking about. Obviously, I’m talking about video games. Good food design can create deliciously (or stomach-churningly) memorable gaming moments, boost your stats, and help you connect with the people around you.

So, wash your hands, tie your bib, and have a seat: we’re about to chow down on the best (and worst) foods in video games.

Louisiana may be known for its cuisine, but I’m not exactly excited to tuck into this particular feast. First, it looks super gross. (I don’t find human meat particularly appetizing and, frankly, I doubt their kitchen is up to code.) Second, Lucas Baker chucks a plate of it at you (which is just rude—definitely going to affect the Yelp review). Third, it has blood all over it (unsanitary). I’m gonna have to pass on this one, even if it offends Marguerite Baker. What’s she gonna do, try to kill me with spooky crotch-bugs?

I wouldn’t even drink the Monkey Island series’ grog on a dare. I mean, I’d happily make Guybrush Threepwood do it. But me? Nah. According to the Monkey Island wiki, grog is “a secret mixture that contains one or more of the following: Kerosene, Propylene Glycol, Artificial Sweeteners, Sulfuric Acid, Rum, Acetone, Battery Acid, red dye#2, SCUMM, Axle grease and/or pepperoni.” I like exactly two things on that list and, no, I will not tell you which ones. Grog is powerful enough to eat through even the toughest of arbitrary items keeping Guybrush from finishing whatever puzzle he’s doing. I drink a lot of Diet Coke, but that’s a rickety rope bridge too far—even for me!

So, it turns out that post-nuclear apocalypse food is… bad. I don’t have much of an appetite for radscorpion stew or rat brain omelette, but I’m also not looking to eat processed garbage, like boxed mac n’ cheese or Cram. The world may have ended, but my body is still a temple. Oh, also: a lot of the food (like—most of it) will give you full-blown radiation poisoning. Gross and actively harmful to my health? Hard pass.

I’m not falling for that one again.

Okay, this food isn’t actively harmful, per se, but it doesn’t look like it would sit well, y’know? Most of it is just kibble, and the stuff that isn’t is flat-out gross. I’m not typically one to turn down a burger, but Cyberpunk 2077’s disconcertingly smooth meat circle of sadness makes kibble look downright appetizing.

The food in Dishonored is edible, and that’s probably the best thing that can be said about it. Adventurous eaters will enjoy the rat skewers, whale meat, and brined hagfish; real-life Brits will chow down on jellied eels (which are exactly what they sound like); and I will feel super sick just looking at all of it.

Food in The Sims can be a challenge, to say the least. If your Sim isn’t a particularly good cook, making a salad can (SOMEHOW) result in a devastating house fire (LITERALLY HOW??). However, if you get those skill points up, you can wind up creating culinary masterpieces—many of which actually look pretty tasty, particularly in recent games, and not at all like weird lumps of yellowish pixels (see above) that theoretically could be mac n’ cheese. Park your Sim in front of the cooking channel for a low-effort way to unlock their inner Remy Ratatouille! Plus, what’s more fun than watching someone else watch tv? Video games really do transport you to magical new worlds.

Of course, there’s nothing more magical than a hard day’s work. In Stardew Valley, your little farmer has a lot to do throughout the day. (Did you know running a farm singlehandedly is kind of exhausting, actually?) To prevent inconveniently passing out in the town square in front of your beautiful girlfriend Abigail, you can fuel up with a variety of foods, ranging from the tasty and normal (pizza, maki roll, chocolate cake) to the mystery and bun (mystery bun). Though the food can sound appetizing, at best it just looks like cute, simple pixel art. That makes sense for our farmer, who is also cute, simple pixel art (photorealistic food would kill them immediately), but for me, a photorealistic person, it doesn’t quite cut it.

Speaking of photorealistic food, Fire Emblem: Three Houses has that! Technically. Sure, you can have a delicately rendered scone, or a hearty-looking beast meat teppanyaki, but when it comes to the baskets of fruit over there, you’re looking at what’s likely just a low-poly photograph squished onto the world’s flattest texture. To be honest, though, it’s more charming than it is disgusting. And who doesn’t like flat fruit? (Don’t answer that.)

It’s been on the ground for who knows how long, and I don’t care. This 2D gyro hell meal looks hella good, and, if I were Zagreus, I’d stop to chow down every time. Sure, there isn’t a lot of variety in the afterlife, but, if your only available meal looks this dang delicious, then who needs it? Just wash it down with a bottle of refreshing ambrosia and get back to figuring out how the rail gun works.

Sure, not everything in Skyrim is appetizing—if I have to look at the word “horker” next to the word “loaf” one more time, I swear I’m gonna hork—but the vast majority of it… honestly, looks really good. Okay, so there isn’t a huge selection, but, given the fact that every town you visit looks exactly the same as the last one, it’s kind of a miracle that we’ve been blessed with the amount of variety we’ve got. Scarf some steamed mudcrab legs, an inexplicably half-pound boiled crème treat, or one of several stamina-boosting soups and stews. Of course, you could always do what I do—take breaks in the middle of battle to gulp down 15 wheels of Eidar cheese and 40 sacks of flour. Fear me, bandits!

The Legend of Zelda:
Breath of the Wild

If you’re looking for some real culinary variety, then The Legend of Zelda: Breath of the Wild has you covered. Hyrule is blessed with seemingly endless ingredients, which, of course, can be combined in seemingly endless-er combinations. Fancy quest foods like salmon meunière and royal fruitcake are nice and all, but I’ll never say no to a classic salt-grilled meat or mushroom skewer. Plus, if you make something really good, you get to hear a cute little song! That never happens IRL. If it did, I would probably cook a lot more.

If you’re tired of cooking for yourself (valid), then hop on over to the Monster Hunter canteen, where the disconcertingly buff Meowscular Chef will create culinary masterpieces for your enjoyment. Pile a platter high with your perfect combo, or put your faith in the chef to give you something that won’t make monsters want to attack you more than usual. Either way, it’s going to be rendered beautifully and look good enough to eat with your actual human mouth.

The thing about the food in Yakuza 6 is that… it’s literally just pictures of real food. But, dang, it looks really good, okay? Whether you’re sinking your teeth into a Rib-Eye at Ikinari Steak, or just chilling on a charming patio in Onomichi, Yakuza 6 is a perfect way to whet your appetite. Besides, who doesn’t like sitting on a patio and looking at photos of food? That’s, like, my favorite hobby.

Absolutely no game makes me hungrier than Final Fantasy XV, and it’s no mystery as to why: the game devs have (literally) gone out of their way to make each meal as gorgeously realistic as possible. In an interview with Eater, the game’s art director, Tomohiro Hasegawa, revealed that the team often would cook the mealsies for realsies in order to get a more accurate rendering. “It’s actually pretty difficult to make something look tasty in the game,” he said. “And I believe what beats even the best photography is the personal experience.” The team would go out and actually cook each meal on a camp stove, to more accurately match the circumstances of the in-game characters. Not only does a delicious meal help the characters bond with each other, it helps me be very, very hungry and have no way to fix it. Thanks, Final Fantasy! I guess I gotta go catch a trout now.