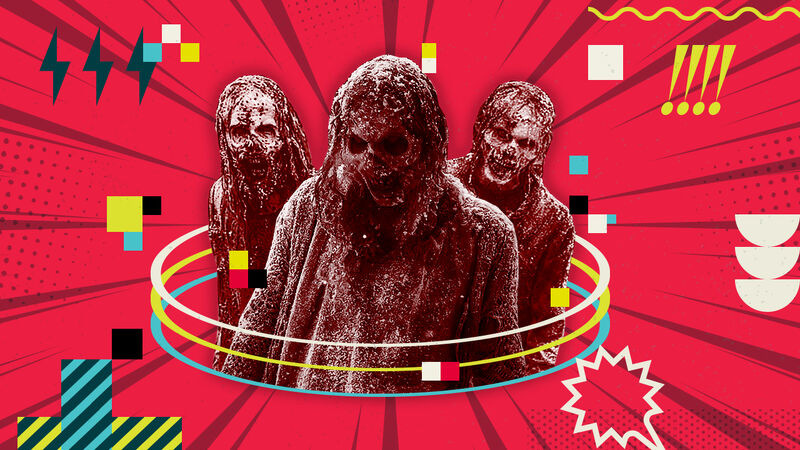 Since Day One of The Walking Dead, the show’s zombies have been evolving. Series executive producer and all-round practical effects genius, Greg Nicotero has made it a primary focus to really think about how undead bodies would deteriorate if they were real, and how different external factors would result in varying effects on their appearance. Consequently, with each passing season, walker development has stepped up a notch, bringing audiences ever more jaw-dropping effects and iterations of the undead.

“It’s hugely impressive, what they do,” says Carol actress Melissa McBride, speaking to Fandom at San Diego Comic-Con as the show gears up for its tenth season. “And to keep it fresh and creative and not do the same thing over and over and over… They’re just terribly creative people, Greg Nicotero and his team. I would have given up!”

During the SDCC panel, a four-minute trailer debuted for Season 10, which gave a brief glimpse of what’s in store when it comes to walkers.

“There’s a moment where Jerry and Ezekiel are pushing this door down,” says Cooper Andrews who plays Jerry in the series. “Inside this boat, there’s actually some really cool-looking water walkers … They’re very wet. Like the ‘well zombie’ but mobile. These are a lot more mobile and they [are carrying] around 400lbs of water weight.”

The ‘well zombie’ from Season 2, if you remember, looked tubby and relatively well preserved as we watched it claw at Glenn while he dangled from a rope. The walkers Andrews describes are a rung up from that memorable specimen, with Yumiko actress Eleanor Matsuura, who made her debut last season, describing them as similarly “bloated.”

Nadia Hilker, who plays another of the show’s newcomers, Magna, talks of them being characterized by seaweed and white flesh.

“That opening shot [in the trailer] where [the walker] is attached to the driftwood and it looks like it’s part of the driftwood? That’s really cool,” says Matsuura.

Nicotero, meanwhile, says that this season has seen the practical effects team develop a revolutionary new method for creating a special kind of effect on walker skin.

“We developed this technique for translucent skin so you can actually see through the skin to the bone and the musculature,” he says.

Given the latest threat lurking in the new season, fans might be surprised to hear the team working so hard on perfecting the Walkers. During our chat, Nicotero teases that there’s a huge focus on the Whisperers this season, a group of survivors introduced last season who wear the skin of the dead.

“The nice thing is now that we’ve expanded our palette with the Whisperers … we got to add a whole new mystique by knowing that these characters cut the skins off zombies and stitch [them] together,” says Nicotero. “So … we’ve really focused this season more on developing those characters. Obviously, they walk amongst the dead so they travel along amongst the herds of zombies, but we’re always constantly pushing stuff. And the writers put really fun gags in there that we get to… I mean I got to skin a zombie the other day and it was super-fun.”

Nicotero directs four episodes of the new season, and credits showrunner Angela Kang with allowing him the liberty to experiment.

“I shot one shot – it ended up not being in the episode – where there was an entire zombie kill from a drone, like, 300 feet in the air as one of the characters runs across a bridge,” he says. “And I sent the shot to Angela, and I’m like: ‘We’ve never done something like this before.’ Because we always try to switch it up. You don’t want to see the same thing over and over again and it was just something to sort of have a gods’ point of view of somebody killing zombies … so Angela really gives us that freedom to explore.”

The Exploding Head That Was “Too Much”

Freedom Nicotero didn’t have under previous showrunner, Scott Gimple, perhaps? Nicotero cites a couple of walker effects that, under Gimple’s tenure, didn’t get the go-ahead.

“There was a gag where we had a zombie’s face … that zombie got pushed up against the fence at the prison, and we made a face that had the markings on it and we shoved the head through. It was like Playdoh – and we hit the blood pump and, like, five gallons of blood shot out,” he says. “And Scott was like: ‘Too much’. He put it in the gag reel but it didn’t make the episode. I was like, ‘Really? Too much?’ I loved it … and then there was one gag in [Siddiq actor] Avi’s first scene, when Avi was introduced, and he and Carl are fighting zombies, and the script says: ‘…and he rams the zombie’s head into a tree’. We made a head and we filled it with blood and guts and we literally piledrived it, smashed it into the tree, and it exploded. And Scott was like, [‘No’].”

Siddiq actor Avi Nash doesn’t mention this incident, but he does discuss some of Season 10’s scariest walkers.

“There were many [zombies] that we thought were part of a set, that were not part of a set,” he says. “And when you see that scene … it’s like an image out of a war, out of a battlefield, and that was the scary part. In a battlefield, you think most of those [bodies] are corpses — and they’re not extras, they’re like props, they’re foam bodies. And there were people on set that day, and we were sort of walking about in the exhaustion of battle…”

Matsuura interjects, “And sometimes you’d step on them.”

“You didn’t know who was foam and who was human,” says Nash.

Norman Reedus, who has played Daryl Dixon from the show’s very beginnings, says he constantly notices walker evolution as the series progresses.

“They almost looked really healthy in the beginning,” he says. “Ten years ago, they almost looked like healthy dead bodies compared to what we have now. There’s fire, so there’s charred zombies — you see them slowly deteriorate in a very subtle way … back at Season 1 zombies, they looked like they could be on a cereal box.”

“They’re getting more emaciated, and disgusting; more decomposed,” adds Negan actor Jeffrey Dean Morgan. “I don’t know if I’m allowed to say it but I’m going to say one thing: I worked with a zombie this year that was mouldy and it was the coolest thing I’ve ever seen in my life.”

So if they’re continuously deterioriating, there must come a point where their life cycle ends?

“Well, that’s the interesting thing; who knows?” says Morgan. “They’re not eating, if they’re not being able [to eat], which is why they’re deteriorating. They’re running out of humans to ear, or animals, or whatever. I wonder if they could just starve them to death.”

With Robert Kirkman’s comic books recently coming to a sudden end, thoughts are turning once again to the end of the series – could Jeffrey Dean Morgan be onto something here?

Season 10 of The Walking Dead premieres on October 6.