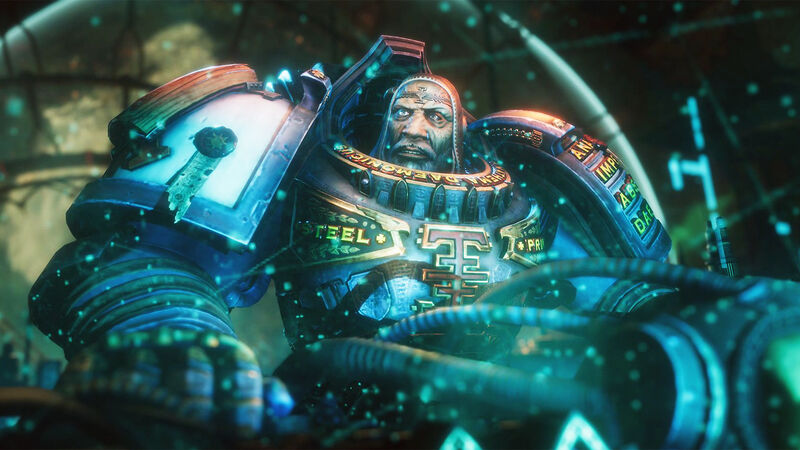 Warhammer 40,000: Chaos Gate – Daemonhunters is a top-down XCOM-style turn-based tactical RPG, a descriptor that is somehow shorter than the game’s title. Then again, Warhammer isn’t a franchise known for its subtlety, and this newest entry is no exception.

Players lead a strike force of Grey Knights, a secret chapter of space marines who defend the Imperium against the Chaos Gods (again, subtlety has yet to be invented in this universe). A mysterious new corruption called the Bloom is spreading quickly across the galaxy, and it’s up to you and your team of roided-out Knights to put a stop to it before it claims the lives of billions.

You’ll charge across blood-soaked battlefields, sprinting from chest-high wall to chest-high wall to face off against hordes of enemies while the camera quick-zooms up close to let you drink in the kills in indulgent slow-mo. If games like XCOM, Gears Tactics, and (of course) Warhammer 40K: Mechanicus are about your speed, Daemonhunters takes that core gameplay and puts a fresh coat of red paint on it. That is paint, right?

But if you’re new to the game or even the genre, all these ginormous weapons and ginormous-er men swinging them around might be a bit overwhelming. Here are six things to keep in mind when you jump into the dismal world of Warhammer with Daemonhunters.

Every conversation in Daemonhunters will entail at least a dozen references to the larger world of Warhammer. To the uninitiated, all this talk of Machine Spirits, Auguriums, and Black Legions might leave you reeling. My advice? Don’t get too caught up in it. Sure, you can scour the Warhammer Fandom page to develop an encyclopedic knowledge of the source material—and I encourage you to do so!—but for your first playthrough, getting too mired in the lore will probably just end up taking the wind out of your sails.

Focus on the fast-paced action and oversized-everything. A few important vocab terms like the Imperium, the Inquisition, and the Bloom will start to settle into your understanding by sheer osmosis, but you’ll get plenty out of the story without knowing that the Tech-priests of the Adeptus Mechanicus follow the Fabricator-General of Mars but also consider the God-Emperor of Mankind to be the Omnissiah which is the physical embodiment of…yeah, trust me, you’re gonna want to focus on the big explosions for the time being. Loremasters will have plenty to chew on, while more casual fans can still enjoy the big dumb action for what it is.

Try Not to Get Too Attached

You’ll be recruiting a lot of Grey Knights along your spacefaring journey, and not all of them are going to make it out alive. Then again, they’re not exactly the most three-dimensional characters around: all their characterization comes from a few terse combat acknowledgments. All the Knights are essentially big muscled masses in various states of creatine rage and encased in three-ton cocoons of power armor. They’re about as interchangeable a cast as you could ask for. You can even swap out their appearances, voices, and names at will, so if your favorite halberd-wielding himbo happens to eat it in a fight against the Bloomspawn, you can essentially rebuild him out of the next guy’s body, like when that one guy’s twin shows up to replace him in Beerfest.

And if you really want to keep your OG squad intact, there’s always Resilience, an upgradeable stat that allows Knights to survive incapacitation…until it runs out. At that point, their remains are shipped back to Titan, and you get to write a letter to the family about how their beloved Aldrand got killed six times in a row before he, like, died died. They’ll appreciate knowing that his untimely demise involved so much exquisite torment at the hands of the Chaos Gods. I guess the Imperium doesn’t really hand out medical discharges anymore.

If you want to cut back on casualties, remember not to keep anyone on the bench for too long. Wounded marines will take some time to recuperate, but you have a barracks full of replacements to sub in for them. You’ll want to keep those reserve units leveled up too, or else they’ll be walking into a meat grinder on any of the harder missions. Relying too much on a core group of four Knights is a sure way to find yourself Frankensteining together Olric Buttface 2.0 out of someone else’s body parts.

Note that while powerleveling a core group of Knights and investing in healing technologies to make sure they never quite reach critical status is possible, it’s a highly involved strategy that more seasoned players might find an appealing challenge. Noobs, on the other hand, could end up being frustrated by the steep learning curve required to reach that level of tactical know-how, so as a general rule for beginners, more really is more.

Tempting as it might be to make every Grey Knight a jack of all trades, specialization is key in Daemonhunters. You start off the game with four available classes: Justicar (a damage-absorbing tank with armor and AP buffs),  Apothecary (a healer who makes use of psychic attacks and servo skull upgrades), Interceptor (a teleporter who can outflank enemies to get around their pesky Overwatch stances), and Purgator (a ranged-focus support class). There’s a lot of overlap between different classes’ skills, but you’ll need to make use of all of them to succeed against the Chaos hordes. It’ll take some trial and error–and a few dead Knights, regrettably–but you’ll quickly learn which strategies work best for you.

In general, you’ll want to leave your Justicars up front to sponge up most of the damage while your Interceptors close the gap to dish out some crucial melee damage. With your Purgators laying down suppressing fire and your Apothecaries keeping everyone more or less alive, you’ll have a decent shot in most engagements. None of these classes are totally useless at any one facet of combat, but playing to each one’s greatest strengths will make the difference between a clean win and a crushing defeat. And that’s to say nothing of the additional classes you’ll unlock as the story progresses.

Let’s Get in Formation

Team comp is vital to success, but the most fundamental part of Daemonhunters’ combat system is still in its positioning. It’s got XCOM’s fingerprints all over it, so you know cover management is key. If you’re standing out in the open, you’re probably doing something wrong. The game uses a simple cover-based system where full-cover gives complete protection from damage, half-cover negates partial damage, and non-cover offers nothing but the bitter embrace of death. The Overwatch ability, which any class can access, creates a cone of awareness in front of your Knight. They’ll automatically fire at and damage any enemy who steps through that cone for the next turn, which is quite the deterrent against opponents rushing from cover to cover to get a good angle on you. You can even overlap the cones with multiple Knights to create a formidable killzone.

Unfortunately, your enemies have the same ability, and they really like to use it. More than once I found my Justicars trapped between three or more Overwatch cones and had to make the choice between standing absolutely still (only movement triggers damage from Overwatch, because the Warhammer universe operates on T-rex rules) or eating a ton of damage in order to avoid taking even more on the next turn. Strategically placing your squad to discourage–or sometimes force–a head-on assault is a staple of the genre, and Daemonhunters is no exception.

A common strategy whenever you find yourself out of combat and moving onto the next zone with limited visibility is to move your backmost troops up first. This way if you do encounter enemies you can position those troops (who typically have fewer action points and rely more on ranged attacks) accordingly, while your frontmost Knights will have action points to spare and can run up on the newcomers before they get a chance to organize themselves. It’s just a nifty heuristic for maximizing your options in the event of an ambush.

The battlefield isn’t the only place where your decision-making skills will be put to the test. The game’s overworld spans the entire Milky Way galaxy, with missions becoming available in different star systems. Investing in upgrades for your ship, the Baleful Edict, will allow you to do things like travel faster, give your marines an XP boost, and generate Servitors, which can be used to purchase even more upgrades. You’ll eventually be able to employ the use of Prognosticars to help extend the amount of time a mission is available. You can even attack or send boarding parties onto enemy ships to commandeer precious resources. Careful, though: your ship is vulnerable to damage as well, so you’ll have to manage both its defensive and offensive capabilities on top of jet-setting around the galaxy. It’s a whole other level of resource management outside of combat, but the two systems inform each other substantially, so you’ve got to invest just as much time and thought into both of them. The choices you make for your ship will affect your game every bit as much as the weapons and armor with which you outfit your Knights.

It’s easy to settle into a leisurely pace when there aren’t any enemies on screen, but these can be some of the most vital moments in your campaign. Roaming patrols of goons will often turn  a languid jaunt around the map into a devastating ambush, and the ever-present threat of the Bloom–the source of the game’s primary conflict–will constantly generate new debuffs and obstacles every few turns. Even the most modest of the Bloom’s effects have the potential to compound into a truly harrowing experience if you aren’t expedient about finishing the level. Things get especially hectic when you agree to commit to a Glorious Deed, a special challenge condition which, if fulfilled, can yield extra requisition rewards. And that’s a big “if,” since the Deeds tend to be a bit brutal, like forcing you to play without grenades or Willpower ability. In other words, no need to poke around the map looking for hidden treasure; apart from harvesting Seeds from enemies for upgrades, all your rewards will be hand-delivered to you at the end of the level. Time is of the essence in Daemonhunters, so don’t dilly-dally too much.

With all that in mind, you should be prepared for your first foray into the Chaos Gate. At least, as prepared as you can be. The loss of cherished characters is part and parcel with the tactical RPG genre–although none of them quite reach the level of graphic ultraviolence Warhammer has turned into its trademark. Still, losing Knights you’ve come to care about really hurts. But hey, if it’s any consolation, it hurts them a lot worse.

Now get out there, Commander. We Are The Hammer, Blood for the Blood God, etc.!