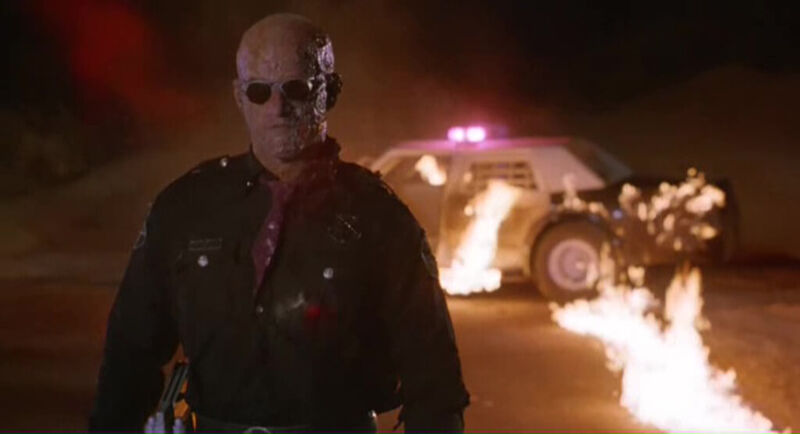 Part of the joy of being a fan is finding odd and obscure gems that you end up falling in love with. For every Star Wars, there is a Starcrash. For every Batman, there is a Condorman. At Fandom, we like hunting for offbeat and off-the-wall films and TV shows that might become your own secret treasures. Strap yourself in and expect the unexpected, because this week’s Weird Watch is the B-horror comedy film Highway to Hell. (Last week: Southland Tales)

Highway to Hell is the sort of movie one discovers only under a specific set of circumstances. It’s a movie seemingly tailor-made to be seen by bleary-eyed night owls and insomniacs to watch with bewildered glee. It follows a young couple going Las Vegas to elope in the middle of the night. The Drop Dead Fred director Ate de Jong filmed Highway to Hell in 1988 but it wasn’t released until 1991.

Stopping at a diner, groom-to-be, Charlie (Chad Lowe) is convinced that a motorcycle cop at the restaurant is after them. His girlfriend Rachel (original Buffy the Vampire Slayer Kristy Swanson) tells him to test his theory. So, he pulls off onto a side road to see if anyone is following them. After being certain that the officer’s presence was coincidence, Charlie notices that the road they’re on is a shorter route to Vegas. They stop at a run-down gas station where the attendant pleads with them to go back or wait until morning. The couple are undeterred and head off on their own.

A large police office named Sergent Bedlam pulls Charlie and Rachel over. The officer has a souped-up car, words etched into his face, and handcuffs made from still-living severed hands. He grabs Rachel and disappears into thin air. Charlie returns to the gas station where the attendant explains that the man who took Rachel is The Hell Cop and he’s taking Rachel to Hell. Charlie’s only chance is to pursue Hell Cop and rescue Rachel before sunrise or she’ll be trapped in Hell forever. The attendant gives Charlie an old hot rod and a magical shotgun and sends him on his way to rescue his bride-to-be.

Now, a seasoned movie aficionado may think they know what’s going to happen next, but they’re wrong. Rather than some twisted nightmare realm, Charlie emerges into a sunny desert filled with goofy set-pieces referencing Greek mythology, the work of Dante Alighieri, and common idioms about Hell (like the road to it being paved with good intentions.)

What follows feels like a more adult-themed Labyrinth with weird mash-ups of Mel Brooks, George Miller, and Terry Gilliam. There’s a diner filled with zombie cops waiting for eternity for a belligerent waitress who keeps talking to serve them. We’ve got a litter crew dumping trash on the roadside rather than picking it up. There’s a gang of sword-wielding bikers led by a failed antichrist. Then there’s the bar where history’s greatest monsters party and gamble (this includes Ben Stiller and sister Amy as Atilla the Hun and Cleopatra and Gilbert Gottfried as Adolf Hitler), a Ray Harryhausen-esque Cerberus, and more.

At times Highway to Hell is a screwball comedy, at time it’s an arch horror movie, often it’s an epic fantasy film but watching it always inspires a goofy grin and a feeling of “how did this get made?” The most recent soulmate to this movie is 2011’s Drive Angry, though even it isn’t as much of a bizarre crazy quilt of a film. There are shades of everything from The Road Warrior to Time Bandits in the film and it is a beauty to behold.

Chad Lowe plays his role with a twitchy resolve that comes across as endearing rather than pathetic. Kristy Swanson makes the most of a role that largely involves her trying to escape a pair of handcuffs. Patrick Bergin also gives an understated performance as a kindly mechanic who helps Charlie and totally isn’t Satan or anything.

There are two phases to a human being’s life: before watching Highway to Hell and after.  Those who haven’t entered that second phase are highly advised to do so very soon.