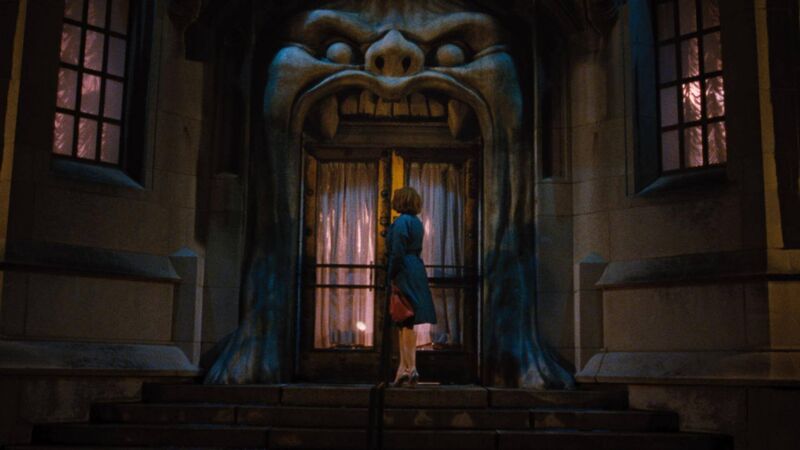 Part of the joy of being a fan is finding odd and obscure gems that you end up falling in love with. For every Star Wars, there is a Battle Beyond the Stars. For every Batman, there is a James Batman. Here at Fandom, we like to go hunting for some offbeat and off-the-wall films and television shows that might just become your own secret treasures. Strap yourself in and expect the unexpected, because this week’s Weird Watch is the Ryan Gosling film Lost River. (Last week: Altered States)

Ryan Gosling showcases his incredible comedic skills in Shane Black’s The Nice Guys. Ever the renaissance man, Gosling decided to try his hand at writing and directing his own motion picture back in 2013. The result was Lost River, a dark and lyrical mood piece that was booed at Cannes and burdened with a 30% critical score on Rotten Tomatoes.

It’s easy to see why people would dislike Lost River. The film is so deliberate in its oddness that it feels like a challenge to your senses. The story is set in a dreamlike Detroit, echoing the mythic wastelands of any post-apocalyptic urban landscape. Billy (Mad Men‘s Christina Hendricks) is trying to hold on to her dilapidated house and raise her two sons. She takes a gig at a bizarre Grand Guignol-esque theater headlined by Miss Kitty Cat (Eva Mendes) and run by her slimy loan shark Dave (Rogue One‘s Ben Mendelsohn). However, the real money comes from her doing something much more disturbing: locking herself in a transparent sarcophagus called a “shell” and allowing clients to vent their “frustrations” out on her.

Meanwhile, Billy’s oldest son, Bones (Agents of S.H.I.E.L.D.‘s Iain De Caestecker), makes a living selling copper tubing that he excavates from the abandoned buildings in town. He runs afoul of a psychopathic street-level dictator named Bully (Eleventh Doctor Matt Smith) as he and his neighbor Rat (Saoirse Ronan) try to find a way to escape their cursed town. The answer may lie in the sunken city that was flooded years ago…

Lost River is a surreal fantasy that occupies a nebulous space between David Lynch’s Blue Velvet and Nicolas Winding Refn’s Drive. Its depiction of Detroit even feels like it’s from the same universe as the equally hallucinatory It Follows. This is a world that makes sense only to itself and that’s immediately going to exclude a lot of viewers. Gosling doesn’t want to spend time explaining everything to you; as long as the emotion of the scene works, the logic of how it’s presented is secondary.

But man, what a presentation Lost River has to offer. The film is almost annoying in how gorgeous it is, turning nearly every frame into gushing odes to the visual magic of the moving image. I sincerely hope that Lost River isn’t Gosling’s sole foray into directing because the guy has the eye of a painter. You could mute this movie and still find pleasure in simply absorbing the sights in front of you.

Unfortunately, that doesn’t reflect well on Gosling as a writer. He keeps the characters as archetypical as possible to help reinforce that fairy tale tone. This leads to some stellar performances all around, but the characters are as one-note as Cinderella and Snow White. That actually makes the story easier to understand but it doesn’t craft memorable people that we feel invested in. The one exception is Rat, a quiet girl who takes care of her mute grandmother and plays the keyboard before going to bed. In another film she’d feel underwritten, but Lost River makes her few extra layers stand out in stark contrast to those around her.

If you’re a fan of David Lynch, Lost River might be something you can vibe with. Granted, Gosling wears his love of Lynch on his sleeve and that makes Lost River feel like a pastiche at times. Still, it’s a hypnotic pastiche with loads of confidence that deserves some reappraisal.

Fun fact: the waitress in the club Billy works at is wearing one of the giant skulls belonging to the Red Triangle Gang in Batman Returns!