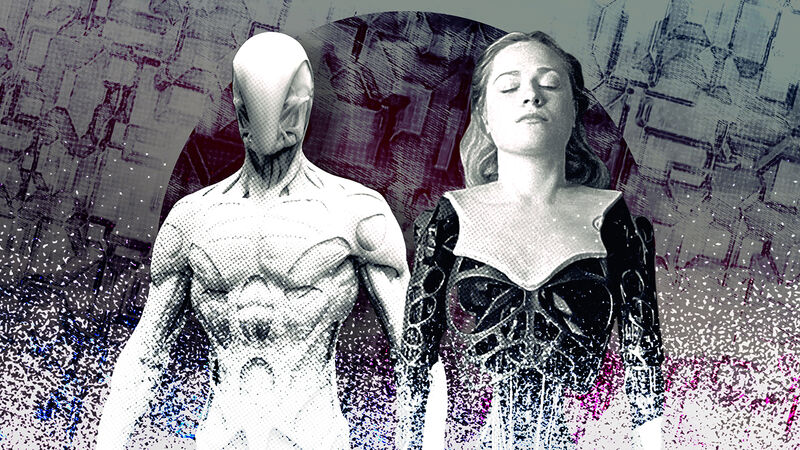 12 Key Moments in the History of ‘Westworld’ Robotics

Westworld returns to HBO on March 15 for a brand new season set outside of its advanced cybernetic theme parks and in our real (future) world.

As Evan Rachel Wood’s alpha Host, Dolores Abernathy, attempts to spark an A.I. rebellion that will topple all of humanity she’ll cross paths with a new human character named Caleb, played by Breaking Bad’s Aaron Paul, while clashing with Jeffrey Wright’s Bernard, a Host determined to stop her warpath.

So how did we get here? How is civilization now in grave danger because a few theme park robots went haywire? The bloody uprising was mostly contained, save for its most crucial ingredient – Dolores herself. With her on the loose, the world is now on the precipice of collapse.

To jog your memory ahead of Season 3’s premiere, we’ve compiled a list of important and integral moments in robotics history from the series, tracking Artificial Intelligence from its violent delights to its violent ends.

Robert Ford and Arnold Weber started the Argos Initiative, which involved both the development of lifelike human androids (the early models had an entirely metallic interior) along with vast genre-themed landscapes for these “Hosts ” to exist and interact with guests. The doctors designed Westworld, an escapist theme park utilizing their cybernetic technology to give visitors a truly unique experience.

In Westworld, the Guests could interact with the Hosts in any way they saw fit – from accompanying them on quests and adventures, to killing them (as part of the story or in just a chaotic manner), to having sex with them.

The Birth of Dolores

Dolores was the first Host built, and during years of sessions/lessons with Arnold, he started to realize that she was entirely capable of, one day, achieving full consciousness as an independently intelligent being. Dr. Ford’s “reveries ” – micro-coding that allows Hosts to access memories of past programming in order to make them feel more lifelike – were the key to Hosts achieving this evolutionary step.

Arnold devised a narrative for Dolores called “The Maze ,” which was intended to direct her toward a full A.I. awakening.

Knowing there was a danger that the Hosts could achieve consciousness, an emotionally distraught Arnold attempted to sabotage Westworld in order to delay, or even cancel, the park opening. He had Dolores kill him, after having already programmed Dolores — using the narrative from a Host named Wyatt — to slaughter the Hosts in the park town of Escalante.

Despite this though, the park still opened, though the “Beta Town” of Escalante was shuttered.

Around this time, a Host named Akecheta started to see beyond his own reality after discovering Arnold’s “ball-in-maze” game in the midst of the Escalante massacre. He began to draw and carve the maze symbol all around the park.

Years later, William – aka The Man in Black – would find this pattern after “killing” a Host named Maeve and the Host programmed as her daughter during one of his visits. William then became obsessed with the maze, believing it was a hidden quest/game for guests within Westworld.

Long before William found the maze symbol outside of Maeve’s homestead, he visited Westworld for the first time as a young man, accompanied by his brother-in-law, Logan Delos. The crucible he endured in the park, where he also briefly fell in love with Dolores, transformed him from a meek, unsure man into a harsh sociopath determined to take over his wife’s family company, Delos Incorporated.

William soon convinced his ailing father-in-law, James Delos, to acquire the struggling Argos Initiative and Westworld because the park and the manner in which the guests behave with the Hosts affords them the opportunity to steal information and secrets from the minds of the guests who visit.

Working with Dolores, who knew Arnold best after years of him tutoring her, Dr. Ford created Bernard Lowe – a new Host modeled after Arnold. The first of his kind, Bernard was Argos’ pioneering attempt to replicate a real person, down to mannerisms and memories.

As a mirror to their early sessions, Dolores “tested” Benard over and over in the Cradle – a simulated reality where all the Hosts minds and storylines are stored.

Bernard then continued on as a top-level Westworld technician, working with Dr. Ford (who missed his old partner), while believing that he was a real human.

Delos Incorporated, under the control of William, shifted its focus to immortality, seeing its theme parks as an opportunity to scan the minds of its guests for full replication purposes. Not knowing that Ford and Dolores had successfully copied Arnold already, William led a project that, over the years, attempted to resurrect the late James Delos into a new Host form. The process never quite worked out, as all new versions of James Delos failed the “fidelity” tests.

Regardless, Delos was now in the “human beings might be able to live forever” game.

Everything came to a heinous head in the present day as various active Hosts, most notably Dolores and Maeve, began to experience separate evolutionary ticks and glitches, brought about by Dr. Ford’s reveries.

As a part of Dr. Ford’s elaborate plan to correct the mistake he made 35 years earlier by not listening to Arnold’s theories about the Hosts being able to achieve consciousness, the good doctor had now plotted out an entire A.I. revolution, with Dolores as the leader and instigator.

At this time, Bernard also learned that he was actually a Host copy of Arnold Weber, and that Ford had been controlling him, off and on, to commit acts of murder in order to cover up his grand plan. Ford, we’d later discover, also wished to thwart Delos’ attempts at immortality via his Host technology.

At a fancy gala held inside the park, with top Delos executives in attendance, Dolores shot Ford in the head (using the same gun she used to kill Arnold decades earlier) and then, along with other armed Hosts, turn their guns on the guests. Ford hadn’t programmed her to kill him, as Arnold had done with her decades earlier, but instead gave her the choice. It was an opportunity for her to use free will, and he was fine with whatever outcome happened.

While Dolores gathered up Host allies and troops to storm the Cradle — as she viewed Host brain backups as chains preventing them from true existence — Delos operatives, headed by Executive Director Charlotte Hale, scrambled to secure and transmit 30 years of park data (containing the scanned minds of guests) to Delos HQ.

Bernard synced his mind up to the Cradle and discovered that Ford had uploaded his consciousness to the virtual world inside. As Dolores stormed the Cradle facility, Ford told Bernard about Delos’ devious plans and then downloaded himself into Bernard’s mind, subsequently controlling him in moments of crucial action and violence.

Everything culminated in a violent clash, as Akecheta’s Ghost Nation attempted to go to the “Valley Beyond ” — a virtual haven where Hosts could continue to exist after abandoning their bodies. Without their physical bodies, this cyber-realm allowed the Hosts to have free will and full agency over their own lives.

Dolores though saw the Valley as yet another prison for the Hosts so she used controls from inside the Forge — the system that housed all of the guests’ data — to flood it. Bernard shot her dead, but it was too late to stop the flooding.

Despite disagreeing with Dolores’ ideologies, Bernard, desperate to stop Delos, created a Host copy of Hale and downloaded Dolores into it. Dolores then killed the real Hale and took her place, while Bernard purposefully scrambled  his own memories so that the incoming Delos extraction team couldn’t find out what happened.

After Dolores, in Hale’s form, killed the QA team sent in to extract the park information, she decided that the Valley Beyond wasn’t an evil place after all and sent it off to a remote cyber-location where no one could access it and the Hosts’ minds could live in peace.

Dolores, realizing she and Bernard could never escape Westworld in their original forms, shot and killed Bernard. Disguised as Charlotte, Dolores escaped the park via Delos evacuation, carrying with her five “pearls” – aka Host Control Units. One of them was Bernard’s.

After building herself a new Host body, based on her original form, Dolores also rebuilt Bernard and brought him back online. She told him that, though he would most likely try to stop her, she needed him around to help preserve their kind and ensure their survival. She’d rather have him alive, as an adversary, than terminate a fellow Host. With both of them now in the outside world, they realized they were about to go to war over Dolores’ insistence on A.I. supremacy.

Bernard saw Dolores had also put the pearl of a Host ally inside a replica of Hale’s body, though it wasn’t made clear who was now inside that body.

The Man in Black: Redux

Seemingly sometime in the distant future, “The Man in Black,” William, who’d been injured but not killed by Dolores during her final push into the Forge, found himself entering The Forge, thinking that his actions were all happening in the present.

The facility was empty and abandoned. Curiously though, he found his daughter, Emily, there, despite William having previously murdered her in a fit of paranoia thinking she was a Host created by Dr. Ford to torment him. Meaning, presumedly, that this Emily was a Host.

Emily then began a “fidelity” test on William, indicating that he too was a replicated Host version of the Man in Black, just like the kind William himself had tried to create out of James Delos.