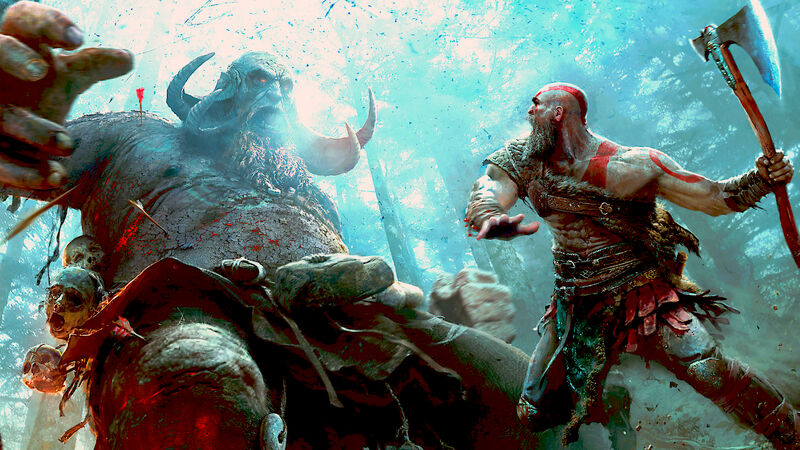 What Are Kratos’ Powers?

A lot has changed since Kratos’ last outing.

Where once Kratos unleashed his fury across the peaks of Mount Olympus, now gaming’s most beloved anti-hero finds himself laying low in a strange new land. Since the bloody events of God Of War 3, the ghost of Sparta has raised a new family, stepping away from the realm of the ancient Greeks and instead, now calls the frost-coated land of the Norse his home.

Yet, it’s not just Kratos’ surroundings that have changed – his powers have too. Thanks to his new-found peaceful existence (and a new style of gameplay, obviously) Kratos is no longer capable of the same feats he once was.

Here’s a look at what the newly aged Kratos can do.

When he finds himself in the Nordic Realm, Kratos has seemingly been stripped of all the weapons he gathered during his quest of vengeance, with his once legendary arms destroyed during a tense battle with Zeus.

Unsurprisingly though, he doesn’t waste much time getting some new killsticks to play with. Kratos now wields a magical throwing axe called Leviathan. In a nice coincidence, the God Of War happened upon this rare find whilst wandering in the same woods where he met his soon to be wife Faye. This is the same Faye who goes on to become the mother of Kratos’ future son, Atreus.

Unlike the fire-imbued Blades Of Chaos, Kratos’ new axe is powered by ice magic. Swinging its blade creates light blue energy waves, which can be charged up, and hitting the ground freezes enemies close with impact. Is this a sign that his fiery temper has cooled a bit over time?

Kratos also throws the axe directly towards opponents in battle and like a magic-powered boomerang, he can return it back to his hand by raising said hand in the air. Outside of combat, this cool new axe can be very handy when it comes to solving puzzles and opening up new paths in the environment.

Unlike the headstrong, rage-fuelled Kratos of old, our hero now takes a more cautious approach to combat. He also wields a golden shield he uses both offensively and defensively. He wears it like a brace for his left forearm but it instantly retracts to its full form at will.

He is shown to pair this with his axe in battle. He can infuse the magical abilities of his axe into the shield, allowing for more explosive and devastating combos.

Ruler of the Runic

Where in previous games Kratos possessed passive powers that would allow him to drain health from enemies, this time around, most of the God Of War’s new abilities are a result of the equipment he wields.

Thanks to runes embedded in the Leviathan axe, Kratos now has two different magical attacks at his disposal. Known as light and heavy runic attacks respectively, these new abilities can wreak magical mayhem on unsuspecting foes.

Triggered by holding L1 and pressing R1 or R2, Kratos will have the option of equipping a multitude of different Runic Attacks, each bringing their own unique effects and cooldowns.

Thanks to the new game’s focus on RPG-elements, each Runic attack can be upgraded as you unlock XP on your journey and grow as a warrior.

They’re effective all their own, but a well-placed Runic Attack can make a powerful combo even more devastating and quickly turn the tide of any tough encounter, giving you an upper hand when your chances of survival seem low.

The Rage of Sparta has always flown through Kratos’ veins. Now after years of trying to suppress that rage and be a responsible parent, it’s deadlier than ever. In Kratos’ latest adventure, activating this ability makes Kratos’ seeing red grant him near-invulnerability for a brief period.

As you progress through Kratos’ and Atreus’ journey,  you can unlock new Spartan Rage abilities, allowing Kratos to cause even more destruction when you unleash his festering rage.