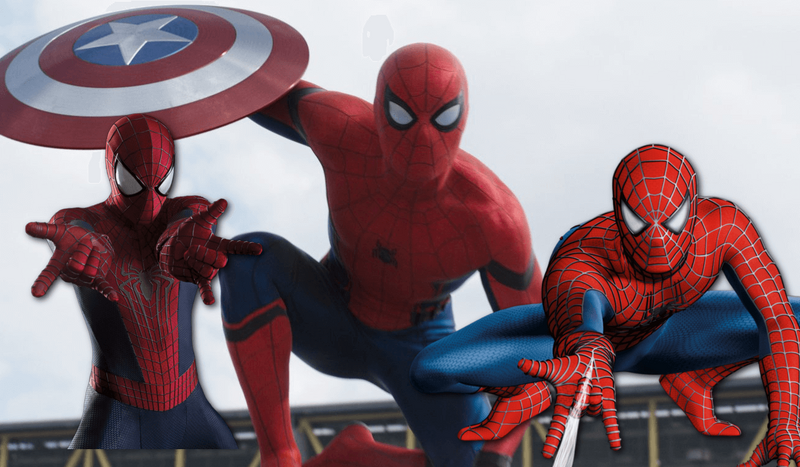 Who Played the Best Spider-Man in Film History?

Out of all the folks who’ve played him on the big screen which actor has played the best movie version of Spider-Man? After Tobey Maguire and Andrew Garfield both got ample time as the wall-crawler, there’s a new kid on the block: Tom Holland. After a stellar debut in Captain America: Civil War, Tom will be putting on the web shooters as the newest version of the titular character in Spider-Man: Homecoming, coming to theaters July 7th, 2017. As filming has already begun (we’ve got the pics to prove it), one might find themselves comparing both Maguire’s and Garfield’s portrayals of Peter Parker and wondering how Tom Holland will handle it in the next film.

From the moment Peter Benjamin Parker swung into our hearts as Spider-Man in Amazing Fantasy #15, he has remained a universally loved and internationally famous superhero. Over the years, the character has graced television and video games as well, and — most prominently — cinema. While the web-slinger made appearances in movies such as E. W. Swackhamer’s eponymous TV movie in 1977 and fan-created shorts like Dan Poole’s The Green Goblin’s Last Stand in 1992, Spider-Man’s most celebrated appearances have been in Sam Raimi’s Spider-Man trilogy from 2002 to 2007 and Marc Webb’s two-movie adaptation, The Amazing Spider-Man. Let’s take a closer look at the pros and cons of each Spider-Man to date.

Maguire’s Peter Parker is, well, a hapless dork. Before his transformation via spider bite, he is completely unable to take on any of his battles alone and is ridiculed endlessly by his classmates. His conversion into a web-wielding superhero conveys a visible amount of internal struggle as he comes to cope with the guilt he feels due to Uncle Ben’s death and, throughout the films, it is evident that he is not completely sure of his role as Spider-Man, especially against a threat like The Green Goblin. This aspect of his portrayal is down to earth and refreshingly similar to the struggles Peter faces in the source material.

But even though Maguire plays the geeky aspect of Parker well, we never really see how smart he is, at least not to the level of science genius found in the comics. One of the reasons for this is because we never see him attempting to make his web-shooters due to the whole “organic web-shooters” cop-out, although that is less Maguire’s fault, and more so the film’s producers.

Moving away from that side of his character, Peter Parker is supposed to be funny and snarky, especially when he’s in costume, but Maguire doesn’t seem to get Spidey’s sense of humor. In fact, his dialogue in battle can even verge into cringe-worthy and his portrayal tends to come off as inadvertently goofy rather than actually funny. A perfect example of this is that groan-worthy portrayal of a symbiote-bonded Peter Parker. I’m sure I don’t need to remind you of the two-minute montage of him asking Ursula Ditkovich to bake him more cookies and get him a glass of milk, flirting with Betty Brant, and dancing down the streets of New York, do I? Yeah, it’s hard to forget.

Garfield’s Peter Parker/Spider-Man definitely has a lot of heart, and it is evident that Garfield had a lot of fun with the role. Andrew brings a sense of charisma and fun to his Spider-Man while still conveying the essence of the character’s intelligence and eccentricity. His quips and sarcasm add humor and color to the movie that can make many moments less somber than its predecessors. The montage of him making his own web-shooters in The Amazing Spider-Man not only brings in comedic themes but also really shows the audience just how smart Peter Parker is.

But, is Garfield’s depiction of Peter Parker a bit too much? While the core of Peter Parker is there, his character isn’t as rich and nuanced as would necessarily be expected. Yes, Peter struggles with his uncle’s death and his new powers, but it’s never to the extent that would necessarily be expected. He moves on too fast from the guilt inherent in Spidey’s existence. Garfield’s Peter Parker almost appears to be too sure of his role as a superhero, and even his moments of doubt pass by a little too fast.

Admittedly, Holland’s portrayal of Peter Parker/Spider-Man is currently limited to a few scenes of Captain America: Civil War, but it is very promising nonetheless. Unlike previous actors, we see Peter Parker after having been Spider-Man for six months, not wasting our time by once again explaining Parker’s tragic origin story. Nonetheless, the struggle that Peter has with his powers is still there. There are two great pieces of dialogue in Civil War that perfectly depict the essence of Peter’s character: “Because… because, I’ve been me my whole life, and I’ve had these powers for six months. I read books, I build computers, and I would love to play football, but I couldn’t then so I shouldn’t be able to now…” and “When you can do the things that I can, but you don’t, and then the bad things happen? They happen because of you.”

The first quote is a serious slap in the face to the scene from The Amazing Spider-Man in which Andrew Garfield dents a goal post with a football; it tells us that Holland’s Peter Parker genuinely understands that even with his new powers, he still has to remain true to himself. The second quote also works to establish who Peter Parker is at his core without using the same old “With great power comes great responsibility” rhetoric. With these sentiments aside, Holland’s Spider-Man proves to be pretty close to his comic book character in battle; he balances his great fighting skills with a great sense of humor. There are too many great lines from Civil War to name all Spider-Man’s funniest quips, but I’m sure we all had a good laugh at Peter’s reference to The Empire Strikes Back.

After all that, the question remains: Which of these actors did it best? Of course, we haven’t seen Holland’s Spider-Man across an entire film, so we can’t make an entirely fair judgment in that case. Even when Spider-Man: Homecoming comes out, there will still be differing opinions on which Spider-Man is the best one, though many are currently leaning towards Holland’s version of Peter. But let’s not be too quick to hand Tom the top honor just yet. After all, taking on such a well-loved role means that one holds great power, and with it comes…