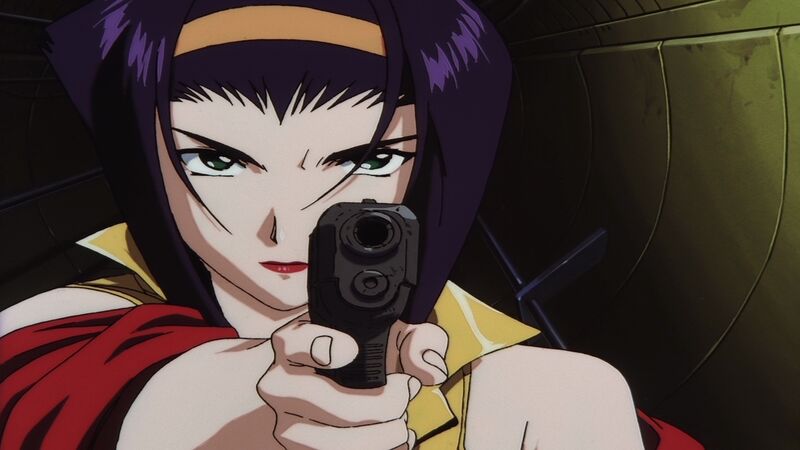 Many consider Cowboy Bebop’s English dub to be one of the best in the history of anime. As the first anime to be broadcast on Adult Swim, for many, the English voice actors are all they know. So, to celebrate Cowboy Bebop’s 20th anniversary, FANDOM sat down with voice actor Wendee Lee to discuss the iconic anime, Faye Valentine’s all-around badassery, and the art of voice acting.

Wendee Lee has brought over 500 characters to life, but when asked which was her favorite, she doesn’t even hesitate. “I think that’s self-evident,” Lee says with a chuckle. “Faye is the most iconic girl, chick, woman, child, badass, femme fatale, you name it. She encompasses it all, and I feel like she is somebody that was almost written for me.”

On Faye’s Complexity and Appeal

That’s a lofty claim for an actor who has made a career of voicing strong, complex, and unique characters like Haruhi Suzumiya, Shura Kirigakure, and Yoruichi Shihoin. However, it’s easy to see why she and fans of Cowboy Bebop are drawn to the femme fatale.

When we first meet Faye, one might assume that she’s just a pretty face or a love interest for Spike. But Faye soon becomes so much more than that. Lee describes Faye with words like “beguiling,” “gorgeous,” “clever,” and “edgy.” It’s clear that Faye is the type of woman that other women, including Lee herself, want to embody.

“She just kind of fulfills a lot of fantasy personality aspects that I wish I was bold enough to embody, but [that I] get to as an actor,” says Lee. “Just the fact that she has sass and edge, and she’s plotting and cunning and uses her sex appeal is so empowering as an actress. To be able to embody that is hugely rewarding.”

Indeed, Faye’s strength and unabashed embracement of her sexuality were ahead of her time. This may be why she and others on the Bebop continue to resonate with fans even 20 years later. But, as fans know, Faye Valentine isn’t perfect. In fact, her hardened exterior protects her from a tragic past that she can’t remember for most of the show. One where she loses her parents and her identity in one fell swoop.

Portraying the Vulnerable Side of Faye

When asked about portraying these more vulnerable aspects of Faye Valentine, Lee recalls that it wasn’t difficult. However, it was painful. “[Faye’s past] is so evident in why she becomes as hardened as she does.

“She is so wounded and damaged. It just personalized it, and it gave me so much more sentimental empathy for her. Yet, I wanted to protect her and keep her hard shell intact, and that’s hard. It’s just really hard to watch your characters get wounded.”

This isn’t surprising. We’ve all heard tales of actors who take their roles to the next level. Those who literally become the fictional character they are tasked to portray. This level of passion is why the show continues to move us. The cast was so dedicated to getting these performances right.

“As an actor, you are always empathizing with the character you are playing,” says Lee. “Even if they are a bad guy or a villain, you still find the humanness, the humanity, of a character by exploring that emotional track.”

Given the circumstances, it’s a wonder that Lee was able to pull this off at all. The cast was left in the dark about the direction of the story. They only found out what was next for their characters when a new script came down. That means Lee didn’t learn about Faye’s past until they were nearly done recording.

“Everything about the series, I did in real time. In fact, we were all encouraged not to research or look ahead or anticipate what was going on. Although, we would be itching for more stories,” Lee recalls. Her experience on the Bebop stuck with her as she moved into directing.

“It’s something that I still do, that I got from Bebop. I try not to move ahead with the story with my cast and let them live in the moment as we’re recording. Leading up to the ending and the climaxes of the stories, it’s so easy to find out in advance what’s going on now because you can just research it, but I am actually really open to being a clean slate, letting the moment wash over you, and having real-time reactions that you are recording.”

These real-time reactions, when used on Cowboy Bebop, resulted in genuine performances that made us laugh one minute and tugged at our heartstrings the next. This is something that’s difficult to pull off with an English dub. Many fans have a pre-existing bias against them, claiming that they don’t capture the heart of the original Japanese performances.

English voice actors, then, to stand out must often find ways to make these characters their own without destroying the source material. It’s tricky to navigate such territory, but Cowboy Bebop’s Lee masters it.

“I try to honor the intention of what the artist created originally and not just replicate it, but enhance it and bring something more to the performance, which I think is really evident in what the main cast delivered in the show,” says Lee.

The Automated Dialog Replacement (ADR) process that the cast went through left no room for error. The voice actors often didn’t get to see each other, as the process leaves them isolated. This may sound absurd to some, but this experience makes it easier to create polished performances.

“It’s just one actor, the director, and an engineer. You’re in a padded, windowless room holed up together for the 2 to 4 plus hours that you will be recording together,” Lee says of the intimate process. “Just one line of dialogue again and again until it’s perfected, which is a wonderful way to hone and craft each line of a performance.” It’s why iconic lines like, “You know what they say, cowboy, easy come, easy go,” are so ingrained in our popular culture.

Lee’s voice perks up as she talks about the process. She’s serious about her craft, and the challenges that it presents. “I’m so challenged by the technical aspect of matching the sync to every nuanced movement of the speaker on camera and taking the dialogue off the page and making it sound fresh and spontaneous,” Lee explains.

“Pulling all of that together, one line at a time, is hugely rewarding when it’s done right.” Judging by the lingering influence of the anime, it’s obvious that Cowboy Bebop got it right when it came to Faye Valentine.