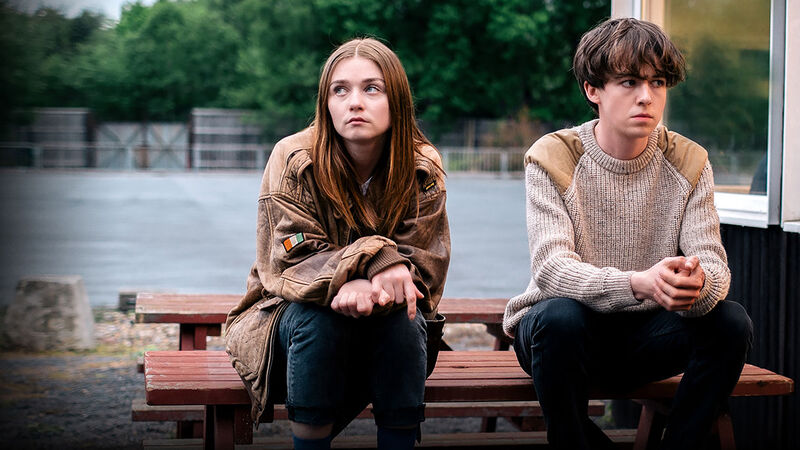 **Spoiler Alert** The following contains spoilers from Season One of The End of the F***ing World.

What happens when a psychopath and a sociopath fall in love and run away together?  You get a truly unique, dark comedy series called The End of the F***ing World.

This eight-part series chronicles the lives of two damaged teenagers on the lamb — James, a self-proclaimed psychopath who’s out for blood, and Alyssa, a misanthrope with a serious Electra complex. Starring Alex Lawther (Black Mirror, Freak Show) and Jessica Barden (The Lobster, Penny Dreadful), this sleeper-hit originally aired on E4 and now lives on Netflix.

Even if you aren’t typically a fan of dark, murderous comedies, you would have to be a total vegetable to not enjoy this series. TEOTFW is a fantastically fresh piece of television. So, it comes as no surprise that Netflix has ordered another season. This would be awesome, except for the fact that TEOTFW doesn’t need a second season. Here’s why:

Netflix makes most of their programming decisions based upon data. They know exactly what you want to watch, and when you want to watch it. Nevertheless, Netflix was completely blindsided by TEOTFW ‘s widespread success. Their forecasts fell short of how the show actually performed. They predicted underwhelming ratings for this series, and it’s doubtful that they originally planned to make multiple seasons.

Now, there’s nothing wrong with wanting more of a great thing. That being said, remember what Netflix did to Arrested Development? They took a really fantastic show and ruined it.

If that’s not convincing enough, think about 13 Reasons Why. The first season of this Netflix Original Series was about a teen committing suicide. In the second season, despite having run out of source material, Netflix pivoted to make the show a commentary about school shootings.

This disregard for authorial intent is troubling. It leads one to believe that Netflix is less interested in telling compelling stories and more interested in scoring high ratings.

Fans fear that continuing TEOTFW, a story that already had a definitive end, will turn it into something entirely different. That it will lose its bite, its authenticity, its original appeal. Given Netflix’s track record, the idea of a second season doesn’t seem very promising. We don’t want the success of the first season to be tarnished by another season not made in earnest. We all just want to remember TEOFTW at its best.

TEOTFW is a total testament to what happens when great writing is combined with incredible acting performances and masterful cinematography. A kind of artful approach to storytelling that is seriously lacking in most television these days. It’s just an incredibly refreshing story that stays true to itself. It doesn’t care if you get grossed out or turned off. That’s why this series has been nominated for an Emmy, a BAFTA, and a whole slew of other awards.

When watching TEOTFW, it feels less like a series and more like an arthouse film cut into delicious bite-sized chunks. That’s because TEOTFW was based upon the comic book series by the same name. It was adapted as a short film, then optioned out as a feature-length film, but later turned into a series when E4 got involved.

Sequels only really work when there is more story left to tell. What story could Netflix possibly have left to tell when the main protagonist was shot dead? The series ambiguously cuts to black at this moment in the plot; however, in the comics, James is killed by the police. That’s a pretty definitive end.

This second season will be going completely off-book. Without a protagonist and without any source material, what else will Netflix do?

we'll be f***ing back. pic.twitter.com/K1Ai7iVeZD

It could be argued that James’ death wasn’t actually shown on screen for the specific purpose of continuing his story with a second season. Although, Lawther insinuates that James actually died, and the ending had been recut to leave it open-ended for the possibility of another season.

What to Expect From Season Two

What will this new season look like? Perhaps Netflix will touch upon the satanist murder cult? They were an integral part of the comics, but they were completely absent in the series. If they do that, the series would enter into a completely new genre of television.

Could they continue the series with just Alyssa? I think that would leave some viewers wanting. Let’s hope our modern-day Bonnie and Clyde stick together because their chemistry is the cornerstone of this series.

Like it or not, this second season is happening. Luckily, the original screenwriter, Charlie Covell, is on board for Season Two. However, the author of the original comic book series, Charles Forsman, is not attached to the project at all. This all means that Season Two of The End of the F***ing World is somewhat of a mystery.  And no matter what it turns out to be, we’re definitely going to f***ing watch it.