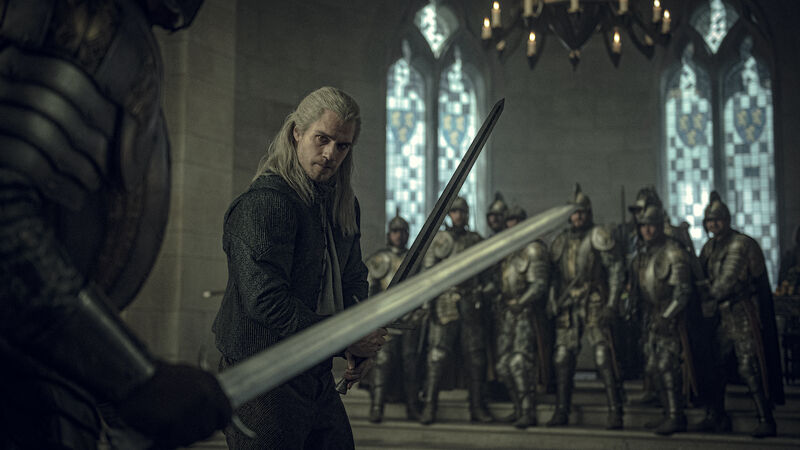 Venture Deeper Into ‘The Witcher’ With Dungeons & Dragons

Sharpen your swords, mix up a fresh batch of mutagens, and saddle up your mount, the second season of Netflix’s The Witcher is here!

But what makes the world of The Witcher so enthralling, and how can you capture that experience in Dungeons & Dragons (D&D), the classic tabletop roleplaying game? Continue reading to find out!

A realm of rich lore and monstrosities

Whether you’re a new or returning fan of The Witcher, you’ll find that the series offers little exposition. Instead, you’re immersed in the conflicts of a grim world and learn tidbits of information through exploration. The show slowly reveals details through flashbacks, non-chronological storytelling, and conversations. For example, you learn that the elves hate the humans not because someone tells you but because of an exchange between Geralt and elven refugees.

Playing D&D can be akin to this experience. As a player, you’ll create a character and discover a vast world and its troubles by playing as them. You’ll interact with characters played by the Dungeon Master (DM), who controls and details the world you explore, as well as its inhabitants.

Seeing the world that grows out of the game is one of the greatest joys of playing D&D. The DM and players work together to create a world and experience tailor-made for them. You could journey into the dark and gritty world of The Witcher or something else.

For those keen on running a game of D&D, the digital toolset D&D Beyond makes it easy to create characters, manage campaigns, and more. There, you can purchase the Dungeon Master’s Guide, which details worldbuilding and can be a fantastic starting point if you want to make your own Witcher-esque realm to explore.

An engaging world is nothing without characters to live in it — most of all characters that you care about. The Witcher is no exception. You have Geralt of Rivia, the White Wolf, Butcher of Blaviken. Terse, stoic, and a consummate professional, Geralt doesn’t involve himself in petty squabbles or political dealings. He’s there to get the job done and get paid, the classic adventurer!

With the abilities granted to him by the Trial of the Grasses, as well as his comprehensive training, Geralt is a formidable foe in battle, one perfect to recreate in D&D with the many options it presents you. To do so, you’d want to select the Monster Slayer ranger, a hunter of those that prey on the weak. But don’t be afraid to explore beyond the obvious, though. Geralt’s combination of martial and alchemical abilities could also be well represented by the sword and spell wielding Eldritch Knight fighter. The Hexblade warlock could also be a good choice as they are granted dark powers by a mysterious force that manifests as a magical sword.

Now, there might be some disagreement here, but I think the next most important character in the series is none other than Jaskier the bard! Fast friend, comic relief, and often a source of trouble for Geralt, Jaskier (called Dandelion in the games), is most likely a College of Lore bard, a teller of stories, keeper of histories, and proclaimer of great deeds. If you endeavor to recreate him in your D&D game, make sure you capture his devilish nose for mischief — and that you’re ready to toss a coin to your witcher!

Finally, we have the formidable and relentless Yennefer of Vengerberg. Described in the show as a sorceress, she is equal parts love interest and foil to Geralt. A force to be reckoned with, she never lets anyone stand in the way of her goals. If you were to make Yennefer in D&D, you might want to look at either Storm Sorcery or possibly Shadow Magic. Alternatively, you might wish to make Yennefer a School of Transmutation wizard, to represent her mastery of transformational magics.

While these three characters get the most screen time in the show, that is not to downplay the significance of the other recurring characters, and even those that appear for a single episode. One of the great things about The Witcher is how every character is made to feel like a real, complex, and motivated person. When making your characters for D&D, be they PCs (player characters) or NPCs (non-player characters), think about what drives them and motivates them to do what they do.

Character relationships you care about

Watch even a few episodes of The Witcher and you’ll soon see that for a show about slaying monsters, there are some strong inter-character relationships between Geralt and the other protagonists of the show. You’ve got the simmering — and often boiling over — romance between Yennefer, the comedic but still touchingly intimate friendship with Jaskier, and the intertwined fate he has with the young Ciri.

Providing deep and exciting relationships for your players can be a wonderful way to make your D&D game feel alive. As The Witcher demonstrates, a variety of NPC bonds can provide plenty of color for social interactions at the table, one of the greatest parts of playing a roleplaying game. Romance, friendship, obligations, and duty all offer unique ways for characters to develop relationships with NPCs.

A great starting point for such bonds is the section of Xanathar’s Guide to Everything titled “This Is Your Life,” which offers a plethora of tables to roll on that can be used to create some interesting NPCs.

The Witcher would be nothing without its monsters, which draw on a lot of real world fairy tales and myths, particularly from slavic folklore. You have werewolves, cockatrice, wyverns, and vampires, but you also have monsters such as the kikimora (very much not like the house spirits of lore) and the cursed striga. What makes the monsters of The Witcher stand out is twofold: their deadliness and their nuance.

Monsters in The Witcher are terrifyingly deadly, with a single beast often being an equal match for Geralt. D&D has lots of tools for recreating that kill-or-be-killed atmosphere of The Witcher. Monsters with such abilities as legendary actions or lair actions can terrify the players! Monsters such as the ankheg, basilisk, griffon, or peryton can make for great hunts in your Witcher-esque campaign and if you decide to take up the mantle of DM, you can make a monster even more deadly, giving it your own custom style using the Dungeon Master’s Guide section on modifying monsters.

The second facet of what makes the monsters in The Witcher so intriguing is they’re not always the villains, and are instead just victims of fear and misunderstanding. People cursed to become foul beasts, fey creatures wanting to live peaceful lives in the forest, or elven spirits that claimed the land a millennia before humans came along all make for dramatic interactions full of rich nuance. When picking monsters for your D&D game, think about the possibility of the monsters not being in the wrong, or at the very least being just as in the wrong as those that have hired the heroes to hunt them.

When all of the above elements begin to mix together, you get the final secret of what makes The Witcher such a fantastic series. It’s the layers of narratives spanning decades and nations and ranging from small, intimate arcs involving a handful of characters to broad, sweeping dramas involving war, politics, and fate. But what binds them all together so well is pacing.

The Witcher alternates between big and small stories using a mixture of flashbacks, non-chronological storytelling, and time skips. Each episode adds a detail to the world that doesn’t necessarily build directly on the previous episode, but instead casts it in a new and interesting light. Characters spend years apart only to be reunited by a twist of fate. An episode takes place a decade in the past, shedding new insight on the relationship Geralt has with a person or place. All in all, it’s a complex web of stories that doesn’t tie itself down to just advancing one step in front of the other.

You can experience this in a game of D&D through the many ways the game can be played. You can do one-shots — short adventures that span maybe a single session or two — that tell a story in the world from a different perspective. Maybe you decide to play a group of monster hunters from your guild that went missing 100 years ago? Alternatively, the story can advance one, 10, or even 50 years in order for the characters to grow and develop into new people, reuniting for one last hunt. By using these storytelling approaches, the narrative of your D&D game can expand beyond the sequential session-by-session approach and get that rich, Witcher-like narrative atmosphere.

With season two of The Witcher, there’s no better time to start up a D&D campaign inspired by the series. And it couldn’t be easier with D&D Beyond.

Davyd Atkins
Davyd.Atkins
Davyd is a moderator for D&D Beyond. A Dungeon Master of over fifteen years, he enjoys Marvel movies, writing, and running D&D for his friends and family, including partner Steph and his daughter Willow (well, one day). They live with their two cats Asker and Khatleesi in the south of England