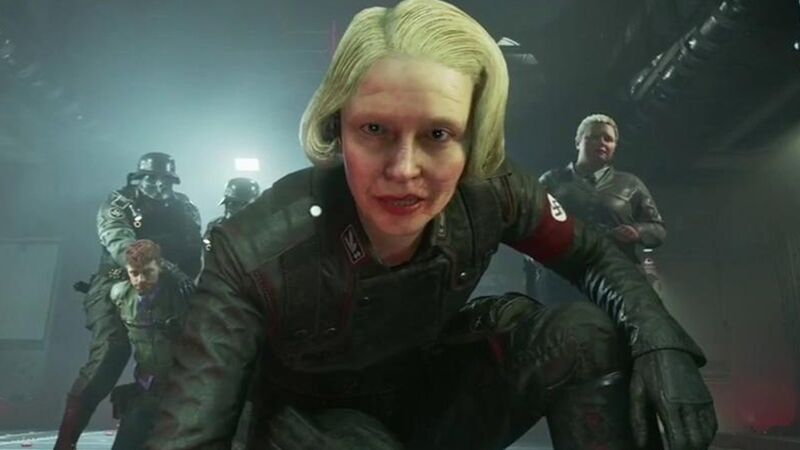 In a world where game publishers are afraid to make political statements, last year’s Wolfenstein II: The New Colossus was a breath of fresh air. Set in an alternate universe where the Nazis won World War 2 and invaded the U.S., this fast-paced shooter had a very clear message — “F*ck Nazis.”

With Bethesda repeatedly hammering home the message through its marketing (and on stage the other night), gamers rejoiced at seeing a game company take a stand against hatred. Now, Nintendo fans can finally see what all the fuss is about. In a few short weeks, they’ll be able to slay Nazis on the go in Wolfenstein II: The New Colossus on the Nintendo Switch.

It’s not just a game delivering a cool message though. As anyone who’s played it will attest, Wolfenstein II is also a brilliant little shooter. Developed by the very talented Machine Games, this first-person adventure blends realistic shooting and a powerful story with expansive sandbox environments to create an immersive experience. But with the game being something of a technical showcase on PS4 and PC, we were a bit concerned it wouldn’t survive the transition to Switch intact.

Murder on the Move

Like Bethesda’s DOOM port before it, Wolfenstein II puts Nintendo’s hybrid console through its paces. Tech wise, Wolfenstein II’s performance is pretty much identical to DOOM on Switch. Running at a dynamic resolution that caps out at 720p, Wolfenstein II on Switch once again drops the resolution in places to keep things running smoothly.

And boy does this feel smooth. While it’s running at only 30 frames per second, just like the DOOM port, the combat has really been tweaked for Switch, with visual flourishes like motion blur making the action feel far more responsive than you’d expect.

Yet, while DOOM on Switch shined in portable mode, it wasn’t exactly a looker when played on the big screen. We didn’t get a chance to see how Wolfenstein II performs while docked, but it felt brilliant on the Switch’s little screen.

As DOOM has already showcased how the engine runs on Switch, this may not sound that newsworthy. Yet, thanks to the finer detail and larger environments of Machine Games’ Nazi epic, playing Wolfenstein II on a handheld feels hugely impressive.

Since Nintendo’s E3 conference failed to show off many new mature games, it appears Wolfenstein II will comfortably claim the Switch’s FPS crown. It’s been a bit of a wait for this one, but based on what we’ve played — the Switch port will be more than worth the wait.

Wolfenstein II: The New Colossus comes to Switch on the 29th of June.