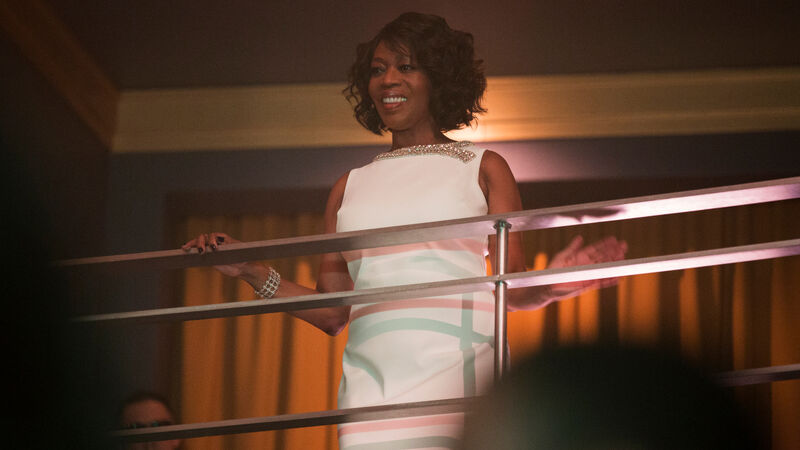 SPOILER ALERT: This post contains spoilers about the women of Luke Cage in Season 2. Proceed with caution.

Fans would be right to assume that the focus of Luke Cage Season 2 would be a showdown between Luke Cage (Mike Colter) and the latest, also super-strong villain, Bushmaster (Mustafa Shakir). While this is certainly the case, over the course of 13 episodes Bushmaster’s real issue is revealed: he’s after Mariah Dillard. Mariah’s role in his family’s tragedy, Misty Knight’s role on the police force, and even Mariah’s daughter’s role as a woman caught in the middle, puts the women of Harlem and the women of Luke Cage front and center in Season 2.

Characters like Mariah Dillard (Alfre Woodard) and Misty Knight (Simone Missick) get as much screen time as Luke and their character growth is just as, if not more, nuanced. These characters have complex motivations and unique ways of navigating the world around them, especially as women of color. Luke Cage explores all different kinds of womenhood and is a stronger show for it.

One of the major themes of Luke Cage Season 2 is characters learning how to embrace their true nature — for better — or worse. In this sense, Luke and Misty parallel each other, as they both going on a journey this season to figure out what justice means to them. As a detective, Misty has witnessed first hand how the justice system can fail. She even goes so far as considering planting evidence at a crime scene because she believes it is the only way she can help save a victim’s life. She then begins to doubt herself and her integrity, worried that she is going down the same path as her former partner Scarfe (Frank Whaley).

Misty is a flawed hero. She’s doesn’t always play by the rules. But she believes in doing what is right. As Luke’s journey takes him to the top of Harlem’s crime ladder, Misty is brought back to her roots in the law. It’s an arc that brings her full circle. She returns to the confident detective she was in season 1, but this time operating on her own terms. Luke and Misty aren’t perfect, but they are worth rooting for because they have a strong moral code and belief in doing what’s right.

Mariah and her daughter Tilda (Gabrielle Dennis) also go on a journeys of self discovery, but in very different ways. Both women spend much of the season denying who they really are. They choose to go by the last name Dillard because of the weight it holds in the community. Tilda also believes it connects her to her late father and strives to live up to his legacy.

Mariah especially rejects her past as a Stokes. She is still angry over the pain she suffered at the hands of her own family members. She wants to distance herself and become a legitimate businesswoman. Bushmaster even uses the name as a taunt, connecting her with a past she was born into, not one she choose for herself. However, as the season goes on, Mariah decides to reclaim her Stokes name. Throughout the season Mariah engages in unspeakable crimes, but it is the moment she embraces the Stokes name that she truly becomes evil.

In turn, Tilda rejects her Stokes family. After learning the truth about her birth, she decides to go by the last name Johnson, for the people who raised her. Tilda’s story becomes one about creating her own legacy, rather than living for others. Mariah and Tilda’s growth gives realism to their characters. They are not just stock comic book villains, but women who have suffered and come out stronger. You understand their motivations and even root for them to succeed, despite a culture that has continually pushed them down.

The women of Luke Cage are central to the story Netflix is telling. They are not merely sidekicks (something Misty actually tells Luke) or love interests. Misty is a character with her own motivations and agenda. She is adjusting to life after the shocking events of The Defenders, and a life without her right arm. It’s Colleen Wing (Jessica Henwick) who helps Misty get her mojo back and Inspector Ridley (Karen Pittman) who inspires Misty to stay the course. Misty’s story operates independently of Luke (and honestly her job would probably be a lot easier if he wasn’t around).

For her part, Mariah might be even more central to the plot. It is her rivalry with Bushmaster that causes this season’s tension. Bushmaster has a beef with Luke, but only because Luke is standing in his way. Bushmaster’s real problem is with Mariah over the issue of his birthright, namely Harlem and Harlem’s Paradise. His story is driven by the women in his life. Bushmaster wants to get revenge for the death of his mother. Even the origin of his strength comes from a woman, first from the bushwoman who healed him in Jamaica and then Tilda and her expert mixture of herbs. Without this backstory, Bushmaster would be nothing and his battle with Luke would not be as interesting as it is.

Alhough Claire Temple (Rosario Dawson) doesn’t play a large role in the season, she leaves a lasting impression. Her absence speaks volumes as Luke is forced to face his demons on his own in Season 2. She might be a love interest, but Claire has also more than proven herself throughout multiple Netflix Marvel shows. She is the voice of reason. Claire knows Luke better than he knows himself and leaves on her own terms. It is her departure that eventually leads Luke down the path that ends with him as the new owner of Harlem’s Paradise.

The women of Luke Cage have agency. Their decisions drive the plot. They are integral parts of the story, making it all the more compelling to watch.

Luke Cage also represents different kinds of women, which is a reflection of real life. The female characters on this show are both good and bad, altruistic and selfish, heroic and villainous in ways both large and small. They add complexity to the story, populating the world of Luke Cage with characters who ask the tough questions about what is right and wrong.

Within the police department, there are three different, strong-willed women: Misty, Inspector Ridley, and Nandi (Antonique Smith). They all have very different ways of looking at how to best protect and serve their community. Sometimes Misty acts rashly, which usually comes from a place of wanting to help others. Nandi puts her own needs above everything — including her partner, and Ridley has the press and the city to answer to and cannot afford to ignore the rules.

It’s inspiring to see so many different kinds of women sharing the screen together. Luke Cage Season 2 perfectly proves that there is no one “right” or “wrong” way to be a woman. Whether it’s Mariah, Tilda, Misty, Claire, or Colleen, these characters experience being as morally corrupt or as overly heroic as any male character on the show. Other shows should take note.

Luke Cage Seasons 1 & 2 are currently available to stream on Netflix.