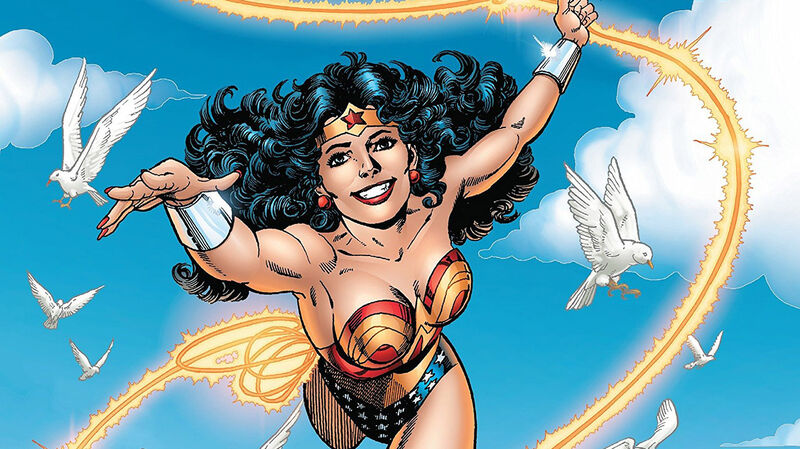 What Wonder Woman Was Actually Up to in the 1980s

Fans have been anxiously awaiting the debut of Wonder Woman 1984 ever since the sequel was announced, following the success of 2017’s Wonder Woman. Of course, back then, not even an Oracle could have predicted all of the roadblocks that have stood in the way of actually seeing the 80s-set Patty Jenkins helmed film, which will finally be released in some theaters — but also, notably, on HBO Max — on December 25th.

To try and get a feel for some of its comic book inspiration for the film, we’re digging into the Wonder Woman stories that DC published in the decade the film is set.

A Tale Of Two Realities

When the 1980s began, it was a strange time for Wonder Woman. The beloved TV series starring Lynda Carter had recently ended in 1979, but lived on in hearts and reruns well into the Me Decade. The same can be said for her appearances on the long-running animated series Super Friends. However, in the comics, her stories were not exactly blowing people’s minds. Even with huge names like Roy Thomas, Gene Colan, Gil Kane and Don Heck, these stories — while still entertaining, fun and even progressive at times — are not hailed as must-read appearances by the character. But luckily, great things lay ahead as the decade went on.

Before getting too deep into Wonder Woman’s 80s exploits, there’s something that also requires a refresher: the multiverse. By the time these comics came out, DC had decided to offer a variety of realities for readers to enjoy. Earth-1 played home to the Justice League and their exploits, while Earth-2 featured a world in which the Justice Society had been established and continued hero-ing until mostly hanging up their capes and letting the next generation take over. as seen in titles like Infinity Inc. As such, there were two Wonder Women running around to varying extents at this time. Earth-2 Diana married her longtime companion Steve Trevor and the pair had a daughter named Lyta who went on to become the hero Fury.

The pair of Amazonian warriors met and became fast friends, but the Earth-1 version was the one starring in the Wonder Woman series through the 80s. To get an idea of how the two realities worked together, “Judgement In Infinity” from 1982’s Wonder Woman #291-293 provides a great example.

In that extended story, Earth-1 Wonder Woman discovered a strange being called The Adjudicator who sent the Four Horsemen of the Apocalypse to Earth-1, Earth-2, Earth-S (the reality inhabited by Shazam and his ilk) and Earth-X (where the Nazis won World War II). To save those realities, she worked with a variety of heroes like Power Girl, Huntress and Supergirl.

Halfway through the decade, DC decided to streamline their titles and do away with the multiple realities with a story called Crisis on Infinite Earths. This 12-issue series that had tie-ins in every title along the way eventually wiped the slate clean, leading to a brand new universe (generally dubbed New Earth) and a new volume of Wonder Woman in 1987.

Written and drawn by the legendary George Perez this new series established that the Amazons were reincarnated spirits of women whose lives had been taken from them. Lead by Hippolyta, these women thrived in arts, science and sport, but failed to fulfill their deal with the goddesses. After a bloody battle with Heracles’ forces that was partially instigated by Ares, the goddesses tasked them with living on Themyscira away from the rest of the world.

It was there that Hippolyta eventually crafted a daughter from the mud near the ocean. Blessed with great powers by the gods, the child drew breath, thus Diana was born! She became the daughter of the entire island, learning from her sisters as she grew into a formidable warrior.

When the oracle of Paradise Island said that they needed to send the very best of them to stop Ares’ destruction of the planet, the Amazons held a tournament to see who their champion would be. Though her mother forbade it, Diana still entered in a mask and wound up earning the honor, becoming Wonder Woman.

The George Perez run on the character has become one of the most referenced periods in Diana’s 80-year history. Perez took the mythological elements he and Marv Wolfman dipped into with New Teen Titans and expanded it into a world that has had a huge influence on pretty much every version of Wonder Woman since, including in the films. In fact, the armored warrior take on the character would later influence the Golden Eagle armor that first appeared in 1996’s Kingdom Come and now makes its big screen debut in Wonder Woman 1984!

The Claws Come Out

Throughout the decades, Cheetah has been one of Wonder Woman’s most persistent foes. Priscilla Rich, the first version who debuted back in 1943, was a jealous socialite who became a costumed criminal after Wonder Woman upstaged her at an event. In 1980’s Wonder Woman #274, Rich’s niece Deborah Domaine became the new Cheetah.

The name Barbara Minerva — which is Kristen Wiig’s secret identity in the film — came along after the Crisis relaunch and was established in 1987’s Wonder Woman #7. Minerva was an heiress like her predecessors, but took the Cheetah mantle to a new level by becoming a human-animal hybrid!.

While the 1980s established her new identity, the current version of Barbara Minerva in the comics — from a reality known as the New 52 which rewrote history on a similar scale as Crisis On Infinite Earths — seems to be the one that influenced Wiig’s take the most. She’s a super-smart woman who has mastered several languages and become a doctor of archaeology twice over who eventually becomes a Cheetah that moves between a human and animalistic form. The trailer makes it appear as though Wiig’s Minerva begins as a quiet scientist and turns into a fierce feline fury.

We Have To Talk About Max

In addition to Cheetah, Wonder Woman 1984 also features another prominent villain: Maxwell Lord. Played by Pedro Pascal in the film, this character is a media personality trying to offer people their heart’s desire (suffice to say, you probably should be suspicious). While an interesting take on the character, bringing to mind the ever-present televangelists and infomercial hucksters of the era, the specific connections to the comics are a bit murky.

Maxwell Lord first appeared on the comics scene as a businessman who came to manage the world’s most premiere super team in the pages of the classic Justice League International. Shady in the way many an 80s businessman was, Lord turned out to be partially possessed by a powerful A.I. After being relieved of that burden, an alien Gene Bomb unlocked latent super powers in a portion of the population including Max. He now had the ability to control others’ minds, but it did not come easy to him.

Much further down the line — in 2005’s Countdown To Infinite Crisis — it was revealed that Lord had been secretly building a power base that whole time and eventually took over the espionage organization known as Checkmate. He even went so far as to murder one of the Justice Leaguers he brought in, the Blue Beetle. Lord in the film looks to take bits and pieces from the character’s long history while creating something unique for Pascal to play with.

What’s Up With Steve?

Presumed dead in the first Wonder Woman film, it was a bit surprising seeing Chris Pine’s Steve Trevor not only alive, but seemingly un-aged in the 1980s. The comics of that era did however lay the groundwork for a story about Steve Trevor returning.

In the pre-Crisis comics, there were two Steve Trevors just like there were a pair of Wonder Women. We talked about the family man on Earth-2 who married Wonder Woman, but the Earth-1 version had been killed off in previous decades. Reemerging early in the 80s, Trevor was revealed to come from yet another alternate reality in Wonder Woman #322. However, after a fight with Eros, Steve was exposed to the Purple Ray which gave him all the memories of the Steve that Diana knew. This pair fought together until Crisis rewrote history.

With Perez’s Wonder Woman reboot, the relationship between Steve and Diana was greatly altered. As seen in Wonder Woman #2 from 1987, he was an older man who wanted to do the right thing, but did not have the romantic spark that developed in other versions of their relationship – including in the popular version Chris Pine would play onscreen.

Wonder Woman 1984 will be released on December 25th in select theaters and on HBO Max.