His Origin and Influence

When comic book legends Stan Lee and Jack Kirby created the Black Panther, it was the height of the 1960s U.S. civil rights movement. But unlike Spider-Man and the Fantastic Four – other Marvel heroes from that era – the Black Panther was neither white nor American.

“I couldn’t see the Black Panther living on a side street in New York,” Lee explained in a Marvel interview. ”I loved the idea of a superhero that lives in Africa.”

It’s that background that makes T’Challa, aka the Black Panther, unique; he’s not only black, he’s African. His ties to the continent and culture grant him a rich and complex mythology that his American counterparts do not have.

“I couldn’t see the Black Panther living on a side street in New York. I loved the idea of a superhero that lives in Africa” — Stan Lee, Black Panther creator

Afrocentrism defines every part of his character, beginning with his name. There’s the literal definition. Black panthers, the great cats native to Africa, serve as a motif for T’Challa’s superhero persona. Then there’s the fictional definition. The Black Panther is a title given to each chieftain of the Panther Clan of Wakanda, the nation that T’Challa rules.

In the new Black Panther feature film, Afrocentrism and Afrofuturism – the interpretation of African traditions into their futuristic possibilities – combine to create an aesthetic never before seen in the Marvel Cinematic Universe.

With the Black Panther in theaters, we examine how Afrocentrism and Afrofuturism inform Wakanda, its leader, and its citizens. 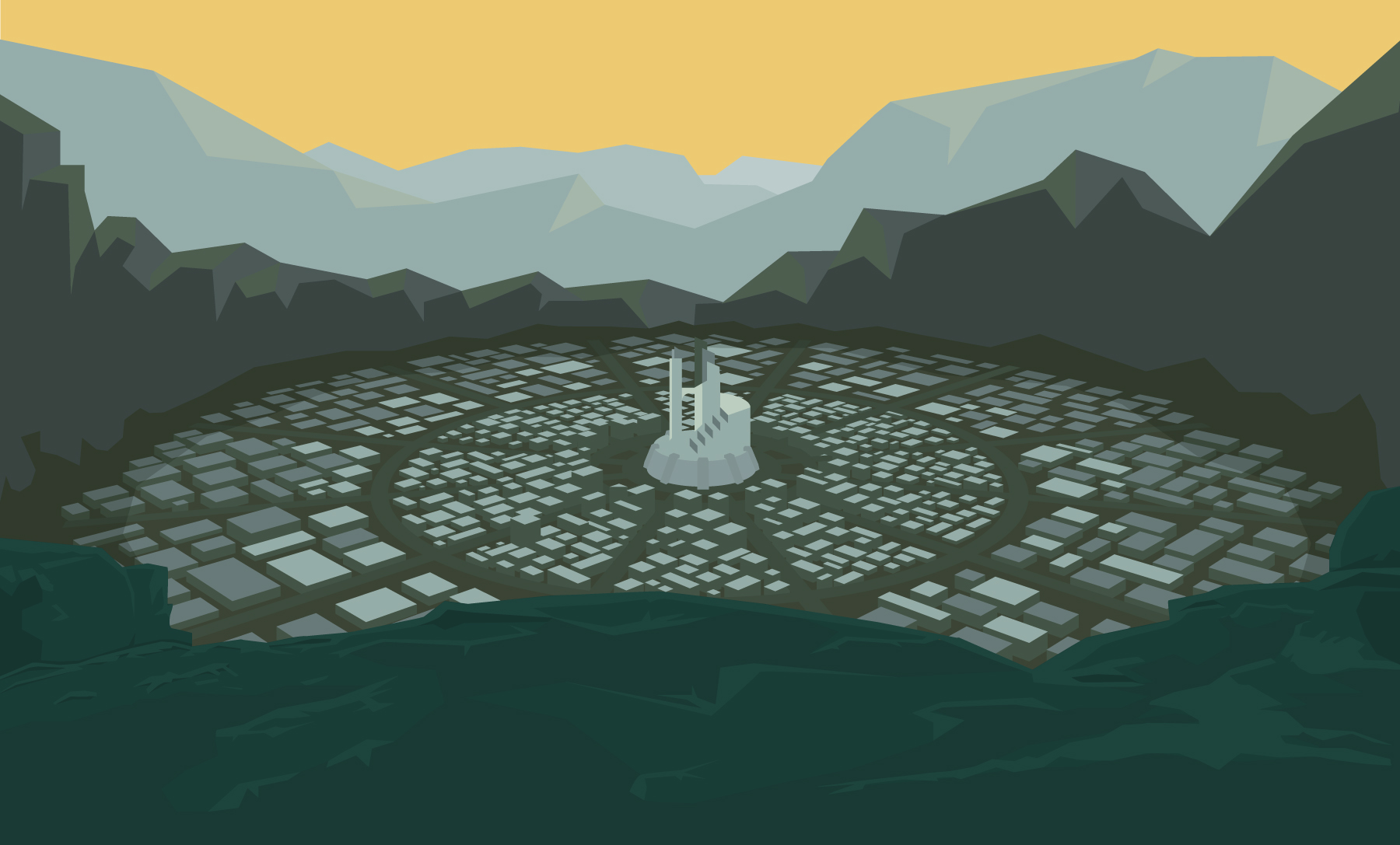 A Nation of Dualities

Wakanda is a fictional country in Africa and T’Challa’s home. Its name hearkens back to a long-standing African kingdom.

“The name Wakanda sounds like Buganda, which is one of the most powerful kingdoms in East Africa in present day Uganda,” explains Dr. Chika Okeke-Agulu, Professor of African and African Diaspora Art at Princeton University. “The British valued the Baganda [the people] and the king of Buganda so much that they became ascendent during the colonial period. It's a very sophisticated kingdom. So there’s that play [between] Wakanda and this great kingdom in East Africa that still exists in the present day.”

But Wakanda differs from Buganda and many other African nations because it was never colonized by European settlers. Instead, the fictional nation adopted isolationist policies and saw foreigners as threats.

“Even if one has a fictional country that has never been colonized, that doesn’t mean it doesn’t have contact with the rest of the world,” explains Dr. Steven Nelson, Director of the UCLA African Studies Center.

To outsiders, Wakanda plays into the notion of the remote, undeveloped country. In reality, it is the most technologically advanced nation in the world thanks to its prized natural resource: vibranium. When the black-market arms dealer, Ulysses Klaue, smuggles the metal out of the country, Wakanda is forced into the global arena, making the fictional nation a target of foreign interest and influence.

“Even if one has a fictional country that has never been colonized, that doesn’t mean it doesn’t have contact with the rest of the world.” — Dr. Steven Nelson, Director of the UCLA African Studies Center

Vibranium powers Wakanda’s innovation and technology. The skyline rivals the most modern, futuristic metropolises. With an advanced monorail, flying transportation, and a sophisticated cloaking system, the city is a marvel of technology.

However advanced and innovative Wakanda appears, its citizens still respect nature – the Black Panther’s base of operations is set in a mountainside cave, ceremonies are held at waterfalls, and the city is surrounded by forests and rivers.

This is a nation of dualities – one that relies upon technology and natural resources to thrive.

“It reminds me of The Matrix, where you have high tech and people coming out of rocks,” explains Professor Nelson. Indeed, in Black Panther, viewers see Wakanda modern skyline as well as its inhabitants emerging from Warrior Falls, a massive waterfall.” 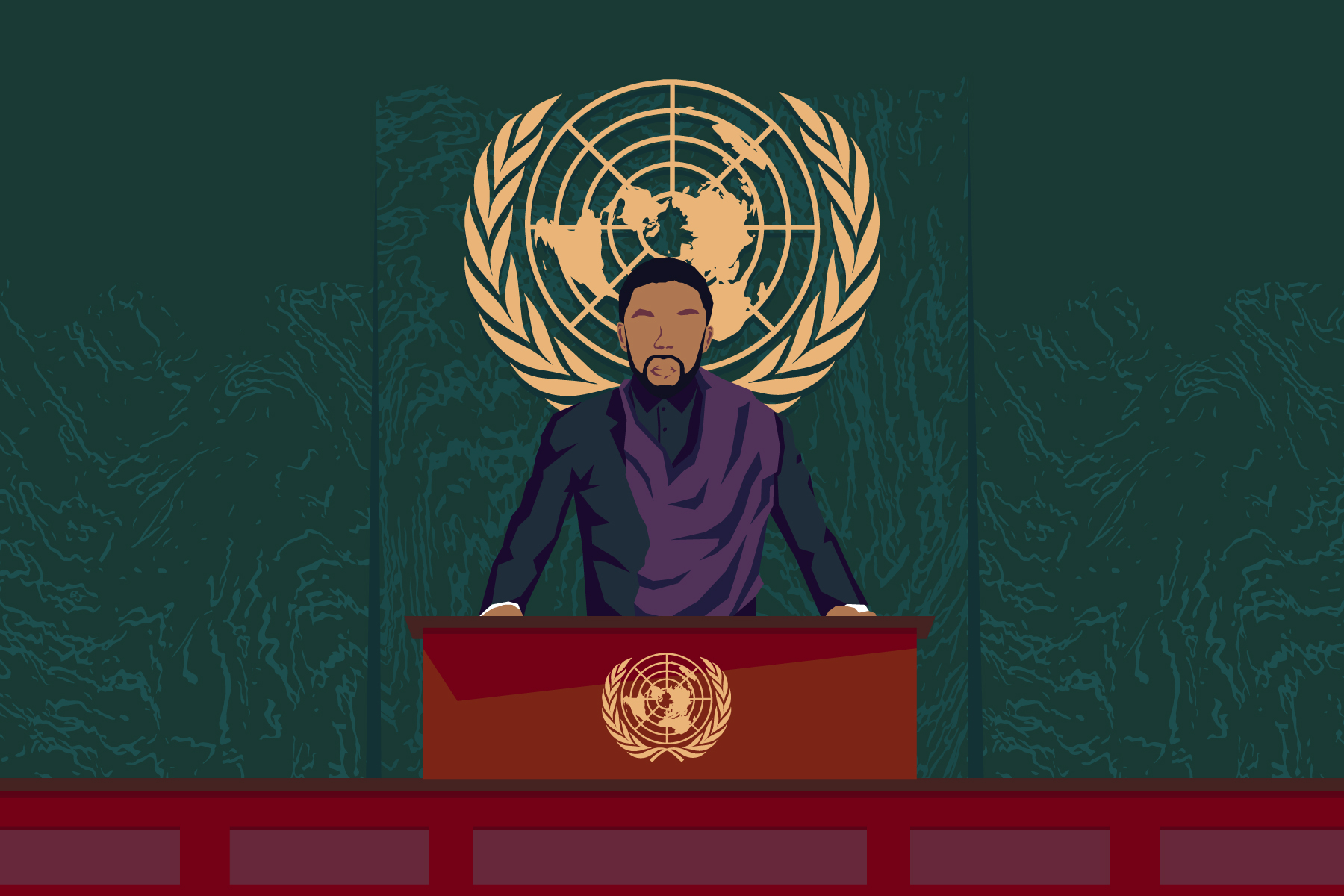 T’Challa is not only the protector of Wakanda, but the country’s political head as well.

“He has to look out for an entire nation,” actor Chadwick Boseman explains in a Marvel interview. “That’s a responsibility that other superheroes don’t commonly have.”

A Wakandan first, T’Challa’s dress includes obvious nods to his culture, mainly the colorful scarf he wears in the film while addressing the U.N. The scarf, when paired with T’Challa’s modern monochromatic suit, is another example of tradition meeting futurism. “We can easily believe that they have been trading with these other places and have suits and phones and all of those things,” explains Dr. Nelson. “You would still wear a traditional marker of a heritage,” Nelson says of T’Challa’s accessory.

Even when barely clad, tradition and futurism collide. In one scene, T’Challa and his archenemy, Killmonger, duel for dominance. Despite living in a world of high-tech weapons, the men engage in hand-to-hand combat. It’s certainly not modern warfare; their fight is almost ritualistic. They use daggers instead of guns and don mud cloth shorts, which Nelson describes as “textbook Mali.”

“[The suit] doesn’t evoke any particular culture as much as it does more of an aesthetic of Marvel movies,” Nelson says. It’s a comic book character.” — Dr. Steven Nelson

During their second fight, they don high-tech Black Panther and Golden Jaguar suits (more on these later), which seemingly materialize out of nowhere.

The Black Panther suit, or “Habit,” also strikes a perfect balance between honoring tradition and embracing the future. The costume pays homage to Bast, the Panther God and bestower of the Black Panther power. But it’s also laced with vibranium, which gives the Black Panther superhuman durability and agility. He is, after all, a modern African hero.

“[The suit] doesn’t evoke any particular culture as much as it does more of an aesthetic of Marvel movies,” Nelson says. It’s a comic book character.” 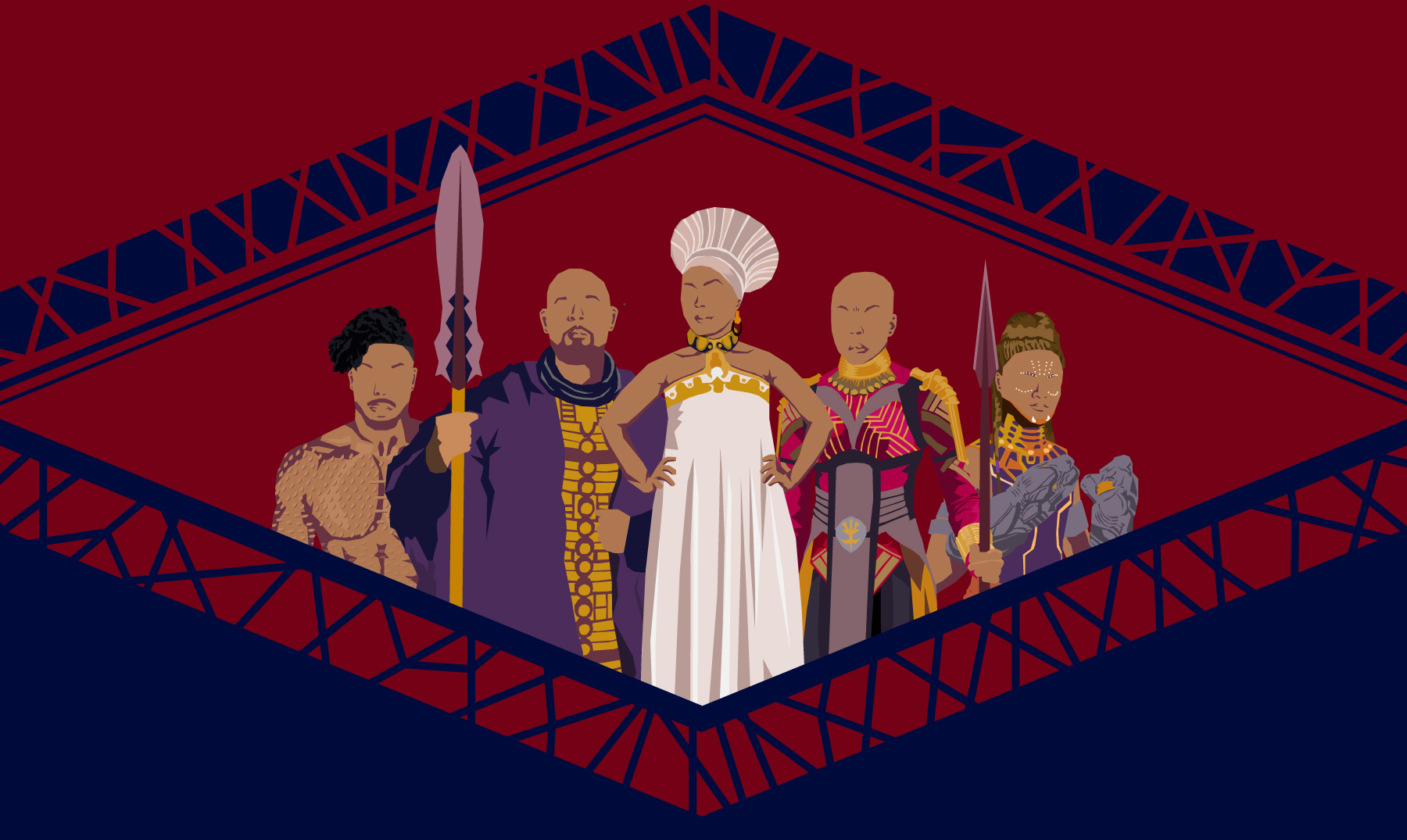 What Inspires the Wakandan Wardrobe

Afrocentrism and Afrofuturism extend beyond the titular character; they define the Black Panther’s family, his people, and even his foe.

From headdresses and tribal markings to the ever-popular kente cloth, Black Panther’s costume designer, Ruth Carter, borrowed directly from numerous African cultures. But it’s the amalgamation of these cultures that is decidedly modern.

Just take a look at the bounty of colors encountered at Warrior Falls as T’Challa enters. “There are tons of characters. I think they sampled essentially every contemporary African fashion they could lay their hands on,” explains Dr. Okeke-Agulu. “I think that’s the one moment that you see the kind of fashion that you could see in the Nigerian house of assembly with the politicians dressed up in their African formal gear.”

In contrast, the Wakandan royal family has a far more restrained color palette, sampled primarily from East and South African cultures such as the Maasai, Ndebele, and Zulu.

Zuri (Forest Whitaker), the keeper of the heart-shaped herb that grants powers to each Black Panther, wears a purple dashiki, a West African street woven cloth. But his heavily tattooed face has more visual effect than historical basis.

T’Challa’s sister Shuri (Letitia Wright) is an inventor, and combines her traditional dress with wearable technology, including two panther-inspired gauntlets that shoot energy. Both she and T’Challa’s girlfriend, Nakia (Lupita Nyong’o), often have high, rigid collars evocative of the infamous Ndebele neck rings.

The Dora Milaje, the female warriors that protect T’Challa, accent their bright red uniforms — reminiscent of the Maasai and their warrior culture — with neck rings. The rings are an old symbol of faithfulness that aligns with the Dora Milaje’s oath to protect the Black Panther and serve as his wives-in-waiting. This is a modern and female-empowering choice, as Maasai women did not enter combat. As Professor Nelson puts it, “[Maasai] women going to war? Not happening.”

“There are tangential connections to African fashion [in Black Panther]. But for the most part these are contemporary inventions,” explains Dr. Okeke-Agulu. “You might find some African designers today in Lagos or Kampala or Kinshasa who are making these kind of contemporary designs but they are not necessarily strictly traditional African fashion.”

“I think that it is beautiful, I think it looks great. [Ruth Carter and the design team] looked at their sources really smartly and what they did – and what one does with sources – is that they made it something else. It’s smart, it’s not lazy. The end product is what the filmmakers want to articulate.”

“They play fast and loose with the connections to African art and aesthetic and fashion in a way that I think works,”adds Dr. Okeke-Agulu.“If they tried to do more than that in terms of trying to be faithful, it would be a more narrowly imagined and designed film than what I’ve seen so far.”

That wider interpretation includes an amalgam of African cultures and untraditional modern materials. This is evident in Ramonda’s elegant, 3D-printed shoulder piece and the Dora Milaje’s sleek uniforms – both the result of tribal fashion projected into a technological future. But it’s Killmonger’s look that epitomizes this best.

“They play fast and loose with the connections to African art and aesthetic and fashion in a way that I think works.” — Dr. Okeke-Agulu, Professor of African and African DIaspora Art, Princeton University

“What’s so interesting about his opponent is the scarification on his body. Often, those kinds of patterns would be on women and not on men,” Nelson says of the bumps on the villain’s torso.

“Those kind of raised markings are seen in images of Central African women – Luba queens and princesses from the Democratic Republic of the Congo – I’ve never seen them on men. They’re marks of beauty and marks of status.”

Given that Killmonger wants the Wakandan throne for himself, it wouldn’t be a surprise for him to adorn himself with status symbols. 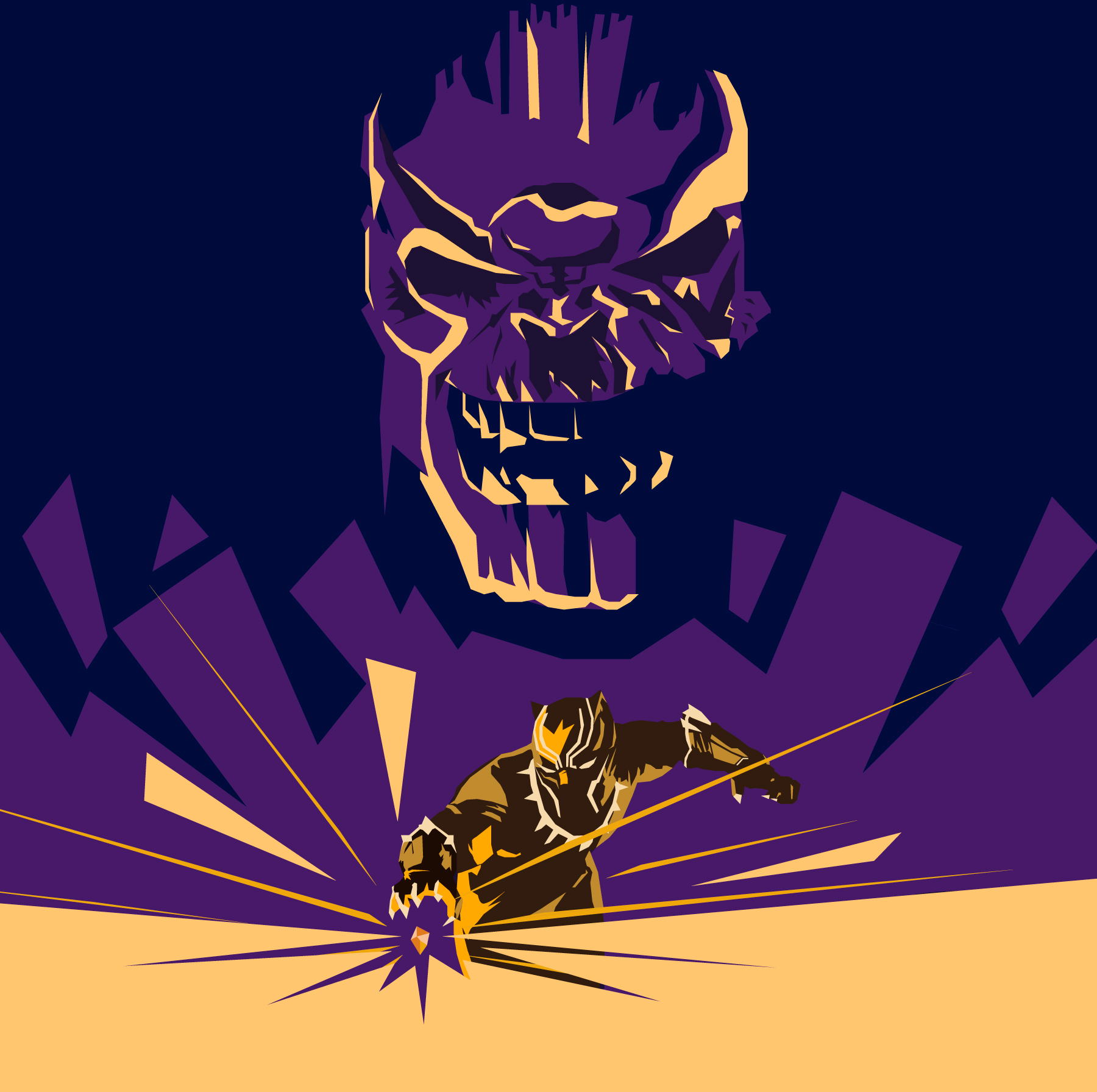 The Black Panther’s story and look is not contained to one movie; it will extend to rest of the Marvel Cinematic Universe.

“Evacuate the city, prepare all defenses, and get this man a shield,” T’Challa instructs his commanders, as Captain America emerges from the shadows.

The First Avenger, along with Iron Man, Winter Soldier, Black Widow, Falcon, War Machine, and The Hulk will join the Black Panther and hundreds of Wakandan warriors against an alien army sent by the interdimensional conqueror Thanos. The hermit kingdom of Wakanda becomes the battleground in the fight for Earth, with its warriors the first line of defense.

T’Challa’s warriors are armed with traditional weapons, while he is equipped with the latest Wakandan weaponry. It’s the old and new together.

What Thanos is seeking is unknown. Perhaps he is calling out Earth’s mightiest heroes. Perhaps he’s after vibranium. Or more likely, the sixth and final Infinity Stone – the Soul Stone – widely believed to be in the Black Panther’s possession.

Whatever the prize, if it falls within Wakanda’s borders, be sure that the Black Panther will be there to protect it.

By Karla Clark and Lawrence Yee