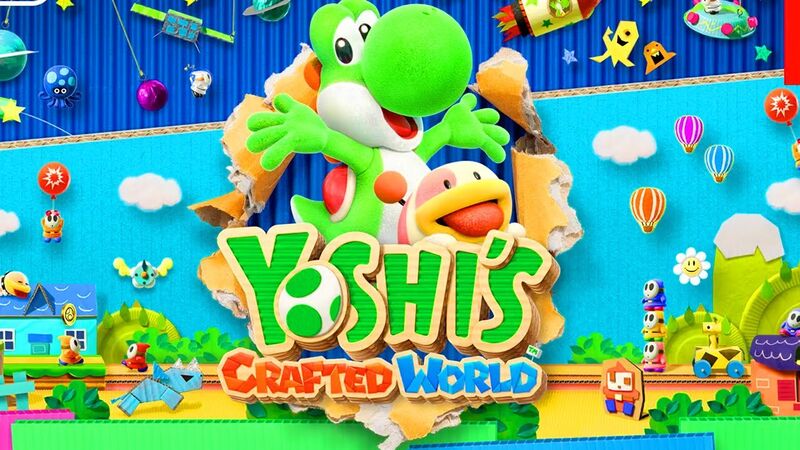 ‘Yoshi’s Crafted World’ Review: Pulling the Wool Over Your Eyes

Yoshi’s Crafted World is one of those games that immediately catches your eye. Brimming with an almost offensive amount of colour and charm, it looks like the kind of arts and craft utopia every child dreams of making…..but without all the screaming and mess. It’s an ode to recycling, a celebration of rubbish, a bric-a-brac kitbash. Elastic bands, push pins, curled paper cones and corrugated cardboard replace pixels and polygons, and best of all? The little crocheted creature in the middle of it all is you: surrounded by all these cast-offs, left to discover the joy in everyone else’s trash.

In other words, this time, Nintendo has cast its Willy Wonka magic on garbage, turning the offcuts of a primary school art lesson into a living, breathing world. Something about Yoshi’s Crafted World — realised in 720p on the Switch — imbues Yoshi’s island with more resplendent magic than its 3DS or Wii U predecessors. There’s more soul, more vibrancy, more charm. The secret sauce? This is the first Nintendo first party game to make use of Unreal Engine 4, and it shows.

Thanks to its mix of vibrant visuals and clever depth of field, this world looks so sweet it’s sickly at times, with billboards for fictional candy and breakfast cereals decorating the horizon, bottle cap boats and foil fish dressing the levels. But for all its creativity — for all the imagination that’s gone into making these Blue Peter diorama levels — unlike most Nintendo platformers, Yoshi’s latest adventure feels hard to love.

In many ways, Yoshi’s Crafted World is Nintendo by committee: a cutesy platformer guiding the player down linear paths in themed worlds with a token sprinkling of collectables hidden throughout each 2.5D level.

Thankfully, this crafted world is an incredibly endearing place to be. On your first run through any given zone, you’ll gawk and croon over the gorgeous little touches that make the area feel special. ‘Awh look, the Shy Guys are wearing sailor hats!’ or ‘that’s cute: the Mousers are playing with magnets!’ and it says a lot that this twee take on Mario’s rogue’s gallery never really loses momentum.

The same goes for the puzzling. Throughout the 20 hour run time, you’ll laugh, smile, chuckle and groan at the predictably wholesome puzzles developer Good Feel sends your way. Maybe you’ve got to figure out how to use your body weight to operate a lever, maybe you’ve got to stack swallow-and-spit items on top of each other, maybe you’ve got to find a hidden switch. Keep an eye on the foreground, background and sniff out hidden corners and you’ll breeze through 90% of the game no problem (and the other 10% might require some good timing).

These copy/paste puzzle solutions, on their own, are sort-of entertaining — the kinds of activities you give the kids on a hungover Sunday morning to keep them busy whilst you search for the paracetamol. They take enough low-key brainpower for you to distractedly pluck through, but it’s never enough to really get your head whirring.

The stop/start nature of the game doesn’t help: short levels and unskippable segues create a staccato rhythm that — when paired with shallow puzzling and simple platforming — fails to ever get in your head the way that recent, better platformers have done (Dead Cells, Hollow Knight, Shovel Knight, Celeste and Rayman Legends you can all take a bow – you may have ruined Yoshi).

This game isn’t aimed at mature audiences, though. We know that. It’s easy to be cynical about a game that’s even got a setting that ensures you pretty much can’t die. But even in some of the later levels — you know, where the game is supposed to get hard — Yoshi’s Crafted World fails to glue together a crafty challenge that respects the player’s time investment.

Shunting the game down to the easiest difficulty (Mellow Mode) gives you wings that allow you to float forever, and it feels like Nintendo could have taken advantage of that to let the latter levels spice up the vanilla platforming even a little. Collect-a-thons are all well and good, but even the checkbox structure of a game as wholesome as this becomes tired 20 hours in.

Disappointingly, even in co-op, the game doesn’t really change all that much — it’s just more of the same,  but with two people. Some levels might flow better when you’re working together (you can navigate vertical obstacles easier, or take on timed tasks quicker), but other than some incidental hilarity when you swallow each other or nick each other’s eggs… you don’t particularly get much more out of playing with someone else than when playing solo.

Yoshi’s Crafted World tries to jazz up the gameplay muzak by taking you out of the standard levels and dropping you into special ones every now and then. Maybe you’re operating a big vehicular Yoshi, maybe you’re fighting off a boulder-spitting bird, maybe you’re running an infestation of moles out of town. But even at the climax of these boss fights and mini-games, it still feels like you’re riding in the same old elevator and not getting anywhere.

Is Yoshi’s Crafted World any good?

Yoshi’s Crafted World is not a bad game. The ingenuity in how it shows off its world is consistently inspiring, and the way the developers have taken a box of odds and ends and somehow made a living, breathing world out of it cannot be praised enough.

The problem with the green dinosaur’s latest is, it just feels like all the good ideas were spent on the setting — and the developers had checked out creatively by the time it came to designing the levels. It’s a platformer by numbers, and if you strip out those lovely visuals and that inventive packaging it all comes in, it feels much like the colourful pieces that hold together its landscapes — recycled.

Yoshi’s Crafted World hasn’t done much wrong, but held up against the other better (cheaper!) platformers you can currently pick up on Nintendo Switch hardware, it’s hard to recommend. It’s charming, it’s sweet, it’s peddling a message of kinship and harmony… but it does it all so dryly.

Sorry, Yoshi – you’re a good boy, but you’ve got to learn some new tricks.