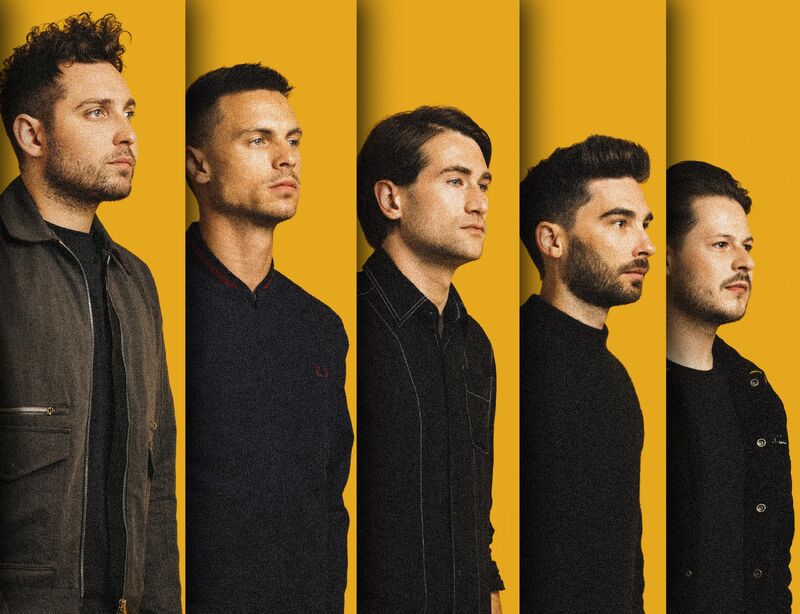 You Me At Six Talk Pokemon, Goldeneye & the Thrill of Being on Game Soundtracks

You Me At Six are very good at videogames. This writer can testify as much, having once played, and been roundly humiliated by singer Josh Franceschi during a game of FIFA in the not too distant past. They’re also pretty good at music. Now well into their fourteenth year of existence, the Weybridge band have just released their sixth album, VI.

You might have heard their most recent single, Back Again, electrifying daytime radio. It’s kind of like what might happen if Justin Timberlake got into pop-punk and it’s exactly the sort of song You Me At Six should be writing in 2018.

Despite dedicating their time to touring and honing their craft, videogames also play a crucial part in the existence of the band. Friends since “forever”, before there was You Me At Six there was Goldeneye on bassist Matt Barnes’ N64. “No Oddjob,” says guitarist Chris Miller. “You might as well just admit you were cheating if you played as Oddjob.”

You Mon At Six

They were crazy about Pokemon, too. “Red was the one,” says Matt. “Pokemon Red on the GameBoy was an absolute obsession for me, as I think it was a lot of people my age. When Pokemon Go came out, we were going up to London for meetings and photoshoots all the time, and some of us would be glued to it around the clock. We’d be in cabs asking the driver to go in  different directions to catch Pokemon. It all got a bit silly at one point.”

“For me, Pokemon is my childhood,” says Chris. “If I play it, I’m instantly pulled back into being a kid. It all comes flooding back. It’s such a nostalgic experience for me. It’s so cool that they keep refreshing it for different generations. Everyone should have the chance to feel like I did about Pokemon.”

“Another huge game for me was Counter-Strike,” says Matt, getting dewy-eyed at the memory. “I was in a clan with my cousin and my friends. I remember my mum shouting up the stairs telling me that dinner was ready, and me just being so frustrated, like, ‘mum, you don’t understand. I can’t pause it. There are much more important things happening right now than dinner…’

You Me At Switch

And here’s the thing with videogames, if you play enough as a kid, adulthood isn’t really a good enough excuse to stop. If you’re in a band with the same people you played so many hours with at such a fledgling age, you certainly don’t. And, if you grow up to be in a band with said people – a profession which, for all its highs, also contains an awful amount of time sitting on your arse, waiting, not having anything specific to do – well, you get where we’re going with this…

“On tour, we try to make sure we’re playing games we can all get involved in,” says Chris. “Call Of Duty is a bit of a go to. Zombies. We’ll play a lot of that. FIFA is big, obviously. Unless you’re in your bunk, then you can do what you want. Matt spends a lot of time in his bunk playing his DS…”

“And I’ve got pretty crazy on my Switch,” says Matt. “I’ll play everything on it. I’ve been playing a lot of Skyrim lately, I completed Zelda, I play Mario-Kart a lot. I am so unbelievably excited for the new Super Smash Bros. The Switch is an absolute gift to touring, to be honest…”

“I spend quite a lot of time watching Matt play his Switch to be honest,” says Chris. “I don’t have one…”

Save it for the tourbus

If Mr. Shuntaro Furukawa is reading this, you know what to do. Not that the band haven’t bought their fair share of consoles. “If we’re recording in the states, literally the first thing we’ll do is go to the shop and buy an Xbox for the communal area,” says Chris. “We’ve bought a lot of Xboxes. We don’t tend to take our own consoles out, because if you hire a tour bus, they normally come with one installed. For years we’ve been talking on getting one of those Peli Cases, with a console fitted and a screen. We borrowed one from Bullet For My Valentine once and it was ridiculous. It had these ridiculous studio speakers in it. It had an Xbox One and a PS4 in it. You can’t really go back to playing games on tour in the way you were, after that.”

“We’ve been on FIFA, DiRT, I think we might have been on the first Forza Horizon,” says Chris. “Normally racing and sports games. It’s a really cool feeling. Back in the day, I used to think that if a band was on the Tony Hawk Pro Skater soundtrack, they were a proper band, so it’s a bit like a badge of honour. I discovered tonnes of music I loved via those soundtracks. Alien Ant Farm, Goldfinger… Sometimes I’d put that game on in the background when I was doing something. Not to play, but just to listen to the soundtrack…”

And with that, the band retire to the real world, a world of tuning guitars and breaking strings, service station stopovers and Ginsters pasties. Somewhere Josh Franceschi is schooling someone in FIFA. This is normality. But maybe someone, somewhere, is listening to a videogame soundtrack and investigating the back catalogue of the band they’re enjoying. Maybe that band they like is You Me At Six. Maybe they go onto form their own band. Maybe we do this same feature but with another band in ten years’ time… Until then!