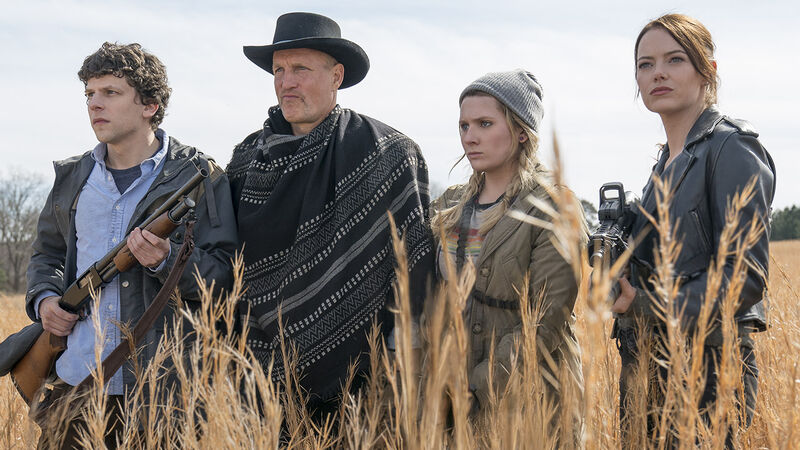 ‘Zombieland: Double Tap’ Writers on a World Where Pop Culture Stopped in 2009

It’s been a full decade since we last saw them, but the entire Zombieland gang – Woody Harrelson, Jesse Eisenberg, Emma Stone, and Abigail Breslin — are finally back together, as the long-awaited sequel Zombieland: Double Tap opens in theaters this weekend.

The reunion is not only onscreen, but behind the scenes as well, as the first film’s screenwriters, Rhett Reese and Paul Wernick, and director, Reuben Fleischer, also return for another R-rated comedic story set in a zombie-plagued America.

So after so long, what changed to finally get the sequel made, and how did the ten-year break change the depiction of life in Zombieland – and how did it not?

Fandom went straight to the source and spoke to Reese and Wernick about Zombieland: Double Tap. The two discussed getting the band together, a notable new character, and more – including the future of Deadpool (the other big R-rated comedy/genre franchise they write) now that Kevin Feige and Disney control that property.

If you have a hit movie, most of the time, you’ll get a sequel within two or three years. But while talk of a Zombieland sequel began almost immediately after the first film’s success, it never seemed to actually off the ground.

As far as whether they began to feel it just never would happen, Wernick remarked, “I think we had always been consciously optimistic but the key to staying sane is keeping expectations in check. With the cast going on to what they’ve become and everyone’s schedules so busy, including ours, we had given up hope a little bit. I hate to say that because we never want to admit to giving up hope but it was a labor of love for a long, long time and ten years is a long time to be pining for something. But ultimately that pining paid off because it was the love of the first movie that we all had and the love of each other that really brought us all back together. But it came together two and a half three years ago and we thought ‘Oh my gosh, we actually could be making this thing!’ It was a great thrill and one of the great moments of our careers.”

So what changed? Explained Reese, “It was an email from Woody Harrelson. Woody is very protective of what Zombieland was and didn’t want to just do it as a money grab or do it just to do it. He wanted to make sure it was good and felt like a second episode to the Zombieland saga. As such, he was not easy to convince to get on board. And not in a bad way but in a good way. His standards were quite high. And he sent us this email that said ‘I think you guys have finally cracked it’ – in other words that the script was in a place that it was worthy to have that sequel stamp put on it. When we got that email we felt like ‘Oh, this could really happen’ because we suddenly got similar emails from Jesse and Emma and the ball was rolling. And the momentum didn’t stop after that. The studio was incredibly supportive, even though this thing had begun under another regime, Tom Rothman was amazing and he stepped up and so did Gavin Polone, our producer. He’s a pitbull, so you get a group of people who are that passionate about something, it got momentum and it finally happened.”

In the first film, the zombie outbreak was a relatively recent occurrence, but Double Tap acknowledges that ten years have passed. Regarding their approach to how much the world had changed, Reese said, “We were operating on multiple fronts. We wanted to make sure the zombies had evolved and our characters’ relationships had evolved and the world looked more destroyed. The world was definitely more overgrown and decrepit and run down than it had been. We wanted to make sure those years were accounted for in specific ways.”

On the other hand, one amusing aspect of the film is remembering that for these characters, society – including pop culture and notable technological innovations – ceased to keep moving forward a decade ago.

As Reese put it, “We have the benefit of the fact that because the post-apocalypse struck in 2009, there was no evolution of pop culture references or those kinds of things. We were trapped in time in a way, which allowed us to rely on a similar sense of humor and similar lingo. It didn’t require us to update the world the way the actual world had updated in those intervening years. And we have fun with that. The Uber joke is a great example. One of our characters is basically creating Uber. She’s not the smartest person and everyone is booing it, not realizing that that’s exactly what happened [in the real world] in the intervening ten years. So I would say all kinds of thought was given just to that particular issue.”

Of course, one risk of having fun with the lack of pop culture progression is the risk of screwing up, as even including a reference from 2010 wouldn’t make sense. Said Reese, “We had to watch for that. And the music in the movie is all from that period or before. We had a moment where Avan Jogia [who plays the new character Berkeley] used the word ‘whack’ and it didn’t make it into the cut. He uses the word whack and Wichita says ‘Just because there haven’t been any new words invented since 2009, doesn’t mean we have to use all the old ones.’”

The aforementioned character who comes up with the idea for Uber is Madison, played by Zoey Deutch, in a sublimely funny and scene stealing performance.

Madison could safely be described as a ditzy blond, but it’s to Zombieland: Double Tap’s credit that she doesn’t feel like a copy of previous versions of that archetype and delivers some of the funniest moments in the movie.

Said Wernick, of Madison being so well received, “Well, it’s just pure talent on Zoey’s part. In the wrong hands, that character as written could have been supremely annoying and the audience could have been completely turned off every time she shows up on screen but she brings this energy any time she shows up and the audience gets giggling. She says things that aren’t even funny that the audience laughs at because she’s so talented. Again I think Zoey and the character has this vulnerability and yet she’s dumb like a fox. And she’s strangely optimistic. She’s stupid but she’s optimistic. She’s this real breath of fresh air for our characters and the audience watching it. It’s a delicate balance to bring in new characters when you have such a beloved core cast. A lot of times it can be like ‘Get back to the people I know and love!’ So to introduce these new people into the world is always difficult and it’s always finding the right balance and the right actors and the right words to put into their mouth. She’s an elevator. Everything she does she makes better than what’s on the page. We benefit greatly off that.”

According to director Ruben Fleischer, Emma Stone has said they should make a Zombieland movie every ten years. So could we see Zombieland 3 in 2029?

Said Reese, with a laugh, “Ten years is a long time to wait,” noting they waited six years for their first Deadpool script to be produced. He added, “We’re not really prepared for another ten-year wait. But if that’s what it took, absolutely. The actors don’t seem to age, physically! Woody feels exactly the same. Only Abigail aged… because she grew up! They seem to be fighting time pretty well, so if they can do it then why not?”

DEADPOOL WILL BE BACK… EVENTUALLY

Of course, the other big question Reese and Wernick have on the sequel front is when Deadpool 3 might happen. With 20th Century Fox now owned by Disney, the franchise is now under the purview of Marvel Studios mastermind Kevin Feige, though the plan is for Ryan Reynolds to continue on as the character – the actor got attention this past week tweeting about a visit to Marvel Studios – and for it to remain R-rated.

As for when we might finally see Deadpool’s return, Wernick said, “Kevin Feige has so much on his plate and he is the master of the universe. When Kevin says it’s time, it’ll be time. That may be a year from now, it may be six months from now, it may be three years from now. He doesn’t make a wrong move so whatever decision he makes will be the right one. Again, we’re ready to snap to it whenever Ryan gives us that call and says ‘Let’s go.’ And that’s also about finding the right idea and how that fits into the larger MCU universe. It’s a little more complicated than when we were at Fox, but we’re happy to be part of the MCU now and whatever Kevin says, we do.”