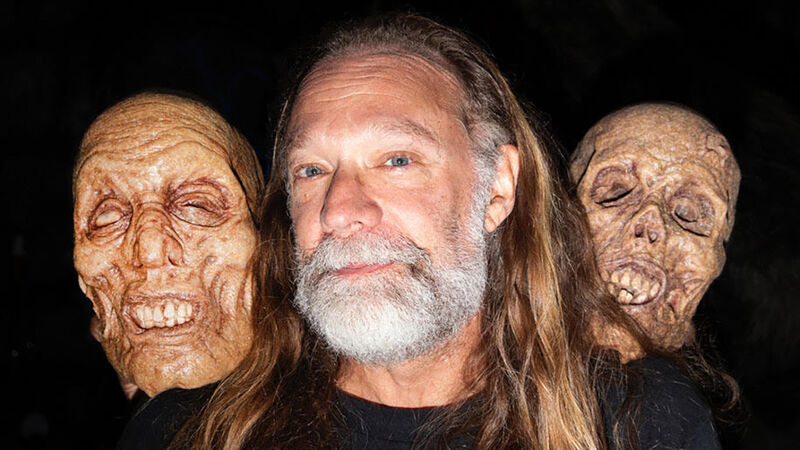 To hear special make-up effects legend Greg Nicotero tell it, his TV reboot of the Creepshow franchise was fated right from the start. The Shudder horror anthology series — which has been re-airing on AMC after is debut last fall and is now out on Blu-ray and DVD in a new Season 1 collection — started life as a 1982 film from iconic Night of the Living Dead director George A. Romero, with a script by Stephen King. Romero was an early mentor to Nicotero and, in fact, a young Nicotero even visited the original Creepshow‘s set before the two began collaborating professionally with Day of the Dead.

While guesting on our new interview series Hey, Fandom!, Nicotero spoke to us about sharing Romero’s work with a new generation of fans, and how everything came together at once to make the new series happen, with Nicotero ultimately serving as an executive producer and directing a couple of segments.

“I’m very much about things lining up, and this weird twist of fate,” he said. “For for me to be able to continue George’s legacy, for somebody who did so much for me and so much for people, I felt like it was something that was kind of destined to happen.”

It wasn’t just the Romero connection that inspired this new take on Creepshow. Another strange coincidence involved Craig Engler, whose short story “A Dead Girl Named Sue,” from the book Nights of the Living Dead, had so entertained Nicotero during a long flight back to the U.S. from Australia that he was hoping to option it to adapt as a short.

Nicotero has worked on AMC’s The Walking Dead from the start and recalled that as he looked at optioning “Sue,” he was told, “Craig happens to work at AMC, for Shudder.” Nicotero said he replied, “Wait, my AMC?! We work for the same company!”

As it turned out, not only were Nicotero and Engler already both working for AMC, but Engler and his producing partner were already working on a project involving a certain George Romero classic, with Engler telling Nicotero, “It’s interesting that you would reach out, because we’re in the process of trying to secure the rights to remake Creepshow,” and asking him if he’d like to partner with them, which he was more than happy to do.

Nicotero then helped bring the project to AMC, recalling, “The next thing you know, they greenlit the show. It was one of those weird Hollywood stories where everybody was kind of circling one another just close enough that it all came together.”

Though Nicotero has been making epic-scale horror TV for a decade now on The Walking Dead  — he serves as special make-up effects supervisor, executive producer, and the most frequent director on that series — bringing the world of Creepshow back to life still turned out to be a significant challenge.

“I had no idea what I was getting myself into when we started Creepshow,” Nicotero told us. “I’d spent 10 years on Walking Dead where we had the same sets, the same actors for the most part. It’s not an anthology. When you’re doing an anthology, every three and a half days, we were creating a new universe; new sets, new writers, new director, new actors. I hadn’t taken that massive challenge into consideration.” He added, “It was really difficult. There were a lot of really hard days.”

While some challenges were more budget-based — a planned adaptation of Stephen King’s story “Survivor Type” had to be scrapped in favor of the more grounded and easy-to-shoot King tale “Grey Matter” — Nicotero also felt huge pressure to get things right, on behalf of the fans.

“Everyone was gonna watch Creepshow and compare it to the original, and if I didn’t deliver, then I would have in some capacity soured the legacy of George Romero,” he observed. “So I really felt like I had a lot riding on it and I put everything I could into it.”

“It’s different when you have a character that will shoot over three days,” Nicotero observed, of getting actors like Esposito, David Arquette, Tricia Helfer, and DJ Qualls to appear in Creepshow segments. “You’re not really asking for ‘Listen, I need six months.’ You’re saying, ‘Hey, fly to Georgia. It’ll be fun! It’s only a couple of days!’”

One Creepshow segment, in particular, based on the short story “House of the Head,” centers largely on a young girl, and Nicotero immediately knew that Cailey Fleming — who plays Judith Grimes on Walking Dead — would be ideal for the role. “I remember everybody looking at me like ‘Where did you find this girl?’,” Nicotero recalled. “You look at her face and it’s like you can see into her brain. You can see every amount of emotion that she’s expressing instantaneously. I felt really lucky that we had her.”

Nonetheless, there were apparently a few huge names on his “to call” list that didn’t end up in Season 1.

“At one point, I had spoken to Simon Pegg and Josh Brolin and Aaron Paul,” Nicotero recalled. “There were a lot of cool people that were like, ‘Listen, if I wasn’t shooting this thing called The Avengers, I would be there.’ And I was like ‘Oh yeah.’”

We’ll have to wait a bit longer to find out who might appear in Creepshow in the future — the series was about to begin shooting Season 2 when production was shut down due to Covid-19 — but Nicotero is eager for audiences to see what he and his collaborators have in store.

BRINGING BACK THE DEAD

Of course, Nicotero’s OTHER big TV project — AMC’s The Walking Dead — remains in a kind of stasis as well at the moment. The Season 10 finale has been filmed, but post-production was still ongoing when the coronavirus pandemic broke out. While the rest of the season aired, the finale has been shelved temporarily until work can be completed, a situation that has proved frustrating for Nicotero, who directed the episode.

“It’s one of my favorite episodes of the season,” he told us. “It tees us up so well for Season 11 that it’s a little agonizing for me to not be able to talk about it. The last two minutes of the finale are gonna just… people’s jaws are gonna drop.”

According to Nicotero, the finale picks up right where we last left the group, with Beta and his horde of zombies encircling our heroes. “Our group is now having to deal with this giant, massive [horde]… thousands of zombies surrounding where they’re safe,” he recalled. “There’s a lot of character storylines [where] you get little bits of information here and here, but you want to end that chapter and then start the next chapter in the finale. So we address lots of stuff with Daryl, Negan, Beta, Carol… There’s always that challenge of pushing the visuals and pushing the story and pushing the emotion.”

Nicotero also pointed out that the Season 10 finale reintroduces a beloved, classic Walking Dead character back into the mix, as Lauren Cohan’s Maggie Rhee finally returns.

“[Lauren] and I went back to Season 2 together,” Nicotero said, when asked about Cohan returning to the series. “I had worked with her a lot. I think we were both had this nervous excitement about getting a chance to film again. After we had shot the first scene, it was like no time had passed.”

Without revealing TOO many details, he did give us some sense of what to expect from Maggie as the show moves into its 11th season.

“You found out, at the beginning of Season 10, that there were letters being written back and forth between Maggie and Carol, and the different communities,” Nicotero noted. “When Maggie reads one of these letters, and realizes what has been happening to her friends and their community, that sort of activates her.”

IT’S SO HARD TO SAY GOODBYE

Naturally, as with every Walking Dead season, the new episodes are nearly guaranteed to feature some unexpected and tragic send-offs. (“Dead” is, after all, right there in the name.) With the show having veered off so wildly from the storyline of the source material at this point, even long-time readers and hardcore fans can never be certain what to expect.

“The fans have a voice, and they’re very passionate about the show,” Nicotero told us. “There are times when you have to manage future storylines and storytelling and then there are other times when it’s important to stay true to the source material. The fans may not understand what the intent is or they may not like it, but unfortunately, there are situations where, you know, characters are set up and that was the intent. They’re going to be here for this amount of time and then they’re going to go away.”

On the plus side, Nicotero noted that – even when fans have to say goodbye to beloved characters – the actors behind those characters tend to jump into other hot pop culture properties.

“The cast continues to evolve and change,” Nicotero noted, before specifically shouting out TWD vets Sonequa Martin-Green and Jon Bernthal. “The good news is, for most of the actors on our show that have been killed off, then they became the commander of a starship or become the Punisher. Actors have gone on to do some unbelievable things.”

Finally, we got to pick our special guest’s brain about the origin of our modern pop culture fascination with zombies and the apocalyptic threats they pose. He thinks video games should get most of the credit (or blame, depending on your personal feelings).

“You’ve got to have good characters and a good story but the invention of the shooter game introduced the zombie genre to a younger audience,” Nicotero told us. “Between Resident Evil and House of the Dead, you had a lot of people playing games where you shoot a lot of zombies, and then all of the sudden you have the Dawn of the Dead remake, Land of the Dead, 28 Days Later – you have all this zombie material. But I think a tremendous amount had to do with the games.”

Creepshow Season 1 is now on Blu-ray and DVD.

Check out our full Hey, Fandom! chat with Greg Nicotero below!