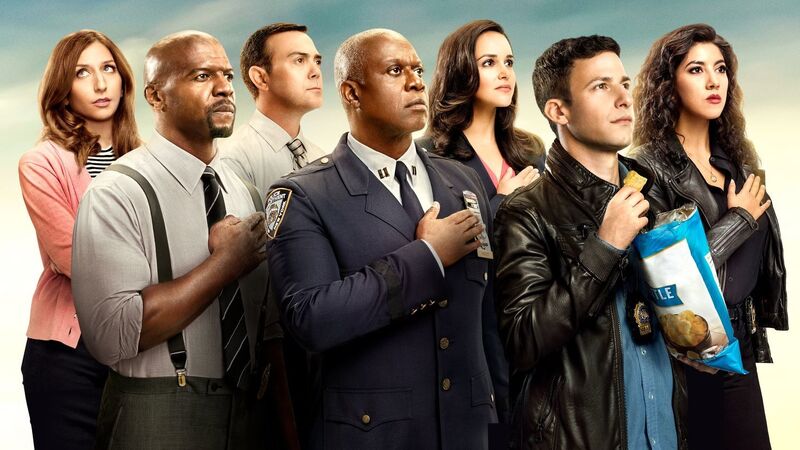 There was a time – fairly recently, in fact – when we thought we’d had all the Brooklyn Nine-Nine episodes we were ever going to get. In May 2018, it was announced that the cult television series had been cancelled by Fox, as the network was “trying to create a more cohesive program, and scheduling [it in] would prevent [them] from promoting something new.”

At the time, Dana Walden, Chairmen and CEO of Fox Television Group, told Entertainment Weekly that “with Thursday Night Football, there were two fewer hours to program” and that ultimately, they decided they just didn’t have room for it anymore. Fans took to social media to share their devastation, as did several cast members including Melissa Fumero, Joe Lo Truglio and Stephanie Beatriz. But their sorrow was short-lived. Thankfully, the show was picked up by NBC just a day later.

If the few hours in which we believed Brooklyn Nine-Nine was over forever taught us anything, it’s just how great this cop comedy is. So ahead of the newly homed show’s sixth season kicking off in early January, we take a look back at 10 of the best episodes. So far, that is…

In “The Swedes,” Jake Peralta (Andy Samberg) and Rosa Diaz (Beatriz) catch a dockyard thief who stole expensive jewels, and due to their origin, two Swedish detectives visit the precinct in order to pick up the 39-carat diamond and the suspect.

The two officers, played by Anders Holm and Riki Lindhome, are extremely close as work partners, causing Jake and Rosa to question their distance and if that makes them unprofessional. That feeling gets amplified when the foursome is assigned a case to work together during their stay.

The episode is full of great one-liners, as the Swedes rip it out of their American counterparts and they attempt to snap back. But it’s also brilliant because it allows the characters to play up their most defining qualities; Rosa, being awkward; Jake, trying to overcompensate; and Amy Santiago (Fumero) and Terry Jefford (Terry Crews) being lovable nerds as they help administrator Gina Linetti (Chelsea Peretti) study for an upcoming test.

It’s fair to say that when it comes to holiday-centric episodes, Brooklyn Nine-Nine always nails it, but it seems that its Halloween-based outings are the best. As always, “HalloVeen” sees the squad take part in an annual heist — this year, the aim is to retrieve a belt (or cummerbund, as Holt likes to describe it) that declares the winner an ‘Amazing Human/Genius.’

Their antics, as you might expect, are over-the-top and hilarious, like Amy, Jake and Holt admitting to putting GPS trackers in Terry’s yoghurts in the run-up to the heist and Boyle teaming up with Rosa as part of an underdog alliance. But this episode is even more special than most Halloween episodes because this time, Jake has rigged the game. Not to win, but to propose to girlfriend Amy.

Amy has no idea, and neither does the audience, and it makes for such a touching moment. As hilarity falls by the wayside and Jake tears up while telling Amy he ‘loves her butt,’ you can’t help but swoon over those adorable, loved-up dorks.

To steal a well-known phrase from protagonist Jake, Brooklyn Nine-Nine‘s third season has a ‘butt-load’ of excellent episodes and “Yippie Kayak” is up there. It’s Christmas-based and revolves around Jake – having forgotten to buy buddy Charles Boyle (Lo Truglio) a present – drags Gina along to a store in the middle of the night. Annoyingly, Boyle decides to tag along, unaware of the real reason the twosome are heading out.

While in the store, the trio discovers that it’s being robbed by a bunch of criminals who are holding several customers hostage. Jake, inappropriately excited that the situation resembles his favourite movie Die Hard, takes things into his own hands to take the thugs down, with Terry’s help from the outside.

While all of the Brooklyn Nine-Nine characters are beloved among viewers – how could you not love every one of this ragtag bunch of misfits? – Holt is undoubtedly a fan favourite. So any episode that revolves him, and his relationship with the rest of the Nine-Niners, is a good one.

This one sees Jake, Amy and co attend the notoriously private Holt’s birthday party. There, Terry gets increasingly stressed out when he’s tasked with reining everyone in. Amy tries to find out whether her boss makes his own hummus, Gina draws the attention of psychologists with her candid confessions, Boyle bonds with a female guest over culinary chat and Jake attempts to impress Holt’s husband by pretending to have read an intellectual ‘New Yorker’ article – none of which goes down well.

It’s chaotic, comedic and even sweet, proving that the ensemble episodes are some of the most enjoyable.

Guest stars can often make or break an episode of any television series – the key, particularly when it comes to comedies is finding someone who gets the humour of the show they’re appearing in and isn’t interested in stealing the limelight necessarily. That’s why Sterling K Brown, who acts as the perfect scene-partner to Samberg and Braugher in “The Box” is perfect.

In the episode, he plays Philip Davidson, a shifty dentist who gets brought in for questioning following the mysterious death of his practice partner. Much to Holt and Jake’s surprise — the detectives tasked with interrogating him overnight — Philip has all the answers and as the pair try all different kinds of strategies to trip him up, they’re the ones that get the most rattled.

It’s a fast-paced episode that benefits from concentrating on just two characters and is filled with sharp one-liners and a surprising amount of heart too. One of the most prominent threads of Brooklyn Nine-Nine is how much Jake wants to prove his worth to Holt and this installment addresses that in a great way.

Brooklyn Nine-Nine has a plethora of recurring characters from Rosa’s unstable lover Adrian Pimento to Major Crimes officer Keith Pembroke AKA The Vulture, but one of the show’s best is definitely Doug Judy, who is often referred to as the Pontiac Bandit. Why? Well, because he’s famous for stealing more than 200 Pontiac cars, of course…

In this episode, Jake wins tickets to go on a cruise and invites Amy to spend the vacation with him. He’s planning a week of relaxation while she’s intent on doing all the activities the holiday can offer, but their (very different) plans are thwarted when they realise that Judy is the ship’s entertainer. Turns out, he was the one that got them there in the first place because he believes he’s the target of a hitman, hired by his former boss.

Bringing Jake and Amy together romantically is one of the best decisions Brooklyn Nine-Nine writers ever made as they bounce off each other so well, in both funny ways and sweet ways. It’s great to see them flex that here.

After their lives are threatened by mob boss and murderer Jimmy ‘The Butcher’ Figgis at the end of Brooklyn Nine-Nine‘s third season, Jake and Holt are put into the Witness Protection Program and relocated to Florida. The first few episodes of Season 4 are all about them trying to adjust to their new lives – (something that Jake, in particular, struggles with) – while also trying to work out where the elusive criminal who forced them there is.

Every instalment in the trio of episodes is hilarious, giving viewers great gags — from Jake’s highlighted hair and mini-breakdowns to Holt’s relentless pursuit to become assistant manager at this new job. Maya Rudolph also features in a brilliantly funny cameo as a US marshal who coaches the former 99ers on their assumed identities.

While the first episode centres entirely on Jake and Holt, the follow-ups take us back to the precinct, where the likes of Amy, Terry and Boyle are trying to adjust to their inept new commander. The laughs just keep on coming!

Brooklyn Nine-Nine season finales usually revolve around some moment that moves the story along significantly rather than the jokes. That doesn’t mean they’re not hilariously funny – heck, they always are – but they usually have a little something more meaningful going on. And when it comes to game-changing moments, “Johnny and Dora” is a doozy.

In it, Jake and Amy go undercover to catch an identity thief. During their mission, the former reveals that he has been intending to ask the latter out on a date for a while but was put off by her previous declaration of not wanting to date a cop. While pretending to be a newly-engaged couple in a restaurant though, the pair realise just how romantically interested they are in one another. The episode ends with them sharing a smooch, kicking off an interesting storyline that will inevitably carry into Season 3.

Elsewhere, Holt comes toe-to-toe with his rival Madeline Wuntch, resulting in her threatening to disband his colleagues at the 99. To stop her from doing so, he agrees to be transferred to a different precinct, along with Gina. Talk about moving the goalposts!

As its a comedy show, Brooklyn Nine-Nine episodes are often understandably judged on how funny they are but the series certainly doesn’t shy away from addressing things that are more meaningful than punchlines.

Continuing themes carried over from the previous episode, where Rosa came out as bisexual to the Nine-Nine squad, “Game Night” sees her turn to Jake for advice on how to tell her parents, and then to Holt when things don’t go down as well she’d hoped. It’s a great way to showcase just how supportive these characters, that we’ve grown to adore, are of each other and it’s such a treat to see Beatriz – who identifies as bisexual, elevating the poignancy of the storyline – able to show a more vulnerable side to the emotionally shut-down Rosa we’ve come to expect.

It’s also the first episode for a while when the whole gang star, which is a welcome breath of fresh air!

Is there anything better than watching Jake squirm in impossibly awkward situations? True Brooklyn Nine-Nine fans are likely to think not, which is why “Mr. Santiago” is among the show’s best. It sees Samberg’s character try to impress girlfriend Amy’s father during a Thanksgiving visit – a task that proves challenging as he’s an uptight ex-cop who arranges the banknotes in his wallet according to serial number.

He researches Mr. Santiago (Jimmy Smits) ahead of time, which makes things easier but wowing him becomes tricky when he brings him back to Amy’s home, where his colleagues are squabbling over whether or not to kill the turkey they were planning on eating. And if that’s not dramatic enough, Santiago and Jake set out to solve one of the former’s unresolved cases mid-dinner – which, surprisingly, helps quell the escalating tension between the pair.

Elsewhere, Holt helps Adrian come to terms with no longer having a job in the NYPD. It’s an episode that manages to cram a hell of a lot into 22 minutes and it’s fun, sweet and memorable too!

Brooklyn Nine-Nine returns for Season 6 in the US on January 10, 2019. The UK premiere is yet to be announced.

Amy West
Amy West
Freelance film and TV writer and self-confessed screen addict. Loves fantasy and horror but is a sucker for tragic romance and musicals too.