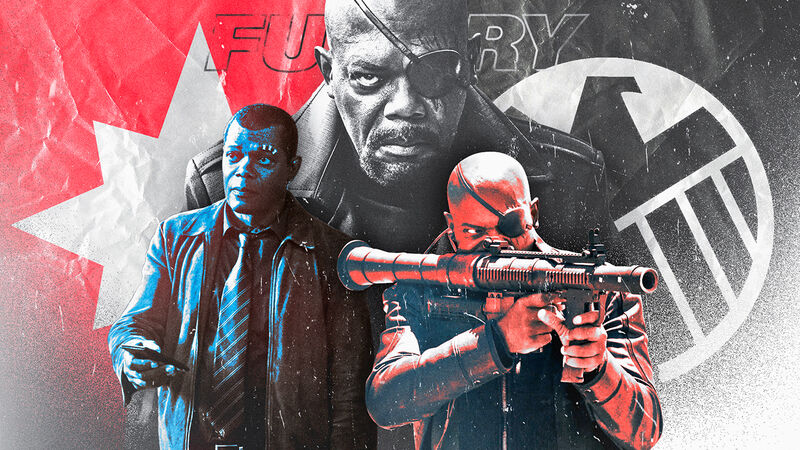 SPOILER WARNING: The following article contains SPOILERS for Captain Marvel. Proceed at your own risk.

Nick Fury has always been a man of secrets, but the newest Marvel Cinematic Universe release, Captain Marvel, offers a notable amount of new info about the SHIELD spy.

In the 1995-set film, we meet a younger Nick Fury, during a time when he is not yet Director of SHIELD and still skeptical about alien life until it’s right in front of his (two!) eyes for the first time.

What Other Superheroes Were on Nick Fury’s Radar Before Iron Man?

It turns out it was Nick Fury meeting Captain Marvel that inspired him to begin the Avengers Initiative, but it would then be 13 years before we see him approach a potential recruit when he introduces himself to Tony Stark in Iron Man. So did no actual candidates come on the radar, or were there some, but they didn’t work out, for whatever reason? After all, when Fury first appeared in Iron Man, he told Tony, “You think you’re the only superhero in the world?”

Perhaps the explanation is that there were some other superheroes but they simply weren’t Avengers material. As Clark Gregg recently told Fandom, while musing about the years following the events of Captain Marvel, “What kind of horrible superhero dates have [Agent Coulson] and Nick Fury been on with various clowns and clownettes from around the globe claiming to have powers?”

Did Nick Fury Plan on Black Widow and Hawkeye Being Avengers?

This is something we could ponder since The Avengers, but Captain Marvel puts it in mind again by seeing how early the Avengers Initiative began. Nick Fury had two future Avengers right under his nose before he spoke to Tony Stark, in the form of SHIELD agents Clint Barton and Natasha Romanoff. While both were clearly highly skilled, did Fury always see them as possible Avengers recruits, or was it simply happenstance that they became full members of the team during the events of The Avengers?

Given Fury never raises any objections to their inclusion on the team – and had Natasha actively involved in Stark-related matters going back to the events of Iron Man 2– it seems likely he did consider them potential members. Though one then has to wonder if there were others among the SHIELD ranks he also saw as possibly ending up on the team or if Hawkeye and Black Widow simply stood out above the rest…

What was Nick Fury Doing with the Tesseract all Those Years?

In Captain Marvel, we learned that Nick Fury and SHIELD gained possession of the Tesseract in 1995. Barring any additional revelations about them losing it at some point in the interim, that means they held onto it for the next 17 years until Loki stole it in The Avengers. We first learned Fury and SHIELD had the Tesseract in Thor when Fury asks Erik Selvig to begin testing it to try and tap into it as a power source. But what was he (and SHIELD/Project PEGASUS) doing with it all that time? They already knew its tremendous power potential thanks to Fury’s adventure in Captain Marvel – even simply trying to finish Wendy Lawson/Mar-Vell’s light-speed attempts would be a worthwhile endeavor. Were earlier tests done on it that failed? Or was the Tesseract simply set aside, Ark of the Covenant style, until the arrival of the Asgardians and the Destroyer in New Mexico led to rising concerns and the decision to try and use it?

Also, while Selvig is a genius in his own right, what about folks like Tony Stark, Bruce Banner, and Hank Pym, some of whom already had their own serious SHIELD connections? Were any of them ever considered or approached about helping SHIELD with the Tesseract prior to Selvig, and if not, why not?

Why Did Nick Fury Wait So Long to Use Captain Marvel’s Pager?

Ever since fans saw the post-credit scene of Avengers: Infinity War, there’s been some questions about the pager Nick Fury used that Captain Marvel has only honed in on more. At the end of Captain Marvel, Carol Danvers leaves Fury with a very amped up pager he can use to contact her across the galaxy, telling him only to use it only in an emergency. And certainly, Fury using it as half of all life vanished thanks to Thanos was a reasonable emergency… but weren’t there other times that would also qualify? The attack on New York by Loki and the Chitauri, which first brought the Avengers together, feels like a situation that would have been worthy, amongst other crisis.

So why didn’t Fury use the pager that entire time? According to Marvel Studios President, Kevin Feige, the answer might be that he did use it. She just didn’t answer.

Feige recently told Slash Film, “How do you know he never hit it? How do we know he never pushed it before? We’ve never seen him push it before. That doesn’t mean he never did.”

So perhaps Captain Marvel might have a little explaining to do in Avengers: Endgame about what kept her from returning during previous times she was sent the signal.

Was Nick Fury Lying to the Avengers About Previous Alien Encounters?

Another question being considered even before Captain Marvel opened was a potential contradiction based on the film’s Kree and Skrull-backed storyline. Hadn’t Nick Fury said in The Avengers that it was the Asgardians’ arrival in New Mexico in Thor that alerted them to alien life and led them to use the Tesseract to create weapons? But how does that make sense now that we know Fury himself met aliens long before and, in fact, alien contact is the reason he even had the Tesseract?

However, looking back at exactly what Fury said in The Avengers, there’s a bit of wiggle room there. Fury’s initial quote is:

“Last year, Earth had a visit from another planet that had a grudge match that leveled a small town. We learned that not only are we not alone, but we are hopelessly, hilariously outgunned.”

At first glance, it essentially sounds like Fury is saying “This is how we learned we’re not alone.” However, it is worth noting that Fury goes on to tell Thor:

You have to do some notable dot connecting, to be sure, but this could all be read – in retrospect – as Fury saying, “Yes, we already knew there were aliens, but this reinforced just how outmatched we are and underlined that there are multiple threats, including various alien ones.”

Is it a stretch? Maybe a bit. But it pretty much works.

Keep in mind, Nick Fury is skillfully secretive and manipulative to the point that he didn’t hesitate to add some blood to Phil Coulson’s trading cards to get Steve Rogers and Tony Stark to do what he needed them to do for the greater good in The Avengers. So sure, it’s probably natural for him to play little fast and loose with his alien knowledge too. After all, thanks to Captain Marvel, we know that when he told Steve Rogers, in Captain America: The Winter Soldier, “Last time I trusted someone, I lost an eye,” he was talking about an alien that looked like a cat  (who was relatively friendly to him, despite that unfortunate eye incident). But that betrayal line sure sounded like a better justification to be keeping secrets from even Captain America, right?