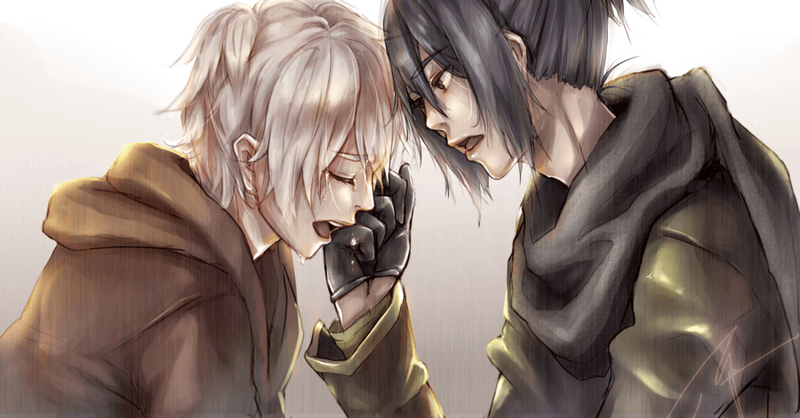 LGBTQ anime isn’t a new genre. Yet many titles within the genre don’t focus on the daily struggles that people in the LGBTQ community go through. However, there are some anime that focus on gender identity, LGBTQ relationships, or sexual orientation – either as a backstory or major plot point – in a more respectful way. Here are nine anime titles that do just that.

No. 6 takes place in and around a seemingly utopian city called No. 6. On Shion’s 12th birthday, he finds an injured young boy named Nezumi, aka Rat, in his room. After nursing Nezumi’s wounds, Shion finds out that Nezumi is an escaped prisoner. Unwilling to give up Nezumi’s whereabouts – due to an unexplainable bond between the two – the government strips Shion’s privileges and banishes him and his mother to the lower levels of the city.

Four years later, the two meet again, but this time, they are about to embark on an adventure to uncover the secrets of No. 6.

Although the series centers around the city’s secrets, the anime also sheds light on gender identity and the close relationship between the two boys.

Sweet Blue Flowers tells the story of Fumi Manjōme, an introverted, intelligent teenage girl dealing with a bad breakup, and Akira Okudaira, a first-year high school student. After ten years, the two girls reconnect. Together, they try to help each other go through romantic relationships and figure out their sexual identity.

On the surface, the series appears to be your typical lesbian anime, but, in actuality, it’s devoid of the standard tropes of the genre.

The series focuses on the relationships between all its characters — including side characters — instead of only focusing on the protagonists. Viewers get the opportunity to see not only love affairs but also true childhood friendships, not the kind typically used as a vehicle for the characters to fall in love with each other.

On top of that, there are several male characters involved in the protagonists’ lives, which is rare in a yuri series. All of this makes Sweet Blue Flowers a relatable and realistic portrayal of modern relationships.

Cheeky Angel is a 50-episode series centered around a beautiful girl named Megumi. She’s so stunning that some people even call her an “angel” (hence the title). However, behind that beautiful face lies a shocking secret: Megumi used to be a boy!

When Megumi was nine, he came across a magic book with a genie inside. When blood is applied to the book, the genie grants one wish. So, Megumi made a wish to be the manliest man in the world, but instead, the genie transformed him into a woman. A few years later, Megumi is an attractive high school student who’s still a boy inside. Miki, Megumi’s best friend who is a girl, tries to turn Megumi into a sophisticated young woman, but Megumi is determined to stay in touch with her masculine side.

Cheeky Angel addresses several gender identity questions, such as, what does it mean to be a woman or a man and how does a person decide who they are inside?

Miharu is a mischievous boy who unknowingly possesses a powerful technique known as hijutsu – a skill that many ninja clans desire to become the ruler of the ninja world. One day, Miharu’s classmate Kouichi and English teacher, Kumohira, start a new club called “Way of the Ninja.” They both try to persuade Miharu to join the club, but he keeps rejecting them. Unbeknownst to him, both Kouichi and Kumihora are Banten clan ninja. After numerous ninja attacks, Miharu has no choice but to join their club as a means of survival.

Bit by bit, Miharu comes to understand the powerful technique that he possesses, and for him to survive these attacks, he has to become the ruler of Nabari.

Although the premise of Nabari No Ou is Miharu’s hidden technique, it also focuses on bisexual and homosexual relationships between the characters.

Wandering Son is one of the highest-rated LGBTQ anime around. The series follows Shuichi, a shy preteen boy who transfers to a new school. There he meets the tomboyish Yoshino who sits at the desk next to him. Soon they become great friends and discover they share one thing in common — they are both transgender.

The two classmates become close friends and learn to deal with the realities of growing up, transsexuality, relationships, and acceptance. The journey of Shuichi and Yoshino serve to educate viewers about gender identity as it addresses gender identity themes through both of these characters.

Yuri!!! On ICE became popular in the fall of 2016 and reached our list of best anime of the year. And although there are many reasons for Yuri’s success — animation, soundtrack, choreography — it was the relationship between the two main characters that made the series revolutionary and famous.

The bond between Yuri Katsuki and Victor Nikiforov did not fall prey to the cliches plaguing Yaoi (Boys’ Love) and Yuri genre (Girls Love). Instead, the gay anime series offered a view on the emotional rollercoaster ride of a couple who help each other out and support one another through major life obstacles.

While Revolutionary Girl Utena has received much praise due to its LGBTQ themes, the series goes much deeper than that. After Utena’s parents died, a traveling prince consoles her and gives her a ring bearing a strange rose crest. Moved by this mysterious prince’s chivalry, Utena vows to become a prince herself one day. A few years later, Utena attends Ohtori Academy where she dresses in a boy’s uniform so she can be like the prince she met long ago.

Aside from breaking gender stereotypes, Utena participates in a dangerous duel for a unique prize: the Rose Bride, Anthy Himemiya, and her mysterious powers. But, as she gets closer to Anthy, she must now fight for her friend’s safety and discover the dark secret that the Academy holds.

Revolutionary Girl Utena, in every sense of the word, revolutionized the anime industry. The series explores a range of themes from feminism to queer topics to deconstructing the prince fairytale genre.

Based on a popular manga of the same name, Citrus follows Yuzu Aihara, a fashionable teenage girl who is set on finding romance and make new friends. However, her dreams come crashing down when her mother remarries and transfers Yuzu to an all-girls school. To make matters worse, the uptight student council president, Mei, continually harasses her. And on top of that, she happens to be Yuzu’s new step-sister. However, as the two girls start sharing a bedroom and getting to know each other better, Yuzu discovers new feelings towards Mei.

While Citrus isn’t the perfect representation of same-sex relationships, viewers can still empathize and relate to the main characters. Through Mei and Yuzu, viewers can partially explore serious topics that LGBTQ people go through, such as, emotional trauma, societal expectations, and sexual assault. And although the series has its dark moments, it also has many cute and funny scenes. The anime is the perfect combination of entertainment with a touch of realism.

From Kunihiko Ikuhara, the creator and director of Revolutionary Girl Utena, Yuri Kuma Arashi is set in a world where bears that have gained human-level intelligence and crave human flesh. So, humanity creates giant walls separating them from the outside world. Despite the barrier, bears can still break in and feast on humans. When Kureha’s mother falls victim to one of the bear attacks, Kureha decides to seek revenge for the attack.

Kureha soon falls in love with her classmate, Sumika, but the crush is cut short when Sumika also dies from a bear attack. Meanwhile, two girls, Ginko and Lulu, transfer to Kureha’s school, but there’s more going on than meets the eye.

Yuri Kuma Arashi uses a lot of metaphors and allegories to explore the difficulties that LGBTQ people face in Japan. Through Kureha, we see how someone who doesn’t follow societal norms gets shunned and excluded. Not only that, the series is filled with visual symbolism, from the wall keeping humans and bears apart to its use of lilies to represent the anime’s lesbian characters.