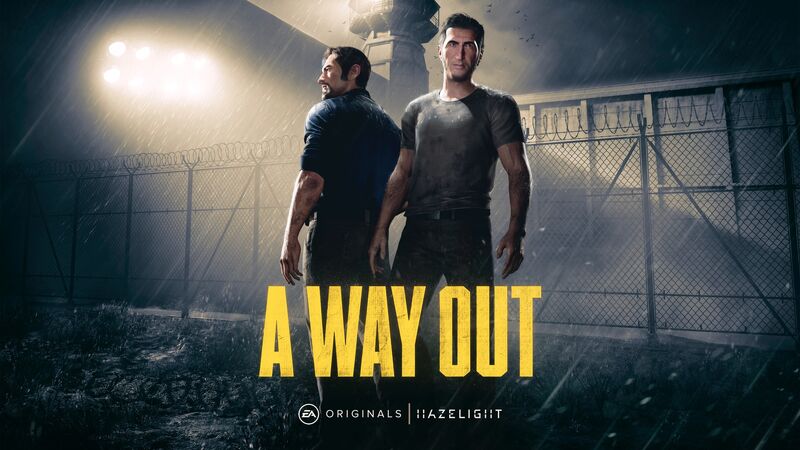 ‘A Way Out’ Review: Perfectly Paced Cinematic Action Without The Script to Match

Despite looking just as polished as your average Naughty Dog adventure, this narrative-led epic is actually the first game to attempt a cinematic, story-driven co-op experience. If that wasn’t impressive enough, it was made by a team of just 15 people.

Ever since its reveal at E3 2017 then, it’s been clear that A Way Out is an incredibly ambitious undertaking. But now that it’s finally here, has Fares and his tiny team managed to deliver upon that promise of a cinema-quality co-op experience?

The answer is both yes and no.

On the one hand, EA’s second foray into indie publishing offers up a perfectly paced and surprisingly varied experience that’s quite unlike anything else, pitting players against everything from deadly crime bosses to unforgiving rapids and a seriously intense game of Connect 4.

Yet, despite consistently being a blast to play, unfortunately, a woefully lacklustre script prevents A Way Out from reaching the giddy heights some may have expected it to.

As our thirst to explore sprawling and immersive worlds grows, so do the teams that make them.

Where back in the low polygon PS2 era 40-50 person teams brought us the latest best-selling RPG, now, pulling off a modern cinematic experience like Uncharted 4 requires hundreds of extremely skilled developers. It’s been worth it though, with the latest interactive entertainment giving Hollywood blockbusters a run for their money.

Unsurprisingly, this has led to rapidly rising production costs — and with them many talented mid-tier game studios shutting their doors for good. Sometimes though, it takes a fresh pair of eyes and a hungry creator in order to see (and do) things a little differently.

That’s where A Way Out comes in. It’s a different take — though despite its makers’ filmmaking background, it excels in areas that might surprise you.

While Fares’ cinematic expertise is immediately evident as the camera swoops seamlessly from one expertly paced action scene to another, whenever the two protagonists open their mouths, we find ourselves immediately yanked out of the experience.

Despite Fares’ making his name in Hollywood and coming from a scriptwriting background, bafflingly, much of the dialogue in A Way Out feels shockingly ham-fisted. The opening hours are especially guilty of this – offering up more halfbaked exchanges and genre clichés than you can shake a Van Damme VHS at.

In other words, for a game selling itself as an engaging cinematic experience, the dialogue often feels disappointingly amateur. Thankfully, this became less of a problem as the story unfolded, but we’re not entirely sure whether that’s because the writing genuinely improved as their journey unfolded, or we simply got Stockholm syndrome.

Still, at least A Way Out’s premise sounds Hollywood enough on paper. Taking control of two very different convicts whose paths cross behind bars, one player is put in the shoes of tough guy Leo while the other sees the world through the eyes of the more wary and thoughtful Vincent. With both men desperately seeking their freedom after being framed for different crimes, the two reluctantly agree to work together to find – you guessed it – a way out.

Where most co-op games see each player experiencing the same story from an identical perspective, interestingly, A Way Out allows both of you to explore your surroundings in your own way. As each character leaves their cell and makes their way towards the rec area in the middle of the heavily guarded penitentiary, players are free to go their own way, taking in the sights as they see fit and talking to whichever guards and inmates they please.

This means that Fares’ latest offers the rarest of things in gaming — something that’s never been done before. Finally being given the freedom to explore a game world as two individuals — rather than just tied together at the hip — makes for a remarkably refreshing and novel co-op experience.

It helps of course, that Leo and Vincent are two very different characters. While most multiplayer games offer up an AI friend, A Way Out is an experience that is only playable with a human partner in tow — and it’s all the better for it. As our two protagonists learned to slowly trust each other and work in sync, the bond between ourselves and our partner quickly mirrored that of our on-screen avatars.

Except with more swearing, and slightly less wooden conversations.

Despite Fares’ insistence that you go on this journey with another human being, he’s aware that time is a precious commodity for most adults and has made one small concession — the implementation of online co-op.  While this is undoubtedly an experience that is enriched by yelling at the person next to you as you leap off of a virtual ravine, getting a friend over to play a seven hour game with you may not be the most practical thing.

Thoughtfully then, buying A Way Out allows you to gift a digital copy to one of your friends.

Refreshingly, this is a narrative-driven game that doesn’t just task you with killing people. Where Uncharted’s cutscenes depicting protagonist Nathan Drake as a loveable goofball  can feel bafflingly at odds with much of the series’ murderous gameplay, A Way Out ’s two relatable leads rarely take a life over the course of its seven-hour playtime.

More crucially, when they do it’s only because they’re in mortal danger. This may sound like an eye-rolling-ly simple thing, but it’s this kind of thoughtful convergence of narrative and game design that helps make (most) scenes feeling so grounded — even if the dialogue can be pretty ropey.

It’s what you’d expect from convicts on the run. Escaping is their number one priority – not slaughtering cops who are merely doing their jobs.

Yet, it’s not just how combat is used here that should be applauded, but also how sparingly virtual violence is implemented. While there’s certainly fun to be found in mowing down polygonal baddies with a friend at your side, playing a co-op game where combat only made up a small part of the overall experience was a refreshing change of pace.

Whether its one player keeping a lookout for patrolling prison guards as the other burrows out of their cell, or simply playing basketball with Leo’s son, great care has been taken in order to make sure that no two sections of A Way Out ever feel the same.

Where cinematic gaming experiences usually favour gunplay over character building, it’s great to see Fares and the team at Hazelight make the effort to double down on more original types of gameplay. Despite the cringey script, the overall story isn’t without its moments, and it’s an adventure that’s made all the better by an interesting narrative shift that creeps up on you later on in the journey.

While many game makers struggle to marry their storytelling vision with the unpredictable actions of a single player, the fact that this cinematic-driven co-op opus works as well as it does is a huge achievement. Ropey dialogue may keep this from being a must-play experience, but if you’re looking to embark on a compelling and surprising co-op adventure with a friend, A Way Out is more than worth the price of entry.