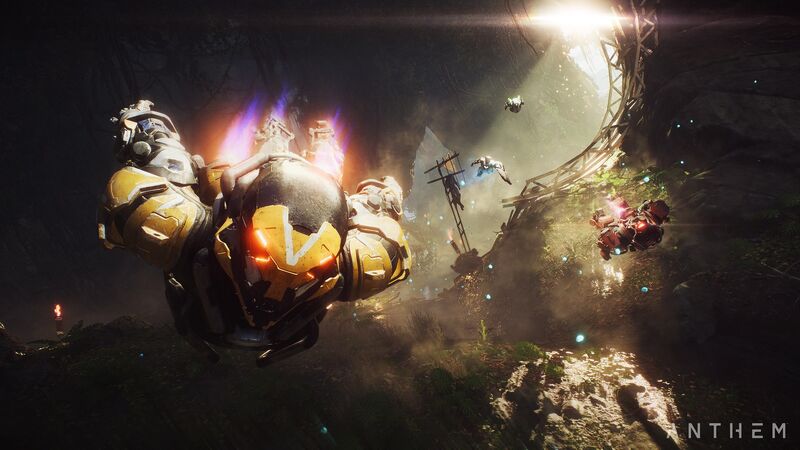 It’s disappointing, really, that Anthem has turned out this way. For years, the arrival of a brand new Bioware game was an event. A genuine gaming phenomenon. Yet, just two years after the disappointing Mass Effect: Andromeda, once again, its made a sci-fi shooter that’s arrived with less of a celebratory bang and more of a pitiful whimper. Frustratingly, when it finds its flow, this isn’t even a bad game. What it is, however, is an experience that’s weighed down by such a wealth of bad decisions that somehow, Bioware has managed to turn zipping around in a futuristic-looking Iron Man suit into something that feels repetitive and painfully dull.

The first sign that’s something amiss can be seen in the game’s wonky opening — a bombastic prologue that throws you straight into the chaos of a massive attack on…something…where proper nouns like ‘The Heart of Rage’ and ‘The Anthem of Creation’ are fired out as rapidly as the bullets in your assault rifle. No time is taken to let you settle into this new world of Javelins and Freelancers and Cyphers you’ve been thrust into – the game just wants you to start shooting.

Naturally, the mission goes completely awry, with only you and a handful of others emerging from the assault that will now, predictably, serve as your ultimate goal to succeed in throughout the game. However, after all those losses, the reputation of Freelancers (essentially soldiers for hire) quickly goes down the pan, leaving you tasked with redeeming yourself by completing some less than glamorous odd jobs throughout the land of Bastion.

Once there’s some room for it to breathe, Anthem starts to feel good to play. The first time you fly your Javelin through a truly gorgeous jungle full of glistening and cascading waterfalls, it’s hard not to be impressed. Soaring through the sky and rolling between lush and vibrant vegetation, you’ll instinctively stop and pause at the eye-popping vistas that loom over every cliff edge.

The combat is solid, too, showing further refinement from the mix of gunplay and special powers that improved vastly over the course of the Mass Effect series. Whether you’re piloting the bulky Colossus Javelin, steering the more nimble Interceptor, blasting away with the magic-infused Storm Javelin or hedging your bets with the all-rounder Ranger Javelin, it all feels equally satisfying, as you hover menacingly over the battlefield or dash around to outmanoeuvre enemies while flinging fireballs and cracks of lightning. Once you get into the flow of combat, many of these abilities can be paired together in combo attacks that deal bonus damage and trigger with a wonderful ‘kerchunk’ sound effect.

It all feels like a recipe for hours of fun — and it should be. But sadly, solid flight mechanics and fluid combat cannot carry the game alone. It’s clear that the uncanny facial animations and immersion-breaking bugs of Mass Effect: Andromeda were the last things BioWare wanted to repeat for Anthem. Yet, once again, its neglected to make a game that actually entices you to play it.

Usually, for a BioWare RPG, the main draws are the game’s story and characters. Yet here, the team has massively underdelivered. Fort Tarsis is your base of operations this time around — your Normandy, if you will — where an assortment of eccentric, energetic or dreadfully stoic personalities reside that will give you missions, tinker with your Javelin or just want a word. Not all of them are in your squad in the traditional sense, but many will assist you during your adventure or play a part in the story.

Returning to see a map full of icons promising conversations with these characters should excite and inspire in a BioWare game, but in Anthem it mostly just irritates. You half-listen to whatever dry or ridiculous spiel is on their empty minds for the day, each time throwing in a left trigger or right trigger press to select one of two choices that continue the conversation without even slightly affecting its outcome. And then slowly walk between the dead streets of the city to find the next statically waiting NPC. It all just feels like pointless jibber jabber that’s preventing you from going out on that next expedition and progressing the story.

And when you finally do, get into an expedition? Well, you don’t really get the chance to pay attention to the story either.  Anthem encourages — almost insists, in fact — that you play with other Freelancers in order to have the best experience. While that may be true when you’re playing with friends, grouping up with random players is often a recipe for disaster. You can try to pay attention to the story, but soon the nattering of characters in your ear gets lost between combat and attempting to keep up with that one other player who just wants to quickly press on ahead to the pew-pewery.

No job too dull

And you can’t blame them for dashing off, to be fair, as everything Anthem asks you to do feels so dull. Legitimately, there are about four of the same objectives that crop up in missions: collect the things, deposit the things, defend a thing and kill all the things. Even with multiple enemy types, they all essentially offer the same challenge without requiring you to adapt your strategy. Similar games in this style such as Destiny 2 and The Division can be equally as guilty of these unimaginative tasks, but it’s the moment-to-moment gunplay or drive towards better loot that still keeps you firing away.

In Anthem, though, the rewards are just as boring as the tasks you’re given. Missions regularly reward you with standard assault rifles, shotguns, pistols and all the most standard shooter fare. Sure, each new version you earn offers a slightly higher damage number than the last one, but in Anthem there’s never any thrill to finding a cool new piece of gear. Here, the powers are the main draw, and the weapons feel like a dull and uncessary after though.

It doesn’t help that you can’t see what equipment you’ve gathered until after a mission is over and you’ve sat through a rewards screen that totals up your experience points and other gubbins. Even more frustratingly, you can’t change equipment during a mission. Instead, you have to wait until you’re back in good old Fort Tarsis where you even have to go through an actual loading screen to open up the Forge and tinker with your Javelin. Madness!

It’s a game built on solid foundations, that simply helps you lose sight of that by stacking up loads of unnecessary busywork  on top of them.And that’s ultimately Anthem’s biggest problem: there’s no flow – everything just feels like a faff and a chore.

With Anthem, you can never get into the same rhythm of a Destiny or The Division because of how stilted the setup is. None of this changes in the end game, where you’re presented with yet another checklist of stuff to do or run the dungeon-style Stronghold missions at higher difficulties for more loot. There’s just absolutely no strong impetus to continue to play.

Is Anthem any good?

What disappoints so much about Anthem is that there are sparks of potential in there. Flying around in your Javelin and queuing up combo attacks with other players can be a blast. But then you discover that you’ll have to back out to Fort Tarsis during Freeplay every so often in order to continue earning experience points. Or you’ll be killed and stuck staring at a red screen waiting until a player feels like reviving you. Or you’ll want to customise your Javelin and find there are no interesting cosmetic options that aren’t behind a paywall.

In fairness, BioWare is issuing a day one patch that intends to tweak or fix a number of the issues that have plagued the game so far. With these games as a service, too, there is room for them to grow and improve over the coming months. You only have to look at the incredible job Ubisoft did with The Division and Rainbow Six: Siege to see evidence of that. Right now, though, Anthem is in a bad state –- and no patches or performance improvements are going to be a quick enough fix to solve the fundamental problems that make it such an unfulfilling game